Toyota emerges as as an example of a global company regaining its glory with its innovative ideas. Its consumer-centric innovation helped in establishing connect with young consumers.OTHER CASE STUDIES: Ford | Burberry | GE | Toshiba-UPS | Hollard-PEP | Safaricom

In the early years of the 21st century, executives at Toyota's US headquarters faced a dilemma. The Toyota brand was perceived as old-fashioned and was failing to appeal to the country's youth. This was a segment of significant importance - the population of Gen-Y, or people born after 1977, outnumbered Gen-X, or those born between 1965 and 1976, by nearly 50 per cent. Competition had already started to capture this younger market - Honda Element, VW Golf, BMW Mini, amongst others. Given previous failed attempts, Toyota needed a new approach to tap into this increasingly relevant cohort of new car buyers.

Following thorough consumer research, Toyota was able to identify compelling insights about the mindset of Gen-Y. This was a generation that assigned greater importance to individualism, and was far more web savvy than previous generations. It wanted its vehicles to make a personal statement without burning a hole in the pocket. It was relatively immune to or sometimes even repulsed by traditional car salespersons and marketing techniques.
TODAY'S CONNECTION
Toyota's innovative Scion brand has been a big success since its launch in 2002, but now, sales have moved into a downward curve. In October 2011, sales fell 18.3 per cent to 3,952 units in the US. New cars such as the four-seater iQ and entry into new countries such as Canada might help lift sales
In 2002, Toyota launched Scion, a new sub-brand targeted at young buyers. Scion offered customers a choice of three standardised models, with a large number of optional accessories that gave buyers tremendous freedom in personalising their vehicles. Each model was competitively priced below $20,000, as Toyota sacrificed margins on the vehicle in order to profit from accessory sales, whilst simultaneously hoping to establish "cradle-to-grave" loyalty - that is, from Scion to Toyota to luxury brand Lexus as a young person's age and income advances. However, Scion's innovativeness did not end with product features. The use of channels to market the cars and manage the business model was also a cornerstone of the innovation. Channel innovation in reaching consumers makes marketing and delivery critical, given the target audience's media consumption habits and unfavourable attitude toward hard-selling. Scion's marketing team responded by focusing on web-based initiatives and non-traditional marketing techniques designed to create a "pull" effect for the product, rather than explicitly "pushing" it.


OTHER CASE STUDIES: Ford |  GE | Toshiba-UPS | Hollard-PEP | Safaricom Scion's website allows potential buyers to customise their cars online - a feature so popular that by 2005, the site was receiving a million hits a month. Around this time, it was estimated that two-thirds of buyers configured their cars on the website with the colours and options they wanted before walking into the dealership. Scion was the first automaker to run a campaign on the online virtual world 'Second Life', releasing virtual cars at various points in the popular "metaverse" for citizens to 'drive' and, of course, customise.

Click here to Enlarge
Scion also launched in Whyville, another virtual world for teenagers, where Toyota also provided an educational slant by allowing members to take out virtual car loans through the site's Club Scion and Toyota Financial Services. 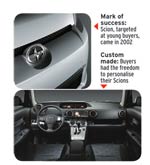 Click here to Enlarge
The company supplemented its web activities with real-world initiatives such as supporting up-andcoming hip hop artists, hosting nightclub events and backing budding filmmakers, with a clear focus on seeking out the next underground sensation. To solidify this image, Scion's "tattooed, pierced and dreadlocked crew" held test-drive events in front of popular restaurants, clubs and record stores, whilst print advertising buy was restricted to underground magazines.

Scion's innovative channel campaign was quick to deliver results: When Gen-Y was asked to name the brands it would consider for its next new car purchase, Scion rocketed from No. 30 in 2004 to No. 9 in 2005, according to Kelley Blue Book, an automotive vehicle valuation company in the US. The impact was visible in sales too: In the first quarter of 2005, Toyota had sold 32,972 Scions - more than Volvo or Suzuki and only slightly less than Mitsubishi, all erstwhile established players in the relevant vehicle classes.