Tips to profit from most favoured sectors in stock market today

The list of favoured sectors is changing constantly. While infrastructure, banks and power sectors look promising as this year's investment cycle starts to roll, selective approach in sectors such as telecom, automobile and pharma can also give good returns.

Sowmya Kamath
You must invest in stocks for the long term. This evergreen advice by market experts must be read with a caveat - you must be ever ready to change course to gain from the changes in market cycles .

"This year, the market is betting on cyclical sectors such as automobile, engineering and construction. I would like to include private sector banks in the list. Apart from these, telecommunications and regulated power utilities have good cash-flow visibility," says Manishi Raychaudhuri, head of research, BNP Paribas Securities India.

"Two sectors where there is value and are likely to perform well over a 6-12 month horizon are banking and infrastructure," says Toral Munshi, head of India equity research at Credit Suisse Wealth Management.

While some experts are cautious on power and infrastructure, they are not as bearish on these sectors as they were in 2011.

We are not as negative on power and infra as in 2011 but we prefer cash generating sectors such as consumer durables, staples & telecom.

"We are not as negative on power and infrastructure as we were last year but we continue to prefer cash flow generating sectors such as consumer durables, staples, telecom and pharma," says Jitendra Sriram, director and head of research, HSBC India.

GROWTH TRIGGERS
The stock rally since the start of this year is believed to be powered by foreign institutional investors.

Besides, the sentiment improved when the Prime Minister's Office stepped in to revive the power sector by ensuring coal supply and state electricity boards, running huge losses, started raising tariffs.

On interest rates, the Reserve Bank of India, or RBI, has said it is done with increases for now. There is widespread expectation of rate cuts in the coming quarters.

These factors have built expectations that engineering and construction and rate-sensitive sectors such as banking and power will be the favourites this year.

This year, bets are on cyclical sectors such as automobile, engineering and construction. I would like to include private sector banks also in the list.

However, following a theme blindly may lead you to losses. "In sectors, investors should focus on companies with low debt and good execution ability and dividend record," says Raychaudhuri.

ENGINEERING & CONSTRUCTION
The market is betting on engineering and construction companies as the Planning Commission has proposed an investment of $1 trillion in infrastructure in the 12th Five-Year Plan period (2012-2017). Any interest rate cut will be another plus as these companies have piled on huge debt in the last few years.

In fact, high interest rates and fewer government orders were behind the slowdown in the sector in the last two years. The result was that the Bombay Stock Exchange (BSE) Capital Goods index fell 15 per cent in the year to February 2012, the biggest loser after the BSE Metals index, which fell 23 per cent.

The capital goods index is not a precise barometer for engineering and construction stocks but gives an idea about their performance. Now, expectations of a fall in interest rates and recovery of industrial and capital expenditure cycles have renewed the market's interest in these stocks. L&T and IRB are the top picks of several foreign brokerages such as Deutsche Bank, Goldman Sacs and BNP Paribas. Most experts say that stocks in the sector have touched bottom and the risk-reward ratio appears favourable. The ratio measures returns a stock can give compared with the risk involved in the investment.

Larsen & Toubro - Engineering conglomerate:
The company is best placed to gain from the revival of the investment cycle with its exposure to diverse sectors and ability to execute complex projects. The company's valuations are at median levels, say experts. While order worries remain, L&T is expected to retain its high market share in the engineering, procurement and construction segment.

IRB Infrastructure - Road Developer:
Roads will be a big growth area with 35,000 km national and state highways expected to be built in the next three-four years. "IRB, because of this, will do a lot better than others," says Raychaudhuri.

IRB has a number of good projects in the pipeline and does not need external funds for projects under development. The company is facing moderate competition in the road space, Goldman Sachs has said in a report.

Risks:
"An engineering company always faces a risk that the expected recovery in orders does not happen. There are a couple of sectors in infrastructure, for instance roads, that are doing well. But we think that easing of interest rates and government's seriousness about awarding projects may lead to a pick-up in the investment cycle?may be from the second half of April 2013," says Raychaudhuri.

"The risk could be either due to domestic factors such as lack of government action or a global shock," says Munshi of Credit Suisse.

BANKS
With the RBI expected to stop increasing interest rates, bank stocks are due for a good performance.

"A reversal in the rate increase cycle will be a key driver of improvement in earnings. Also, a macroeconomic revival, which we expect in the second half of the year, will mitigate worries over non-performing assets to an extent," says Munshi of Credit Suisse.

However, experts are divided over which stocks will do well, with many believing that private sector banks are better placed in view of concerns over the non-performing loans of public sector banks. 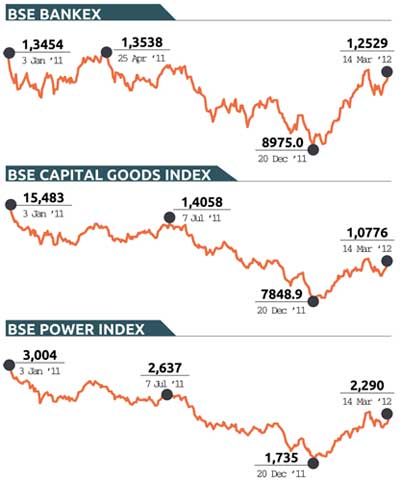 BSE Bankex
The reason for the high non-performing loans of public sector banks is the stress faced by small and medium enterprises and textile, steel and infrastructure sectors.

Experts also prefer private sector banks due to the general view that they are better at managing margins than the public sector banks.

"We think the difference in asset quality between private and public sector banks is likely to remain wide for a few more quarters, probably until India's credit down-cycle bottoms out and growth recovers," says Jitendra Sriram of HSBC.

"Axis is seeing strong growth. We see it benefiting from a strong current account, savings account base. It has a strong liability franchise which during times of falling interest rates may expand margins," says Raychaudhuri.

Some experts believe Axis Bank is not cheap. Is is the only private sector bank with a high proportion of impaired assets. "The main concern is perceived as the bank's exposure to the power sector but benefits from the sector's expansion will accrue in the future," says Manishi.

POWER
For long, the sector has been enervated by shortage of coal and funds and lack of distribution reforms.

Banking and infrastructure sectors are likely to perform well over a 6-12 month horizon.

Powergrid Corporation of India - State-run transmission utility:
The company is expected to be a key beneficiary of the pick-up in the capital expenditure cycle.

"We prefer Powergrid as the only regulated model with highly visible growth (20 per cent earning per share CAGR, or compounded annual growth rate) over three years on doubling of capital expenditure in the 12th Plan)," Deutsche Bank said in a report. The company is expected to report profit growth of 15 per cent CAGR over FY12-FY14.

The big risk is project delays.

VIEW ON OTHER SECTORS
While infrastructure, banks and power sectors look promising as this year's investment cycle starts to roll, selective approach in sectors such as telecom, automobile and pharma can also give good returns.

The defensives will give moderate returns unlike the outperformance we saw last year. Metals will continue to face slowdown until there is more clarity on the global economic situation.

Real estate looks promising but requires a selective approach as there are many companies in the sector which lack growth visibility and have too much debt.