General elections in India have had an immediate impact on economic growth. You should be aware of such implications since elections are around the corner.

{mosimage}Several centuries ago, Plato declared that all conventional political systems were inherently corrupt. Since then, generations of politicians all over the world seem determined to prove him right. This explains why few people now follow political developments. Which is unfortunate since politics affects almost everything. More importantly, general elections in India have had an immediate impact on economic growth. You should be aware of such implications since elections are around the corner.

Consider this: in nine out of 14 general elections in India, the economy has grown during the year immediately following elections. However, since the 1990s, the formation of seemingly unstable coalition governments at the Centre have had a negative impact on growth in the year after, except in cases where voters seemed excited and positive about the change in government. This was the case in 1997-98, when the BJP-led NDA government came to power, and in 2004-5 when the Congress-led UPA took over the reins. Also, whenever elections have been held just before the month of March, or just after, the chances of higher GDP growth rates in the immediate year have been higher. Possibly, this is because the timing of the polls gives more time—13-23 months— to policy-makers to take the right decisions. 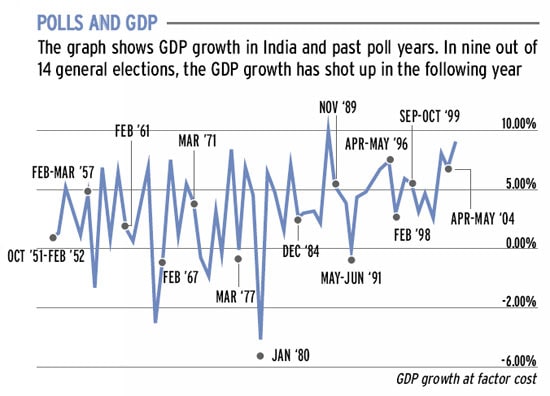 The flip side can also be true. Economic conditions can influence the results of a forthcoming election. American scholar G. Patrick Lynch commented that economic conditions did influence the US presidential elections in the late 19th and early 20th century despite the minimal role of governments in economic policy. So, today’s economy can affect tomorrow’s politics as well. This, in turn, can fuel more changes, which can further impact the economy and, of course, your finances.

• Be politically aware as election years are usually followed by a period of robust economic growth.

• Also, figure out the kind of coalition that could come to power as unsteady alliances in the recent past have had a negative economic impact.