The BT 500 listings for 2010 have had their share of surprises - pleasant or otherwise. Companies and sectors that were out on a limb till last year have bounced back.

The BT 500 listings for 2010 have had their share of surprises - pleasant or otherwise. Companies and sectors that were out on a limb till last year have bounced back. Conversely, industries and businesses that were considered epitomes of growth and value creation stumbled. Whilst the automobiles, commodities and IT services were beneficiaries of a turnaround, telecom and real estate seem to have lost their magic touch. Our writers cut through the listings to pull out three trends - of outperformance and underperformance. The first: Axis Bank grows faster than the Top 2 in the private sector and closes the gap in rankings. Second: The telecom pack came crashing down as user revenues dipped. Third, and perhaps most fascinating, is the battle for the top spot in market value in IT services. Read on.

Mover and Shikha
The fruits of consistent growth are indeed sweet. Ask Shikha Sharma, Managing Director & CEO, Axis Bank. Over five years, India's thirdlargest private sector bank has grown at a compounded annual rate of 34 per cent in deposits, 46 per cent in advances, 47 per cent in revenues and 50 per cent in profits. 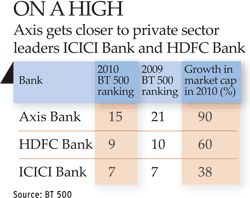 That feat is reflected in the BT 500 rankings, where Axis Bank has been one of the bigger climbers in the banking space. The 17-yearold bank is the fourth-largest in market capitalisation, which stands at a shade under Rs 53,000 crore as per the BT 500 - with SBI, ICICI Bank and HDFC Bank ahead of it (SBI has been ranked separately in the PSU listings). The big question, of course, is whether Axis will be able to sustain the growth momentum on a higher base. In Axis's favour is a strong distribution network (1,095 branches and 2,044 ATMs), which translates into a higher share of low cost deposits.

On the assets side, the bank has plenty of headroom to grow its retail book, which is just 20 per cent of the total advances. For ICICI Bank and HDFC Bank, the corresponding numbers are 60 per cent and 52 per cent, respectively. So, what is the downside? "One of the biggest challenges for the bank is to keep its asset quality in check with 20 per cent of the loan book in the small and medium enterprises segment," warns Sanjeev Patkar, Director (research) at Almondz Global Securities, an equity research firm.

The good news is that Axis is a pure organic growth story with no signs of excesses in various pockets. Watch out ICICI and HDFC Bank.

Sunil Mittal
The top three listed telecom companies Bharti Airtel, Reliance Communications and Idea Cellular together have lost just under Rs 60,000 crore in market value, a collective drop of a little over 25 per cent as per the BT 500. The value erosion for Bharti stands at 24 per cent, at 38 per cent for RCom. and six per cent for Idea. Tata Teleservices (Maharashtra) is also down 30 per cent. 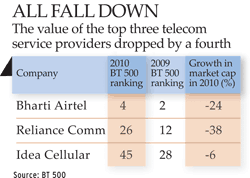 What is more, Bharti tops the list of losers in market capitalisation in absolute terms with RCom at No 3 on that list. Clearly, the disenchantment of investors is reflective of the tough times the telecom operators are facing. According to Kedar Sohoni, President of Informate Mobile Intelligence, the operators face difficulties on multiple fronts. "While the average revenue per user is dropping, SMS revenues have also stagnated. Today people have alternatives to access the Internet through Wi-Fi at home and office,"explains Sohoni.

The launch of 3G services will play a vital role in determining the future of mobile services. As Sohoni explains, while the rural markets for mobile will keep expanding, the saturated urban markets still have the liberty to spend Rs 200 to Rs 300 more every month for a new service; that maybe the entire budget for a rural user for more than a month. The upshot: for the telecom biggies, the battleground shifts to the cities again. 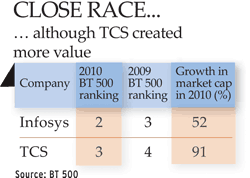 It is almost a photo finish at the top between IT services giants TCS and Infosys. The Bangalorebased Infosys has managed to pip its Mumbai-based, larger rival, TCS, yet again - but by a whisker.

Whilst the BT 500 is based on the average market value in the first half of the current fiscal year, at the time of writing on October 20, TCS was ahead of Infosys by Rs15,419 crore.

In the BT 500, both Infosys and TCS have climbed up a place, to No 2 and No 3, respectively. But growth in value over a year ago has been faster for TCS, at 91 per cent as against 52 per cent for Infosys. The gap in market capitalisation has reduced from Rs 21,869 core in the BT 500 of 2009 to just Rs 239 crore this year. TCS's efforts to improve margins have found investor-favour. Analysts also cite the fact that longer term hedging contracts - three year-plus - have worked in TCS's favour as the rupee has appreciated. Infosys on the other hand works on shorter such contracts. If TCS has to make a decisive move ahead, it will have to continue to outdo Infosys in volume and margin growth. And that is no easy task.