Thousands have invested in Money Plus on the ludicrously optimistic assumption that the fund value will rise by 25% every year for 20 years.

You can envy Shankar Dutt for his luck. The Delhi-based accountant has just bought a cracker of an insurance-cum-investment plan that promises to multiply his money manifold and make him a millionaire. Dutt will pay Rs 10,000 a year for three years and expects to reap a bountiful tax-free harvest of Rs 16 lakh after 20 years. Plus Dutt gets insurance cover. No fl-by-night operators here — the Money Plus unit linked insurance plan (Ulip) is from one of the oldest and most respected names in the investment sphere, the Life Insurance Corporation of India (LIC). What’s more, Dutt gets tax benefits on the premium he pays every year. It can’t get any better.

Or any worse. Dutt and thousands of others (including Dutt’s elder brother) have invested in Money Plus on the ludicrously optimistic assumption that the fund value will rise by 25% every year for 20 years. Not even the most bullish fund manager on Dalal Street would promise such returns. A simple calculation reveals how ridiculous the assumption is. If Money Plus does indeed churn out 25% annualised returns, we can conservatively expect the benchmark index (Sensex) to rise by about 15% every year. So, the agent who sold Dutt the Ulip wants him to believe that the Sensex would touch 2,12,000 points by 2027. Dutt made the cardinal mistake of not verifying if the claims of fantastic returns were made by the LIC itself or by the agent. When the reality dawns on him, his delight may turn to distress.

In another part of the country, Hyderabad, software engineer Ashwini Garg cannot hide his disgust with the “bull**** returns” that his endowment policy promises. The 24-year-old bachelor was sold the Jeevan Anand endowment policy by a “family friend” as a tax saving option in March 2006. He will pay Rs 29,500 every year for 21 years to get about Rs 13 lakh on maturity in 2028. That works out to an annualised return of about 6%, if you don’t take into account the Rs 60,000 life cover that Garg has.

From Delhi to Dispur, software engineers to school teachers, people earning Rs 1 lakh a month to Rs 1 lakh a year, financial products are being used to dupe everyone everywhere. Varying degrees of investor ignorance command different conning strategies ranging from the subtle to the in-your-face. There may be no big shark out there which will gobble up your money at one go. No Chain Roop Bhansali making off with your hard earned money. Rather, it is a big shoal of piranhas nibbling away small chunks of investors’ wealth. It happens in instalments and small proportions so that many do not even feel the pain. What’s the big deal about losing Rs 1,000 in the equity markets or being charged Rs 300 for a credit card you didn’t ask for? But add them up and you have a gargantuan figure. MONEY TODAY estimates that these small losses add up to about Rs 10,000 crore a year. That’s twice as much as the Harshad Mehta scam. 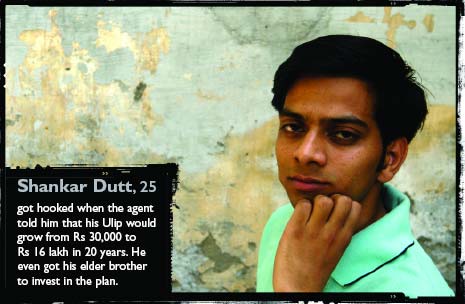 Walking in with eyes wide shut

Unfortunately, investors are walking into these traps blindfolded. Ghaziabad resident S. Poddar admits as much. The engineer with the public-sector NTPC was approached by a neighbour for opening an online trading account with a Delhi-based brokerage house in early 2006. Poddar, a novice to stock investing, agreed and deposited Rs 50,000 in his account.

Two weeks later, the company sent him a contract note, which is an acknowledgement of a stock market transaction. Then another one came along. Poddar casually asked and was told by his neighbour that he had bought some stocks on his behalf and was making profits. The thought of making good money lulled this otherwise careful engineer into slumber. All was hunky dory till May, when the markets crashed. That’s when a panicky Poddar contacted the company only to be told that his neighbour had traded shares worth almost Rs 25-30 lakh on his behalf in the past four months and that the account balance was zero. “I walked into it with my eyes closed,” he rues.

A former investment advisor, who used to work for leading private sector bank, says that businessmen, especially street smart property dealers, are sitting ducks for agents trying to palm off Ulips. “Property dealers treat all investment like real estate. They just want to know in how much time will the investment double. Give them any time frame, show some supportive data, and they sign on the dotted line,” she confesses.