Specials
BT Specials
Magazine Archives
News
Magazine
Cover Story
The process of handing over an ultra-exclusive Ferrari is as distinct as the car itself.

The process of handing over an ultra-exclusive Ferrari is as distinct as the car itself.

The process of handing over an ultra-exclusive Ferrari is as distinct as the car itself.

At the Ferrari panel shop in Maranello, Italy, a Ferrari craftsman examines the vehicle's allaluminium chassis
John Sarkar
The crescendo of angry V12 engines filled the crisp morning air, as this well-heeled New Delhi businessman - who does not want his identity revealed - and his newly-married wife drank their cappuccinos in the balcony of Maranello Palace, a hotel that stands right in front of a new Ferrari wind tunnel entrance in Maranello, Italy. The night at the hotel had not been particularly comfortable.

Baby-soft goose down pillows didn't stand a chance against the high-pitched snarls of Ferraris criss-crossing the neighbourhood.

A little later, the couple walked to the gates of the Ferrari factory across the road. A man clad in jeans and a Ferrari windcheater greeted them and ushered them through the security checks. The gates opened to reveal the low slung profile of a brand new black Ferrari 458 Spider. The wife grabbed her husband's arm, let out a polite shriek and said: "There you go, honey, that's your wedding gift!"

The man stood still for a moment. A sports car aficionado, he had known this was on the cards - his fatherin-law had planned everything in advance - but taking delivery of his dream supercar in Ferrari city was still special. He executed a coup de grace. He scooped up his beaming wife and gave her a peck on the lips. The men around him smiled. Their job was done. Another dream had been delivered.

In contrast, closer to home, apart from a gleaming white 599 GTB Fiorano on display, Ferrari's small showroom at Janpath in New Delhi is a discreet affair. "Customers walk in here to customise their cars and place their orders," says Ashish Chordia of Ferrari India, which imports the cars. "However, if they want to take delivery in Maranello, a factory collection can be arranged." Ferrari addicts in India do prefer to fly down to Maranello, he says. "They can drive around the legendary town for a while and then we arrange the logistics to ship the car to India for them," says Chordia. For cars that come with a price tag between Rs 2.93 crore and Rs 4.46 crore (ex-showroom Delhi), the delivery process is an experience, a special occasion. "It usually takes a month for the car to be shipped to India. But if you want yours faster, you have to pay air freight, which usually ranges between Rs 12 lakh and Rs 15 lakh," says a Ferrari salesman, requesting anonymity.

Here's how it works. First, a client walks into the showroom at Janpath. According to the showroom's database, it's always a male along with a friend. He is well aware of the product and hardly ever wants a test drive. He, however, is keen to see the final effects of customisation.

So, along with the sales staff, he sits at the simulator and builds his car. Customisation choices range from special body colours, such as Azzurro California (light blue), a historical Ferrari colour, to forged alloys. And befitting a brand of Ferrari's calibre, the options are not only exotic but endless. "If you want the fabric of your jeans to adorn the trims inside the car, we can do that too through the Ferrari Tailor-Made programme," says the salesman. The minimum cost of customisation under this programme is $50,000 or Rs 30 lakh. 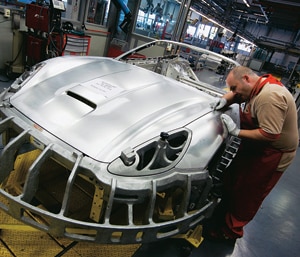 A Ferrari going through its 'aesthetic compliance check'
"Clients will be invited to Maranello as part of the programme, where they will find a dedicated space that looks and feels like an haute couture studio with a huge array of materials, treatments and colours to choose from," says Chordia. One can, for instance, configure a 458 Italia model inspired by the Ferrari 312 T with which Austrian Niki Lauda won the 1975 Formula One World Championship. The interior of the car will feature seating with the special material used for F1 at the time, and aluminium in place of the mats, and some other details to recreate the original interior atmosphere.

If the client, however, is satisfied with the exhaustive options he finds on the simulator in New Delhi, he will be emailed a PDF of the invoice which will bear the final cost of the car along with the bespoke fittings, as well as a digital rendering of the vehicle. Executives at Ferrari India confirm that some demands for customisation are really 'exotic', but unlike other ultra-luxury carmakers which might give in to a client's craving for a pink car, Ferrari draws the line when it becomes absolutely necessary to preserve the core values of the company. "You will never see a pink Ferrari," officials say with deadpan expressions. On display: A Ferrari California (L) and a 458 Italia at the Ferrari India showroom at Janpath, New Delhi
"Once the client pays 20 per cent of the final price of the product as booking amount, the engineers at the Ferrari factory in Italy start building it," says the Ferrari salesman. "We usually take around three to seven months to deliver the car. And once it is ready, the client needs to pay 40 per cent of the total amount. On delivery he pays the rest."

At the factory in Maranello, with a client's configuration, every Ferrari car that rolls off the assembly line is unique. Ferrari engineers have four million different ways to build a car from scratch. These unique combinations along with the meticulous engineering process make the delivery of a Maranello-made exotic a prolonged affair. "The client receives information on his car at regular intervals as part of the waiting list management programme, including a scale model of the car with exactly the same options which the actual car will have," Chordia says. "Some of them even want to visit the plant in Italy to see their car being built."

It is ironic that some of the world's fastest cars take such an excruciatingly long time to hit the road. Every work of art, nonetheless, comes at a cost. And time seems to be the biggest of them.