Luxury watches are more for fashion statements than telling time

Luxury watches are not about telling time. Indian watch snobs are also buying top-end timepieces to make a fashion statement.

Originally launched in 1955, the OMEGA Ladymatic costs Rs 14.5 lakh
Two years ago, Swiss luxury watchmaker Hublot came out with a limited edition rose gold watch to mark the first Indian Grand Prix. Sporting the Formula One logo and the colours of the Indian flag on its dial and strap, it was priced at a jaw-dropping Rs 23 lakh. But that didn't deter buyers. All 200 pieces were snapped up. "For such buyers, just owning the brand is not enough. The entire pre- and post-owning experience counts," says Ashok Goel, the brand's sales consultant in India.

It is, clearly, the best of times for luxury watchmakers in India. Thanks to TAG Heuer's assocation with Shah Rukh Khan's ubiquitous face, many Indians think of the brand when they think of high-end watches. But India's romance with top-end brands began before Khan was born, and it was not confined to Rolls-riding maharajas. If Eric Clapton had his 1971 Rolex Daytona ($505,000), our aam aadmi president Rajendra Prasad had his 18-carat, pink-gold Rolex Oyster ($440,000), which went missing from his memorial in Patna only to reappear decades later at an international auction. As the country's economy has boomed, creating several new billionaires, Indians have learned to carry their watches with elan. And although Wipro's Azim Premji, among the richest Indians, sticks to his HMT, everyone from Rolex and OMEGA to Breguet is vying for a slice of India, one of the world's fastest growing luxury markets.

Industry experts peg the luxury watch business at Rs 1,000 crore, and estimate it is growing at about 20 per cent a year. Rolex has an advantage over its nearest rival OMEGA because it has always been a more familiar name in India, but competition is fierce. "India has been known for its enriched culture and passion for inheritance, and Rolex has been amongst the most treasured heirlooms among generations," Rolex says in a statement. "A Rolex timepiece is amongst the most recognised and most recognisable from a collection of legendary watches."

Many luxury watches are not just fashion accessories. Sometimes they are pieces of art. Traditionally, jewellery watches for women were the biggest sellers. With 24 carat gold straps and brilliant diamonds, they commanded a huge 70 per cent share of the market because they were also regarded as an investment. But times are changing and over the past five years, the luxury watch market has grown beyond just pretty pieces for women. Top-end watches are collectors' items, with some people forking out more than a crore to have one on their wrists. Watch snobs count the number of complications in a watch; the more the complications, the higher the price. Some complication watches display the phases of the moon, others micro measure time down to 1/1,000th of a second while many display multiple time zones at the push of a button.

One of the biggest statement-making pieces in the luxury watch market is the tourbillon, French for whirlwind. The tourbillon was invented more than two centuries ago by Swiss watchmaker Abraham-Louis Breguet and is hugely popular because it aims to counter the effects of gravity by mounting the components in a revolving case that sits visibly on the watch dial. New models are created every year with the cheapest starting at almost Rs 3 lakh. Franck Dardenne, General Manager, TAG Heuer India, says - 'Our bet was to create a subsidiary in 2002 and renounce our margin in order to offer our watches at the same price in India as in Switzerland, London, or Dubai and offer our full range here.' PHOTO: Aditya Kapoor
Indians are paying through their noses for these glam gadgets. Jaeger-LeCoultre sells the Grande Reverso, created in 1931 at the request of British soldiers in the Indian Army who wanted a watch that could withstand the jostles of a polo match. That Indian connection has kept the watch a popular choice in India. Ulysse Nardin's Alexander the Great Minute Repeater costs a whopping Rs 3.5 crore while Chopard's diamond-studded L.U.C Tourbillon Lady isn't exactly cheap at Rs 2.47 crore. Sachin Tendulkar's favourite Audemars Piguet Royal Oak Offshore Self-winding Tourbillon costs Rs 1.2 crore. That almost makes Richard Mille's Felipe Massa 011 at Rs 82 lakh or Breguet's Classique 5717 Hora Mundi at Rs 37 lakh seem reasonable.

Yashovardhan Saboo, CEO of India's largest luxury watch retailer Ethos & KDDL Ltd, thinks the industry is poised for robust growth. Ethos already has 38 boutiques across India and plans another eight within the year. However, he says one of the biggest hurdles is the complicated tax structure, which pushes the majority of Indians to shop abroad instead. A 2012 survey by a watch chain showed that 60 per cent of all over $5,000 watches purchased by Indians are bought overseas. "There is a pyramid of taxes we have to go through, with almost 40 per cent going to duties, creating a serious hurdle in pricing watches competitively," says Saboo. 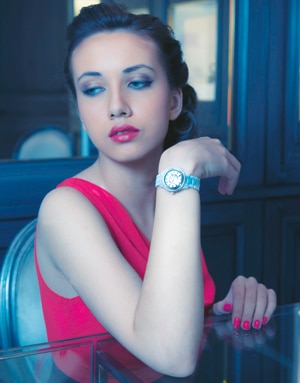 GLAM GADGETS: The Dior VIII in white ceramic, priced between Rs 3.5 lakh and Rs 14.8 lakh, is widely available at retail stores in India. PHOTO: VIVAN MEHRA
Most major players agree that with tax rationalisation, an increase in the number of boutiques and growing understanding of different brands, the market could grow by up to 50 per cent a year. Meanwhile, some watch brands have responded by eliminating the import cost from their margin. "Our bet was to create a subsidiary in 2002 and renounce our margin in order to offer our watches at the same price in India as in Switzerland, London, or Dubai and offer our full range here," says Franck Dardenne, General Manager for TAG Heuer India.

Others are just focusing on creating brand awareness among savvy consumers. The move to create awareness includes a big push into smaller towns and cities with huge amounts of untapped wealth. While the top five cities represent 80 per cent of nationwide sales, the push is on to bring such watches closer to people in cities such as Pune and Ahmedabad. Ethos has opened outlets in Nagpur, Ludhiana, Aurangabad and Surat, and plans to open in Vadodara, Amritsar and Coimbatore. "Communication has to be well-executed for success," says Anil Madan, director of Delhi-based luxury watch retailer Johnson Watch Co.

Most luxury watchmakers have roped in celebrity brand ambassadors. Rolex has signed on tennis player Ashok Amritraj and musician Anoushka Shankar to sell its products while Rado is endorsed by movie star Hrithik Roshan and TAG Heuer shares a long history with actor Shah Rukh Khan. Longines uses Aishwarya Rai Bachchan for its campaigns. Clearly, luxury watchmakers are ahead of their time.