News
Magazine
Cover Story
N. Srinivasan on how he brought India Cements back from the debt

N. Srinivasan on how he brought India Cements back from the debt

"The crisis that set India Cements back by a few years taught one thing - never expand in a fractured market using debt," says Vice Chairman and MD N Srinivasan.

In the mid-1990s, with a capacity of just 2.6 million tonnes, India Cements risked becoming an also-ran. That set us thinking and we decided to become a large regional player in the South. Between 1997 and 1998 we acquired Visaka Cements and Cement Corporation of India's Yerraguntla unit (both in Andhra Pradesh) through competitive bidding.

In June 1998 we took over Raasi Cements (also in AP) through a hostile acquisition. Simultaneously, we also set up a new plant at Dalavoi, Tamil Nadu. In less than two years, our capacity had catapulted to nine million tonnes. The acquisitions cost us Rs 1,600 crore and were predominantly funded by debt. 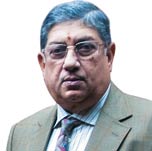 N. Srinivasan
What we did not anticipate was the rush by other cement companies in the region to set up capacities when the government withdrew all sales tax-related incentives.

SPECIAL: How these leaders turned around their companies

Without these incentives no cement plant was viable at the cement prices prevailing then. Capacity as much as 40 per cent of demand was added. Naturally, this sent prices crashing. At one point a truckload of sand cost more than a truckload of cement in parts of AP. We began to incur losses and our ability to service the Rs 1,750 crore debt in our books suffered.

THE CASE
Bought companies with debt. Could not repay when cement prices crashed
THE STRATEGY
Opted for a corporate debt restructuring scheme. Cut costs. Sold some assets. Went in for a GDR issue

We defaulted and lenders began harassing us. Such was the condition that we had to curtail production due to lack of working capital. We sold Vishnu Cements, which we acquired along with Raasi Cements, hoping it would ease pressure. But that was not enough.

We realised we were in a hole and opted for a corporate debt restructuring (CDR) scheme, which came into effect from January 2003. The CDR bought us time to focus on operations. We shed manpower (about 1,000 employees), cut production costs, sold our ships and some land.

Extraordinary situations demand extraordinary measures. So, in September 2005, we made an audacious move, coming out with a Global Depository Receipts issue while still in the CDR scheme.

Many warned us that it was an unwise thing to do. Investors would not even look at a company that had defaulted on its debt obligations, they warned. But we went ahead and raised Rs 477 crore, which was used to pay off some debt. That was the turning point.

Soon cement prices began to improve and this accelerated our revival. In the following years, we raised more funds from the market to fund our growth plans. Today our capacity stands at 15.5 million tonnes and we have expanded to North India as well.

The crisis that set us back by a few years taught me one thing - never expand in a fractured market using debt. When you have no control over prices, your ability to service debt will be impaired.