Five years after planting its flag in India, Google has just Infosys ahead of it as a dream office. Yawn...

Just what is the secret of Google's sauce? There is no doubt that the Internet search engine has a terrific algorithm, a model that most efficiently relates value to advertising spends, and brute-sized server infrastructure to deliver search results in nano seconds.

But at the heart of Google's success lies an extremely motivated and smart workforce that has created an enterprise worth some $187 billion (Rs 8.6 lakh crore), in a little over a decade. To be sure, most of that action has happened at its Mountain View, California headquarters. That it is the envy of companies competing to grab smart engineers—and increasingly marketers—in India, too, is borne out by BT-Indicus-PeopleStrong's Best Companies to Work For survey. Google India is ranked #2, after Infosys Technologies, as the best workplace in India. 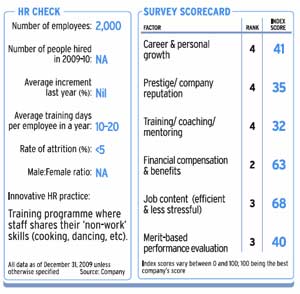 Click here to Enlarge
What makes Google a great place to work in? One answer comes from Manoj Varghese, Director, Human Resources, Google Asia-Pacific. "We give our employees an immense amount of freedom that comes with great responsibility," he says, borrowing a line from Yoda, the venerable Jedi master in the Star Wars series. A responsibility to make sense of the biggest pile of information in the world—the Internet.

The commitment to that responsibility starts at the top. In what Google calls "Thank God It's Friday" meetings, Googlers, as company insiders call themselves, log in from anywhere in the world to participate in a virtual session attended by at least two members of the executive board.

Occasionally, Google founders Larry Page and Sergey Brin or Eric Schmidt, the company's CEO, attend. "The guys who work here tend to be very well read and some of the interactions are really quite informative," Varghese says. India-specific meetings are led by top staffers such as Shailesh Rao and Vinay Goel, at times.

Such meetings come from Google's success in mastering the "crowdsourcing" philosophy, like no other company its size. Early in 2009, when Patrick Pichette, Google's Chief Financial Officer, wanted ideas to cut costs during the slowdown, for instance, he posted his query on Google Moderator, a service that ranks user-submitted questions by merit (decided through votes) in groups. Googlers chorused big and small ideas—like cutting back on in-house canteen menu options— that the firm claims saved it a few hundred million dollars.

When it comes to appraisals, Google again gravitates towards a Switzerland-style democracy. Not only do Googlers have to appraise their bosses, each employee has to nominate five peers to review his or her performance. Not just that, if an employee feels that a fellow-Googler has gone out of his or her way or as one put it, "above and beyond the call of duty", that person can be nominated for a special bonus.

Then, there is Google's famous 70/20/10 rule. This asks its people to spend 70 per cent of work-time on developing Google's core products, one-fifth of the time on products adjacent to the core product— a process through which Gmail, Google Maps, Chrome and Android came about— and the remaining 10 per cent on projects that might have nothing to do with Google.

In India, a product that allows typing in English to get Indian language text is among the top tools that came from an engineer's 20 per cent time. "Innovation is a term everyone uses, but I feel we have codified it. Google's focus is on bottoms-up driven innovation," says Rahul Roy Chowdhury, a Bangalorebased Google product manager who in 2007 seeded the idea of the Indic Transliteration tool, which can now be used for Arabic, Persian, Serbian, Greek and Russian text.

At the Gurgaon office of Google, there is another "Google 20" phenomenon in reference to recent recruits gaining up to 20 pounds, or about 8 kg, in the few months of joining. Blame it on catered lunches with frequent menu changes, freezers full of icecream that anyone can reach out for, cabinets brimming with cold and energy drinks, an in-house coffee outlet and even a person serving fresh coconut water.

The focus on smartly doing business, still, is never lost on all such indulgence. As one Googler says, "When you have the best, you are (looked after) well. But it is the work that is fun above everything else."