The career of each of TCS' 1.25 lakh employees is monitored closely to ensure job rotation, exposure and development of skills. Phew!

A lakh and twenty five thousand people (15,000 more if you count the subsidiaries) from 78 different nationalities in 50 different countries could be a nightmare for the human resources department of any company. Or consider just TCS' largest software development centre, in Chennai, the workplace for 30,000 people; that is equal to the seating capacity of the Lords cricket ground in London. That is one reason why the HR processes are highly digitised (a software tracks every employee, his training needs and development levels and alerts his supervisors on changes needed) at one of India's largest employers—probably the largest if one leaves out public sector behemoths like the Railways or Coal India. 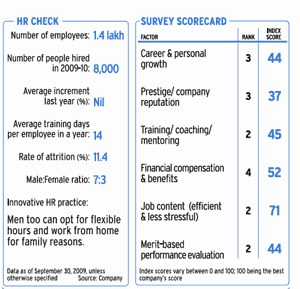 Click here to Enlarge
Ajoyendra Mukherjee, Head of Global Human Resources at TCS, says that without a digitised system, it would be impossible to manage the careers of so many people. Every individual career is carefully managed in the company, ensuring job rotation, exposure and development of skills. Says Mukherjee: "At the junior level we rotate them between functions and then when they have gained some experience we allow them to specialise in some areas. We make sure that all employees are able to challenge themselves." The company has a very young workforce, with an average age of 28. The attrition rate is a modest 11.4 per cent, which is good for this industry, where the norm is 27 per cent.

But for how many years on an average does an individual work at TCS; and what are the opportunities for growth? Remember, in a difficult year (2008-09) the company had added 48,000 people (in the first six months of the current fiscal it hired another 8,000). Such aggressive hiring has to be resorted to not just to fuel the company's growth but also to replace those leaving (in 2008-09 some 16,000 employees had left).

While there is no ready answer to the question on how many years on an average an employee spends at the IT services major, Mukherjee loves to point to some notable names who have grown through the ranks. These include Vice Chairman S. Ramadorai, Managing Director N. Chandrasekharan and Mukherjee himself; all had joined the company as trainees.

Thirty-five-year-old Naveen Sodhiya, a group leader for TCS in the industry solutions team, would have similar aspirations. He has been with the company for 12 and a half years, and TCS was his first employer after he completed his masters degree from Delhi College of Engineering. "I do not find a need to move anywhere as I see all my career goals can be met in this company," he says. Sodhiya had a four-year stint in the US and was trained at Kolkata. Currently, he is posted at Mumbai. TCS has two guiding principles in developing its HR policy. One is to create joy for all the stakeholders and, hence, for employees too.

The second is respect for the individual which, Mukherjee stresses, sets TCS apart from other companies. This is also the principle that drives the company to train employees on cultural diversity. People are trained about different cultures not only when preparing for a foreign posting but even otherwise, as they have to work together with colleagues in foreign countries.

"For example, before employees start interacting with their Chinese counterparts in TCS China over phone, we train them on the cultural aspects of the interaction; what is acceptable in China and what must be avoided," he says. TCS has built software development centres, or delivery centres, in a big way in South America, apart from in India, Hungary and in China. The company is present in Brazil, Argentina, Colombia, Chile and Uruguay.

Interestingly, while Infosys has scored higher than TCS in the overall rankings, TCS comes out on top when the survey moves to only employees of the IT industry. This means that although Infosys looks a more inviting place to a layman, the IT industry pro would prefer to work for TCS. Mukherjee would settle for that.