Redevelopment projects involved single buildings or small housing societies. Since this required taking up many projects to achieve economies of scale, big players were not interested. But a lack of land, rising property prices, and the success of smaller builders has prompted big developers to look at the segment seriously.

Rustomjee Director Chandresh Mehta (left) with Vishwas and Nina Patil at their residence in Borivali, Mumbai. Rustomjee is redeveloping the apartment block, built in 1964, where the Patils and 145 other families live. <em>Photo: Nishikant Gamre</em>
Sarika Malhotra
On the evening of July 26, 2005, when torrential rains poured three feet of water on Mumbai, bringing the city to a standstill, an elderly couple in suburban Bandra struggled to scoop out water from their ground-floor flat. The flat was flooded with water, recalls Shashi Bhushan Bajpai, 82, today sitting with his 80-year-old wife, Saroj. After the water receded, the couple had to repair all rooms, fix electrical wiring and even change the furniture. "In short, we had to rebuild our home," says Bajpai. "But there was a bigger fear looming - what if it happens again?"

The fear was not unfounded. Built in the 1960s, the housing complex where the Bajpais and 79 other families lived was in a dilapidated condition. The floods made it worse. It was then that the residents decided to redevelop the complex. Their representatives met with officials of the Maharashtra Housing Area Development Authority to understand the process of redevelopment. They invited bids from builders to reconstruct the flats. Three builders were short-listed for negotiations. Finally, Happy Homes was selected for the project in July 2008. The owners vacated their flats the following month. By early 2011, they were back in the complex now called The Jade Gardens.

Redevelopment work in the city first generated interest in 1991 when the Maharashtra government framed regulations for the segment. But there were few projects for the first few years as house owners lacked clarity about the rules and as developers felt there was little incentive to undertake such work. The segment attracted more interest from developers after 1999 when they were allowed to construct additional flats in a given area and sell them at market prices. While only small developers took up such projects in the beginning, the market has gained traction over the past couple of years as big builders started making such projects an integral part of their portfolio.

The House of Hiranandani announced its first redevelopment project, in Chembur, in January this year. The Vijay Raheja Group has finalised three projects since July 2012 and has five projects in the pipeline. Godrej Properties entered the segment in 2012 with four projects. It will do a mix of direct deals with housing societies and also act as a development manager for redevelopment projects. "Ours is a very asset-light model. We prefer joint ventures and partner with land owners," says CEO and MD Pirojsha Godrej. "Redevelopment will be a big part of our overall strategy in Mumbai."

Oberoi Realty is also looking to enter the market. "We believe that we will do well," says Chairman Vikas Oberoi. "Redevelopment is about a good brand name. People will trust a good developer to come and build their homes."

Why are big developers showing interest in the segment? Initially, redevelopment projects involved single buildings or small housing societies. Since this required taking up many projects to achieve economies of scale, big players were not interested. But a lack of land, rising property prices, and the success of smaller builders has prompted big developers to look at the segment seriously. 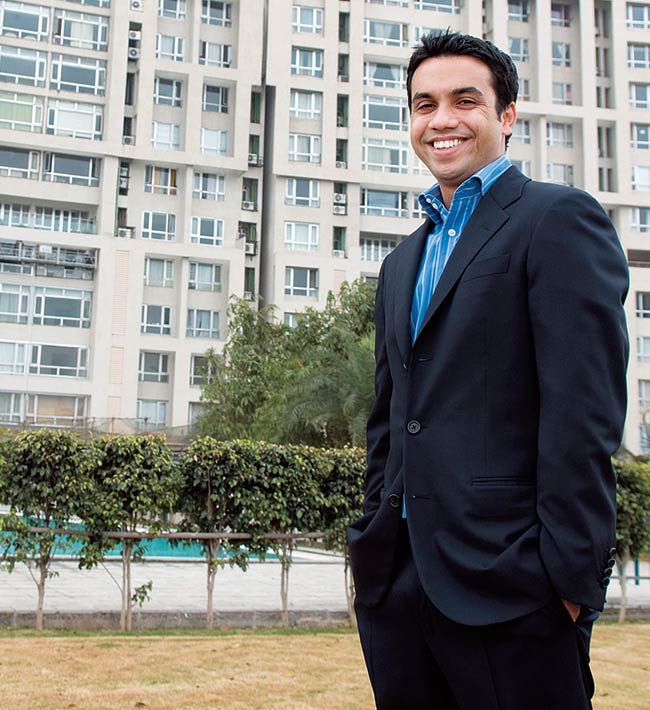 Redevelopment will be a big part of our overall strategy in Mumbai: Pirojsha Godrej
"Redevelopment enables access to land in prime markets without huge upfront investment," says Anubhav Aggarwal, Managing Director of RNA Corp, which has executed 75 projects so far. The developers' main expense when they start a project is compensation to homeowners for relocating during the construction period. This amount is sometimes as high as Rs 1 crore per family, depending on the size of the apartment, locality, and time taken for construction. The sale of additional flats at market prices helps the builders earn a profit on their investment.

Happy Homes, for instance, was allowed to sell 80 flats at market prices in its Jade Gardens project. Oberoi says redevelopment is the only option to boost supply and control prices in a city facing a severe housing shortage. According to industry estimates, the Mumbai Metropolitan Region, which also includes satellite towns such as Thane, needs between 400,000 and 450,000 more residential units. Industry executives say this shortage can be partly met if the estimated 19,000 dilapidated buildings in southern and central Mumbai and 5,000 buildings in the suburbs are rebuilt with additional flats.

Sanjay Dutt, Executive Managing Director for South Asia at real estate consultancy Cushman & Wakefield, says the total area in the island city of Mumbai - from Colaba to Mahim - is about 7,000 acres but a large part cannot be developed because of factors such as restrictive coastal area regulations. Port authorities, textile mills and slums such as Dharavi together control about 2,500 acres, while the remaining land is owned privately and by government bodies. Redevelopment is important as new land within city limits is not available, he says.

"We will maintain 10 to 20 per cent of our portfolio in redevelopment," says Gopalan. "The portfolio has to have a fine balance of cash generating and revenue generating products. Real growth in the top and bottom line will come from greenfield projects." Redevelopment enables access to land in prime markets without huge upfront investment: Anubhav Aggarwal Photo: Nishikant Gamre
Like the real estate industry in general, there are problems aplenty in this segment as well. There are numerous instances of homeowners going to court against builders over issues ranging from missed deadlines to poor construction quality. A lack of clarity in government regulations has made matters even more difficult. That has deterred some prominent developers such as Tata Housing from entering the market.

"It looks very rosy from the outside but the pitfalls are many," says Pujit Aggarwal, Managing Director and CEO of Orbit Corp. He says the company, in its initial projects, gave an option to occupants to exit after taking compensation or stay on in the reconstructed flats. But the difficulties in negotiating with owners prompted it to change its business model. Orbit now prefers to acquire properties from owners, he says.

RNA's Aggarwal explains the problems builders face with an example. The company was executing a project in Subash Nagar locality near Chembur. The project comprised 55 buildings spread over 40 acres.

Aggarwal says the company had to negotiate with housing societies of each building and get consent of more than 70 per cent tenants in each building to qualify. Dinesh J. Kuwadia, the founder chairman of Happy Homes, agrees. "Convincing homeowners is a difficult task as it's about their homes and what they want them to be."

Chandresh Mehta, Director at Rustomjee, says owners are increasingly bargaining for higher built-up area in new flats and more facilities in their housing complex from developers. This is leading to some companies staying away from the market. One of them is Omkar Realtors, which focuses on slum rehabilitation projects where the new flats the dwellers get are of the same size.

"In society redevelopment projects, owners can be tempted with what more they can get from their piece of land," says Mehta.

Despite the problems, the redevelopment market is growing and attracting more players. It is also generating interest among private-equity firms (see PE's Playground). Another evidence of the market maturing is the entry of several project management consultants since 2009 to advise homeowners. Dhargalkar Technoesis, Nandapurkar & Associates, Dilip Sanghvi Consultants, and S.P. Consulting Engineers are some leading names in the field.

Will the entry of big players lead to consolidation? No, says Lalit Kumar Jain, Chairman and Managing Director of Kumar Urban Development. The company has undertaken 50 redevelopment projects since entering the market in 2005.

"Redevelopment cannot be a mass activity and each developer will have limitations," says Jain. "This business cannot have market leadership. It will remain fragmented."