Companies are taking more women on board, often from promoter family

Nita Ambani, wife of Reliance Industries Chairman Mukesh Ambani, joined the company's board as a director on May 16, 2014. PHOTO: Reuters
Tina Edwin

When Reliance Industries announced on May 16 it had inducted Nita Ambani, wife of RIL Chairman Mukesh Ambani, as a director, there was much consternation. The decision was denounced as a bad corporate governance practice. The common refrain was that RIL could have invited any seasoned woman professional to join the board.

This was not the first time Nita Ambani was appointed to a board. She has been an RIL nominee on the board of EIH Ltd, the company that owns and manages Oberoi Hotels, since October 2011. Reliance is invested in EIH. 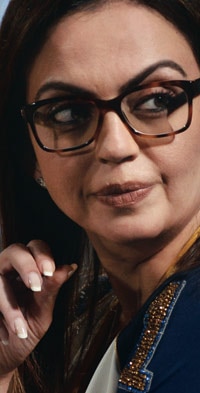 Relying on family: Nita Ambani, wife of Reliance Industries Chairman Mukesh Ambani, was recently inducted into the company's board.
But Ambani has to prove she has earned the two board positions, and that she is not there only because she is the wife of the country's richest man.

Ambani's appointment is not unique. Since regulatory changes came into effect - a new Companies Act and amended Clause 49 of the Securities and Exchange Board of India's Listing Agreement - stipulating appointment of women to boards of companies, many promoter-run firms have inducted female family members as directors.

All listed companies and all public companies with paid up share capital of at least Rs 100 crore or turnover of  Rs 300 crore are required to have a woman director. And so, wives, daughters and daughters-in-law of promoters find they have a new calling card.

It is not unusual for promoters to appoint female family members to the boards to meet the legal stipulation and to keep control within the family. It goes back to the era when no one spoke about corporate governance or protecting the interest of minority shareholders. It did not matter whether family members attended board meetings. On paper, their presence was marked. However, the rules of the game have changed now with stricter regulations and emphasis on good corporate governance practices.

COLUMN | Who cares why? Here's our chance

Data compiled by indianboards.com, a joint initiative of PRIME Database and the National Stock Exchange, show about 175 women from promoter groups are on boards as executive directors and about 100 as non-executive directors. These include women who set up their own businesses as well as younger generation of well-qualified women who have executive as well as board roles.

"If sons can be inducted on boards, why shouldn't qualified wives and daughters be? Why should they be deprived of board positions?" asks Pallavi Shroff, Senior Partner at law firm Amarchand Mangaldas and board member of four companies. Many women directors are well-educated and capable individuals, she adds.

About 35 per cent women directors from promoter groups are engineers, doctors, lawyers or postgraduates and another 45 per cent are graduates, according to the data compiled by indianboards.com.

Manisha Girotra, CEO of investment bank Moelis & Company India and a director of a couple of companies, says diversity on boards is important. "Even if a woman gets inducted on the board for the wrong reason, she must do a good job," she says. "If you are frivolous in the boardroom, you do disservice to your position."

Illustration by Raj Verma.
Legislating board positions for women was first initiated when a bill to amend the Companies Act was introduced in the Rajya Sabha in 2003. That bill contained several proposals that India Inc found unacceptable and had to be eventually withdrawn. Vinod Dhall, who was the secretary to the corporate affairs ministry at the time, says the intent of the proposal was to increase the presence of women on the boards of companies. "We felt that the proposal would promote gender diversity and that women could bring greater sensitivity in addressing certain types of issues in board deliberations. I believe this is a progressive measure," he adds.

Not many promoters are used to having women in their boardrooms, and so resistance has been high. Some say meritorious women would anyway find their way to the boards, and that they do not need crutches to get there. But even in advanced countries, where women form a large part of the workforce, they remain under-represented on boards until legislation makes induction of women directors compulsory. According to Women on Boards, a study by Biz Divas and Khaitan and Co, a fifth of world's 200 largest companies still do not have a woman on their boards. In India, about 850 NSE-listed companies have all-men boards, indianboards.com estimates.

PUNCHING ABOVE THEIR WEIGHT

Haigreve Khaitan, Managing Partner at law firm Khaitan and Co, admits he was initially apprehensive about how the legislation requiring appointment of women on boards would play out. He finds those concerns misplaced now. "Women have brought fresh perspective into the boardrooms. They have made boards more open with the questions they ask," he says.

Khaitan finds women come better prepared for meetings than male directors and are not embarrassed to ask questions. "Their questions are very sensible and logical."

Priya Chetty Rajagopal, Executive Director, Leadership and Board Practice at executive search firm RGF and who is also on the boards of a few companies, concurs. "Women don't want to wing it," she says. She felt that professionals like her join boards where they feel they can contribute to the growth of the company and also enhance their learning.

What also helps is that glass ceilings largely disappear in boardrooms. "Being on boards make women feel liberated to ask difficult questions and raise uncomfortable issues, which they may not even in top executive positions," says Padmaja Alaganandan, Executive Director, People and Change Consulting at PwC India. "Questions on how this may impact future career progression etc become irrelevant."

While women want to be on boards, and are accepting challenging roles, most women directors find it distasteful when calls come more because of their gender and less because of their achievements, adds Alaganandan.

But that is how it is. "Clients send out briefs, sometimes a single line, asking us to find women directors," says Radhika Vivek, Executive Director at Sheffield Haworth, an executive search firm. With the September-end deadline for listed companies fast approaching, many are scrambling to find a woman director. No search firm would want to place just any woman on any board; it would be disastrous for the board and the woman if they don't complement each other. "We ask companies to identify gaps in the board that an independent director can fill and then proceed to find a candidate who fits that profile," she adds. The idea is to bring on board a woman director who also has deep experience and hence can add value in specific areas.

Appointing women on boards not only brings diversity to board composition but also makes corporate decisions more sensitive and inclusive. "Women bring more world into the boardroom and they bring heart into decision," sums up Rajagopal.