Reliance Industries - The virtues of integration

With gas production and a global-scale refinery expected to come on stream in 2008, Reliance Industries is back to doing to what it does best: Creating value by creating world-class assets.

Mukesh Ambani
The ongoing year will be a defining one for Mukesh Ambani. For two big reasons. Before 2008 ends, the 50-year-old Chairman of Reliance Industries Ltd (RIL) would have commissioned its 27 million tonne export-oriented refinery at Jamnagar.

A new company, Reliance Petroleum Ltd (RPL), was floated for this purpose in 2006. The refinery, which has called for an investment of Rs 27,000 crore (almost half of what a refinery of similar capacity and complexity would call for in this day and age) is, in true Ambani style, set to break many records. It’s set to be completed in 33 months (as against 55-56 months that it would take for most others); its refining margins are tipped to be higher than prevailing norms (at least, $2-3 higher than the standard Singapore refining margins); and, together with RIL’s existing 33 million tonne refinery, Jamnagar would become the largest refinery location in the world, turning out 1.25 million barrels of fuels per day.

Then there’s the upstream business of gas where, last fortnight, RIL made yet another commercial discovery in the NEC-Mahanadi offshore basin (its eighth in a particular block in that basin). Reliance has been active in four exploration basins in India that are rich in hydrocarbons— Krishna-Godavari, Mahanadi, Saurashtra and Cauvery.

As Ambani said at the company’s last annual general meeting last October: “Reliance has invested over $2 billion and is committed to investing about $4 billion of risk capital in the coming years to realise the hydrocarbon potential of India.” Analysts have already sensed the mouth-watering prospect of this business, crediting a little over a third of the current value of the RIL stock to the exploration & production (E&P) business. Hital Meswani, Executive Director, RIL, says gas production all over the country—where RIL has so far made 40 discoveries—is the other big bang expected from the group this year. Analysts expect operating cash flows of roughly Rs 17,000 crore from the E&P business in three years. Says Jigar Shah, Senior Vice President & Head (Research), Kim Eng Securities (India): “The KG basin has the potential to meet 50 per cent of India’s gas requirements.”Clearly, refining and E&P are expected to alter the already huge dimensions of the Rs 1,18,000-crore Reliance Group in the years to come. Refining (including both units at Jamnagar) is set to emerge the biggest business and oil & gas production the most profitable. As one company official puts it: “Refining will bolster the topline, and gas the bottom line.”

If the Reliance growth engine is still humming, it’s thanks to Ambani’s penchant for executing worldclass, world-scale projects in record time and at costs that are significantly lower than those of their peers in similar businesses. “Our core competence has been in the execution of large capital-intensive projects. This is something we have proved time and again,” points out Meswani. Take for instance, the first refinery that came up at Jamnagar in 1999. The project, in Meswani’s words, was executed at a blistering pace. From a deadline of 55-60 months for the project to be completed, the refinery was ready in a little under 36 months. 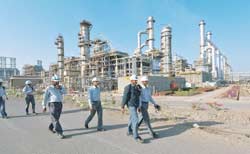 The Reliance refinery at Jamnagar
What puts Reliance in a sweeter spot is the global shortage of refining capacity these days, thanks to the huge appetite for fossil fuels from China, India and West Asia. That there are virtually no new refineries expected to come on stream this year—thanks to soaring raw material costs—also puts Ambani in clover. What’s more, the experience of already building a refinery works to Reliance’s advantage. Yet, as Meswani puts it, the new refinery is an “intelligent repeat” rather than an “absolute repeat”.

For instance, the new refinery has a structural advantage in the sense that it can be flexible when processing crude, accordingly adjusting to market conditions (if more gasoline is needed than diesel, it can swiftly make that change). Also, the new refinery has a process unit known as an alkalation plant—the world’s largest—which will allow RPL to supply gasoline to the most environmentally-stringent global markets. And finally the export-oriented unit will have the ability to process heavier crude, which means the company can pocket heavier margins.

The one link in the Reliance story that has not gone according to script has been the marketing side of the oil business. RIL has so far rolled out 1,700 petrol pumps (of the over 5,000 planned). No more pumps will be put up as the business is unviable as things stand today. “This is on account of a lack of a level playing field where the public sector undertakings get subsidies and there is no such advantage to the private sector.

Unless the government corrects this policy, it is not likely to be a viable business,” explains Meswani. As far as capacities go, and exports (of Rs 60,000 crore in 2006-07), RIL easily stacks up as a global player. But one major shift—from creating largescale domestic assets organically—is the move to pick up businesses overseas. 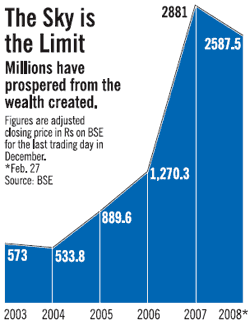 The acquisition of a majority stake in Gulf Africa Petroleum Corporation (GAPCO) in Africa was a step in that direction. GAPCO has a significant presence in the petroleum downstream sector in Tanzania, Uganda, Rwanda and Kenya. “The acquisition signals the readiness of Reliance to leverage its manufacturing and marketing skills to build positions in the global refining business,” Ambani had said immediately after this purchase. Even in the E&P business, Reliance has been awarded eight blocks covering an area of 85,000 sq. km across Yemen, Oman, Columbia, East Timor and Australia. All this is a clear indication of a changing mindset—something that Ambani spoke of earlier. “Traditionally, Reliance has grown by building businesses from scratch. This strategy cannot entirely drive growth in an era of intensive global competitiveness, rapid technological change and limited windows of market opportunities. Reliance is, therefore, pursuing an acquisition mode of growth,” he said. According to Meswani, the emphasis has been to have a thought process that is global. “For instance, RPL will export to countries across the globe. That itself will make the business global,” he adds.

With the traditional businesses like polyester and petrochemicals looking good, the overall picture for RIL appears bright. The latest foray has been retail, which cuts across formats like fruits and vegetables, consumer durables and lifestyle, among others.

The retail project has an outlay of a massive Rs 25,000 crore spread across India. The proposed projects for special economic zones could well be another big story. And Ambani is thinking long term, already looking at a future beyond fossil fuels. Meswani lets on that a project for alternative fuels is being blueprinted in group company Reliance Life Sciences. The visionary that was Dhirubhai would have approved.