Nisa, daughter of Adi Godrej, Chairman of the Godrej Group, would rather be known just by her first name as she helps transform the 113-year-old company. 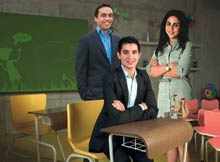 Navroze (sitting), Pirojsha and Nisa
Nisaba 'Nisa' Godrej has everything a 31-year-old could ask for — born with a silver spoon in her mouth, distinguished parents, an extended family educated in Ivy League colleges, an undergrad degree from Wharton and an MBA from Harvard — and of course the Godrej name, one of India's most trusted and oldest brands. But Nisa, daughter of Adi Godrej, Chairman of the Godrej Group, would rather be known just by her first name as she helps transform the 113-year-old company. She started at the group a decade ago as a management trainee at Godrej Sara Lee, assisting the group chairman, working in corporate human resources, projects in Indonesia and then with a start-up, Godrej Tea.Today, Nisa leads a group-wide portfolio strategy initiative and has helped set up a strategy cell. Nisa recalls how a professor at Wharton had told her he would fail her if he found her working for a bureaucratic organisation. "He explained to me why he said that. He hated the word 'bureaucratic' and said: 'Never use that word ever again …instead I want you to tell me how you are going to make your first 100 million dollars'".

Those words helped her when it came to transforming the Rs 10,000-crore Godrej Group. So what is GenNext bringing to the family business? "I think we bring with us our inexperience and with inexperience comes a certain amount of courage to prove ourselves in whatever we are doing," she says frankly.

Vivek Ghambir, Chief Strategy Officer, Godrej Industries, says: "She is inspirational and a visionary in her ideas and thought. She has been the key architect of our 'brighter living' vision."

One of Nisa's biggest learnings: the importance of patience. "I used to send out these long notes initially when I had joined the business on how to change things and expected these changes to happen overnight. But I have learnt it does not work that way," Nisa explains.

Pirojsha Godrej is interested in politics and that probably explains why he did his Master's in International Affairs and interned at Hilary Clinton's Office and with the Ministry of External Affairs in India. But now Pirojsha is immersed in the family business, heading Godrej Properties as Executive Director.

After returning from the US in 2004, he did a one-year stint in Godrej as a management trainee. Then he joined Godrej Properties and Investments as a manager. So far, his career growth has depended on his performance— just as it is for other freshers. Why did he choose the real estate business? "When I came back from the US, the Indian economy was growing and there were a lot of opportunities … the real estate industry had also opened up," he recalls.

Pirojsha is focussing on building his leadership abilities and is blunt about his shortcomings: "I can be very impatient so there is a need to find the right balance while at work. Also finding the right balance in detail orientation is important and I am not good at this."

He feels his generation brings newer ideas and a fresh perspective to the business and has a global vision for the group.

For Navroze Godrej, son of Jamshyd Godrej, Chairman of Godrej and Boyce, joining the family business was never a given. "We had the freedom to choose our career paths. But after having spent seven years abroad I wanted to come to India and the obvious thing was to work with the family," says the soft spoken Navroze. He was inducted into the Rs 4,300 crore Godrej and Boyce after completing his studies in the US in 2005. In between, Navroze did a summer internship with the French crystal maker Baccarat.

"The insights I got from all that travelling was that we really needed to do something with our brand. Our image was no longer as bright as it used to be. … One was that we had to reposition our brand, but more importantly, our products needed a revamp and reinvention. So I got into focussing on designing and innovation," explains Navroze.

"Impatience" he says is his shortcoming as he wants everything to happen fast. But he says he is learning slowly and steadily to give things more time.