Small Steps To A Big Gain

The government and other lenders, including fintech firms, need to be more aggressive in MSME lending

Auto parts maker Emdet Group, founded in 1959 by late Dev Mitter, had a 28-year-long relationship with Oriental Bank of Commerce. But his grandson, and Executive Director of the company, Nishchay Mitter, switched to a private bank. "Despite a consistent track record of timely payments and maintaining healthy balance sheet, OBC kept charging 12 per cent interest rate even on incremental loans, not to mention the long turnaround time and 110 per cent collateral on the credit amount. So, I went to Axis Bank, which offered me 8.9 per cent interest rate," he says. However, for working capital needs, Mitter reached out to LivFin, a supply chain and invoice financier. "Interest rates are no doubt higher, but they disburse the loan in 72 hours." Mitter never considered government loan initiatives given his experience with OBC.

Dimple Sachdev, owner of leather products company Drishti Lifestyle, explores all schemes that the government launches. She, in fact, attended the launch of the 59-minute loan in November 2018. The portal is an online marketplace where micro, small and medium enterprises (MSMEs) can get in-principle approval for loans up to Rs 5 crore (Budget 2019 extended this from Rs 1 crore) in less than 60 minutes. Sachdev has a current account with Central Bank of India (CBI), but when she applied for a loan from the portal, her request got rejected because she already had a running loan with CBI. "I don't know anybody in my industry or otherwise who has taken advantage of the 59-minute loan portal," she says.

Many applications that got in-principle approvals online were rejected by banks as the lenders wanted collateral even though the scheme is linked with the Credit Guarantee Fund Trust Scheme for Micro & Small Enterprises (CGTMSE) under which MSMEs are eligible for collateral-free loans up to Rs 1 crore.

The government is aware of this. Pankaj Jain, Additional Secretary, Department of Financial Services, Ministry of Finance, says, "MSMEs must maintain relationship with only one bank. You can't have your business account in one and seek loan from another." On collateral demand, he says, "RBI guidelines mandate that banks shall not insist on collateral for loans below Rs 10 lakh. Taking collateral for loans beyond Rs 10 lakh is the bank's commercial call."

As switching banks is tedious, and often existing banks do not issue no-objection certificates, businesses are not able to raise funds at competitive rates. Although the government has offered interest subvention of 2 per cent for GST-registered MSMEs, among the about 63 million MSMEs in India, only eight million have registered themselves for GST.

MSMEs in India have two options for borrowing: either go to a bank or the government or to a fintech firm. So, while Jain may say that the 59-minute loan portal is giving tough competition to fintech players by reducing the turnaround from 30 days to six-seven days, lack of proper documentation is pushing MSMEs towards fintech firms, which anyway are a better alternative to options such as moneylenders and chit funds.

"When I started out, I used my own savings, and borrowed from friends and family. Now I have taken a loan from InCred (a fintech firm) for my working capital needs. I never considered government schemes as I thought the process would be difficult," says Mohit Sagar, Director, Zentrum Technologies, a security service provider founded in 2009. Bhupendra Kumar, Founder, Aeiforia Construction, an office and residence management company, was "shown the door" by banks when he wanted to start his business in 2011. He had to tap his own funding sources to start off. Recently, he visited the Singapore fintech festival and has made up his mind to approach the fintech players.

Sachdev of Drishti Lifestyles and Kumar of Aeiforia have also joined platforms such as GlobalLinker that facilitate funding for small businesses and provide a network to grow their businesses, win contracts and digitise operations.

One of the tools that fintech players have used to their advantage is newer ways of credit assessment such as data analytics, which helps them disburse collateral-free loans. Most of them track non-traditional data points such as customer reviews, product margins, trade payments, utility payments, social media presence, geographical location and vendor relationships. Some cater to unbanked businesses, creating credit history in the process.

Gurgaon-based Indifi, for example, focusses on select sectors such as travel agencies, retailers, kirana stores, restaurants, small hotels and truck operators, so that nuanced credit check measures can be used. "Each industry has its own risks. If we specialise in a few industries, we can measure those risks better," says Alok Mittal, Co-founder and CEO of Indifi.

Aye Finance has adopted a cluster-based approach for underwriting. Most of its clients have turnover of Rs 10-20 lakh and are exempt from paying corporate tax and GST filings. "In a cluster of, say, shoe sellers, we check records of sales and how much they pay to their workers. Since we are aware of the average sales and margins in the shoe business, we can calculate the net margins. This is how we validate business through visible financial and operational metrics," says Sanjay Sharma, Co-founder of Aye Finance.

Most fintech firms disburse loans faster than banks as they have newer credit assessment methods. But they have failed to garner volumes. Industry estimates suggest that the fintech players' total loan outstanding to the MSME segment is just Rs 39,000 crore as against Rs 18.64 lakh crore in case of banks and Rs 6.5 lakh crore in case of non-banking finance companies (NBFCs).

Banks and fintech firms may be competitors but there is enough scope for joint effort too when it comes to tapping MSMEs. Himanish Chaudhuri, Partner, Deloitte India, says banks and fintech players should not compete with each other but work together; and one way to do that is through 'co-origination' of loans: two or more lenders lending to the same borrower. Jain of the Department of Financial Services also sees merit in co-origination of loans with banks.

The RBI had announced the guidelines for the co-origination model in September 2018, but it is yet to take off in a big way. Private sector banks have started warming up to it, but not public sector banks. Harjeet Toor, Head-Retail, Inclusion and Rural Business, RBL Bank, says they co-lend with fintech NBFCs in a ratio of 80:20 or 70:30 and bear full risk in non-NBFC fintech tie-ups. "Our co-lending model is yet to reach scale, though." 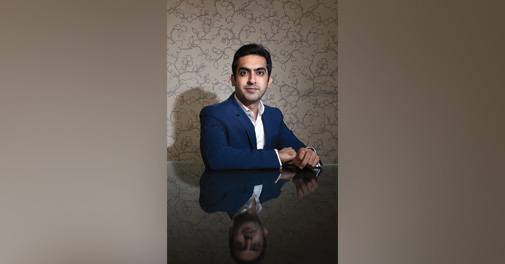 Rachit Chawla, the CEO of Delhi-based fintech firm Finway, says the co-origination model can help them scale up. "We lend about Rs 2.5 crore each month. If we co-lend in the ratio of 20:80, our loan book can increase four-five times," he adds.

The fintechs' presence may be on the rise but banks are still the primary source of MSME funding. But banks need to improve their credit assessment measures and take a focussed approach to building expertise. "Banks lend across sectors, although they lack domain knowledge of the sectors, products and geographies essential for evaluation and risk analysis of MSME projects. This needs to be worked upon," says Anil Bhardwaj, Secretary General of the Federation of Indian Micro Small & Medium Enterprises (FISME).

Another area that needs work is the rules, rather the lack thereof, under the Insolvency and Bankruptcy Code (IBC) for proprietorships and partnership firms. MSMEs fare better than defaulting promoters of large companies as they can bid for their companies or assets under the IBC. But they have not been able to take full advantage of the IBC as many rules have not been finalised. "Finalisation of these rules can boost lender confidence because lenders will have more certainty and predictability regarding recovery of defaulted loans," states the June 2019 report by the RBI committee headed by former Sebi Chairman U.K. Sinha.

The committee also recommended changing the definition of MSME - from one based on initial investment in plant and machinery as per the MSMED Act, 2006, to turnover-based classification.

Non-fund based credit guarantee is another area that needs attention. When MSMEs receive a contract, they have to provide bank guarantee to clients. For this, they have to provide collateral worth 110-115 per cent of the loan value to banks. For firms already grappling with working capital challenges, this is an additional burden. "Globally, insurance companies take care of this requirement. The government should look into replacing the collateral-backed bank guarantee with insurance premium," suggests Bhardwaj of FISME.

The Union Budget 2019 talked about creating a payment platform for MSMEs to solve the problem of delayed government payments. The platform would enable online bill filing and payments to eliminate delays. But this is yet to be implemented.

Fintech lenders have their own share of problems. The biggest is lack of funding that prevents them from scaling up. Most have only been raising global capital due to liquidity crunch in India after banks tightened their credit standards in the wake of a series of defaults by some NBFCs. "We don't need capital for operational expenditure but to grow our loan books. If the government supports us with funding, it'll be a win-win. We'll get funds and government money will be safe because our credit check measures are strong. Ultimately, credit-deprived MSMEs will get the benefit," says Chawla of Finway.

Taking into cognizance the ongoing liquidity crisis, in its August monetary policy, the central bank permitted banks to on-lend through NBFCs for micro and small enterprises up to Rs 20 lakh. The move will ease money flow to the segment.

Bhardwaj suggests establishing an IDBI 2.0 (in its co-operative bank avatar) and state finance institutions to fund greenfield projects. "The Ministry of Finance and the RBI should start consultations with stakeholders, including multi-lateral agencies, to re-invent institutions like cluster-based co-operative banks and state finance corporations."

The MSME segment is facing a credit gap of Rs 20-25 lakh crore. The liquidity crunch after the NBFC crisis and a slowdown in the economy have made things tougher. So, while fintech players can see the opportunity in MSME lending, they can participate only in a limited way. Therefore, it is the government and the banks that will have to take calculated risks, bridge the trust deficit with MSMEs and bring in fintechs to support the country's small businesses.