A glut has kept sugar prices low. The resulting arrears to farmers have become a headache for the government in an election year. Can it fix the problem?

The nip in the air and the hazy skyline in October are tell-tale signs of onset of winter in northern parts of the country. In India's most populous state, Uttar Pradesh, there is one more giveaway - long queues of tractors on highways overloaded with the perennial sturdy grass, sugarcane. Around this time of the year, this is a common spectacle in two other big states - Maharashtra and Karnataka - as well. The three states, between themselves, produce almost 80 per cent of sugarcane grown in India. The crop's popularity with farmers has made India the world's second-largest sugar producer after Brazil.

However, the farmers are unhappy. In the last two years, India has been producing far more sugar than it consumes. A glut in global markets means exporting excess production is not easy. The 50 million farmers who grow sugarcane in the country are facing the brunt of this. As of December 31, 2018, mills owed sugar farmers close to Rs 12,000 crore. They say they are unable to pay as sugar prices have crashed while their costs have not (mills cannot by law refuse to buy sugarcane brought by farmers; the price, too, is fixed by governments).

The situation is worrisome, and despite being traditionally lucrative, sugarcane has added to the prevalent narrative of agrarian distress in the country. On January 10, hundreds of farmers from the cane-growing belt of Western Uttar Pradesh blocked the Delhi-Dehradun national highway for hours demanding, among other things, quick payment of sugarcane arrears. Gathered under the banner of the Bharatiya Kisan Union, they had also agitated in September last year by marching from Haridwar to Delhi, but were stopped at the Delhi-UP border. There have been multiple agitations across states over this in the last 12 months - farmers have marched to Parliament at least thrice, while the All-India Kisan Sabha organised the Kisan Long March, in which approximately 35,000 farmers marched from Nasik to Mumbai to gherao the Maharashtra Vidhan Sabha, in March 2018.

The anger among farmers has added to the headache of the Union government. There is a mandatory fair and remunerative price for sugarcane across the country, which ensures that growers do not face the problem of valuation. But low prices of sugar due to overproduction has meant low realisation for sugar companies due to which they are unable to pay farmers on time. As a result, producing sugar is not always a sweet experience. This year, it promises to be particularly bitter for businessmen, farmers and possibly even the politicians. 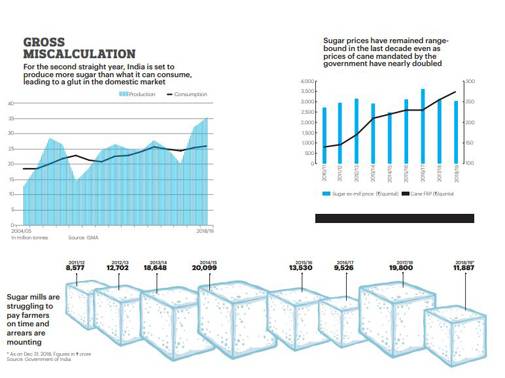 The glut has kept sugar prices under pressure, but cost of production has continued to go up. In order to appease farmers, state governments regularly revise prices of sugarcane - cane prices have on an average gone up by over 9 per cent every year since 2010/11. Price of sugar has, however, risen only 2 per cent a year during the period. This has resulted in lower earnings for sugar companies.

"A structural change is required. There is a mismatch between input cost and output price that makes business unviable," says Abinash Verma, Director General, Indian Sugar Mills Association. "Farmers can't be told not to grow a crop that pays so well. There is an assured buyer and MSP is more effective in this crop than in any other crop. But it is overly controlled. The need is to let the industry be. This year, everybody knew there will be excess production, yet the government went ahead and increased the MSP for sugarcane. On the other hand, the MSP for sugar, at Rs 29 per kg, does not even cover the cost of production."

The impact has been felt on the industry's financial performance. In fiscal 2017/18, the top 10 sugar companies in the country logged a net loss of Rs 1,464 crore as against a net profit of Rs 808 crore in the previous year. Operating margin more than halved from 15 per cent to 6.2 per cent during the period.

"To me, it is the worst time ever for the industry," says Tarun Sawhney, Vice Chairman and Managing Director, Triveni Engineering and Industries. "With more sugar being produced, we have seen a catastrophic fall in prices to levels well below the cost of production. The need is to link cane prices with sugar prices so that the industry makes enough money to pay farmers on time." The problems are not lost on anybody, least of all the government. Throughout last year, it announced a number of packages to alleviate the stress in the sector. The measures included doubling import duty on sugar from 50 per cent to 100 per cent, scrapping export duty, export quota of five million tonnes for this year, fixing the minimum selling price at Rs 29 per kg and increasing production assistance for farmers from Rs 5.5 to Rs 13.88 per quintal.

The government also announced a broad ethanol policy to ensure that a part of the cane produced is used to make ethanol. It increased the price of ethanol produced directly from sugarcane by 25 per cent and promised soft loans of Rs 4,500 crore to mills creating ethanol capacity. A transport and handling subsidy of Rs 1,000 per tonne for mills within 100 km of ports, Rs 2,500 per tonne for mills more than 100 km from ports in coastal states and Rs 3,000 a tonne for mills in states other than coastal states have also been announced. Another package that is expected to expand interest subvention for ethanol production and increase MSP on sugar to around Rs 32.5 to help increase the industry's profitability is also in the offing.

There is, however, no easy fix. For example, the export quota is expected to reduce supply of sugar in the domestic market and shore up prices. But there is a glut in the global market, too; prices there are even lower than in India. Exporting sugar is a loss-making proposition, which explains why last year's export quota of two million tonnes was not used.

"The government has done a great job with ethanol and the policy is futuristic. But ultimately, sugar prices need to be bumped up. The fear that a rise in sugar prices will add to inflation is wrong," says Sawhney. "How much will a household budget be impacted if sugar prices rise Rs 5 per kg? The impact of price fluctuation of other consumables like milk or vegetables is far more."

In the backdrop of the farm distress narrative, the issue of sugarcane arrears is likely to figure prominently in the political discourse in the run-up to the general elections. The timing of the sugar season - crushing ends in most states in May - will add to that. Political parties have already started squabbling over this.

"Just imagine, on one hand the farmer grows sugarcane with his hard work throughout the year, takes it to the sugar mill. But when the farmer asks for remuneration for his hard work, the BJP governments of Uttar Pradesh and Maharashtra do not give Rs 11,000 crore dues to the sugarcane farmer," Congress President Rahul Gandhi said in a Facebook post on January 9.

The issue has put the ruling dispensation on the defensive. It agrees there is a problem. "Sugarcane farmers are in a serious crisis. But this is not a problem created by us. It's a problem caused due to global economy. The sugar produced in Brazil sells for Rs 19 per kg. This is destroying sugarcane farmers and sugar factories," says Nitin Gadkari, Union Minister for Roads and Highways. "I want to request you to not produce sugar. We want you to produce ethanol from 4 per cent molasses. We have given permission for producing ethanol from sugarcane juice and we have increased the rate for that to Rs 58. The ethanol economy is worth Rs 11,000 crore and the prime minister wants farmers of the country to get relief by taking the ethanol economy to Rs 1 lakh crore. The more ethanol you produce, the more the government of India will buy. The price is also good and farmers will benefit from it."

Ethanol, however, is a long-term solution to a problem that needs a short-term fix urgently. In an election year, expect sugar to come with a bitter aftertaste.