News
Magazine
Cover Story
The brand that refused to die

The brand that refused to die

Thums up is possibly India’s most resilient iconic brand. While legions of companies pump large sums of money into their brands in the hope that they attain “icon” status, Thums Up has done so with minimal fanfare. After being shunted aside for years, it is once again the king of Indian colas, reports Shamni Pande.

Thumbs up: Still going strong
Thums up is possibly India’s most resilient iconic brand. While legions of companies pump large sums of money into their brands in the hope that they attain “icon” status, Thums Up has done so with minimal fanfare. Launched by the Chauhan brothers Ramesh and Prakash in order to fill the gap that Coca-Cola left when it exited India in 1977, Thums Up introduced a bold new flavour that Indian customers instantly took to. “We first tried variants that tasted like Pepsi and Coke, then launched our version with an orange base and more fizz,” says Ramesh Chauhan. Apparently, colas have a base fruit flavour in the concentrate. Pepsi and Coke are, according to Chauhan, lemon-based. “In our minds we had an image of a man with an eye-patch. We wanted a different taste that would be the hook and the differentiator for our brand,” he adds.

The stronger, fizzier carbonated beverage has ruled the ruthlessly contested cola category for much of its existence. At first, Thums Up faced-off against local competitors such as Campa Cola, Double Seven, Duke’s McDowell’s Crush and Double Cola, amongst others. When the Chauhans sold Thums Up to Coca-Cola in 1993 upon the cola giant’s reentry, it was forced to share shelf space with both Coke and Pepsi. 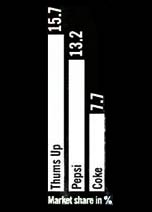 Here’s where the tale gets twisted. Instead of treating its number one brand like a prized stallion—in 1993, when Coke entered India, Thums Up had a 36 per cent market share versus 26 per cent for Pepsi—industry sources say that Coke tried to kill the brand (The company denies this allegation). This case of cola filicide resulted in Coke India ceding ground to Pepsi, as Thums Up’s market share began to take a precipitous dive.

Today, Thums Up is once again King of the cola hill, with a 16 per cent share, and Sprite and Pepsi trailing it with 15 and 13 per cent respectively. So, what explains this remarkable tale of chutzpah and resilience?

Thums Up’s advertising has stayed clever and consistent, for one. In the 1980s, Thums Up ads featured a hummable jingle, Happy Days Are Here Again—innocuous enough, but in reality “this was a coded message that not only announced the availability of cola, after both Pepsi and Coke had exited the country, but also signalled the end of the Emergency,” says brand expert Anand Halve. This was followed by “Taste the Thunder” tagline in the 1990s that is in existence till today.

Coke has been far from consistent in this regard. “I do not know what it’s trying to say,” says Halve. The brand has alternated from its international messages, “Enjoy,” or “Eat, Sleep, Drink,” to ones in Hindi such as Jashn Mana Le, Thanda Matlab Coca-Cola, and Sar Utha Ke Piyo.

Most importantly, Thums Up’s “taste profile has resonated well with the Indian palette. It offers a masculine appeal and its taste becomes biologically coded with this appeal after sometime,” observes Santosh Desai, former Head of McCann Erickson. Still, question is, can Thums Up continue to attract the Gen-Next audience who are so completely familiar with Pepsi and Coke? “I do believe that it will survive and thrive,” says marketing expert Harish Bijoor. Still, Coke’s Sprite has quickly become the No. 2 brand in the country and is within spitting distance of Thums Up. If the brand wants to continue tasting the thunder, it needs a strategy to compete with not just colas, but other flavours in the sparkling category as well.