Sitting in a small room, 250 km from Pune in the heart of rural Maharashtra, farmer Satish Jagtap swears by the daily price and weather updates that he gets from Nokia’s new MajhaNokia service. It saves him time and money. But can he rely on those numbers? “I trust the brand. Nokia is the Hero Honda of mobile phones, reliable. I bought their mobile phone because of this service.”

A thousand kilometres away, Aircel is launching its mobile services in Delhi. Sandip Das, CEO of parent Maxis Cellular, is clear about focus on service. Aircel’s TV promo features Indian cricket captain Mahendra Singh Dhoni using his handset to do deals on Yahoo and MakeMyTrip. Dhoni never puts the handset to his ear. “Offering reliable data services is how we will distinguish ourselves from the pack,” says Das.

Concurs D. Shivakumar, MD, Nokia India, which controls about 65 per cent of the handsets market here. “It does not matter if the service does not make too much money, it helps me put my product in the consumer’s hand.” Across India, the mobile revolution is passé by now and is just a matter of tracking the millions. (By the time you will be reading this, the number of mobile subscribers in India will have crossed 400 million, making it the world’s second-largest market.) But this very growth has put the fear of commoditisation into the hearts of the players. They need a differentiator. That differentiator is services.

Sending an SMS to a special number or downloading callertunes. Accessing e-mail or Googling with your phone. All these are termed services.

Voice will certainly remain the main revenue generator for operators, who are expected to earn a total of Rs 1,50,000 crore in 2008-09. Of this, services or non-voice revenues—SMSes, data subscriptions, caller ring-back tones et al—will fetch “only” around Rs 10,000 crore. Yet, services will be the driver by which handset vendors and operators will try and rise to the top of a very cloudy mixture. 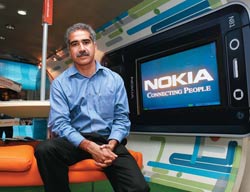 Vineet Taneja
Rural raga, urban pop
Nokia’s MeraNokia (Majha Nokia in Marathi) is actually a Nokia Life Tools (NLT) application coded into the 2300 and 2323 handsets being used in the pilot. Farmers and villagers pay around Rs 2 per day, every 10 days, for the latest on crop pricing, weather, farming tips, among other things. All this is freely available on the net for those with PCs and Internet access. For the farmers, the mobile is the PC.

Jagtap, a cereal farmer with a large landholding, explains that paying Rs 2 a day makes sense for him: “It saves me the hassle of making three, four, five phone calls that cost more, and occasionally even a bus journey. The prices are accurate …. But having health tips would be a nice touch.”

Jawahar Kantilal, Nokia’s Head for Emerging Market Services, is extremely bullish about these services. “The urban population is well represented in services, usually around the entertainment area,” says Kantilal. “The fastest growing market across India, Africa, China and Asia was in rural or non-urban areas and these subscribers needed unique services.”

He says entertainment is not the first concern of the rural consumer. The rural user wants to know: can the device help him in his livelihood?

“That is what we aimed at,” says Kantilal, who led the push for NLT. He says the Maharashtra pilot can be easily taken global, particularly in the next major growth area for mobility—sub-Saharan Africa. “People want…the device to improve their quality of life,” he says. And it isn’t just in rural areas that services are taking off. Ashok Thapa, a Delhi taxi-driver from Nepal who has spent the last decade in India, wonders why the mobile phone can’t be used for elections “just like how they vote in the singing contests on TV.” A liftman in a commercial building shows off his latest Samsung handset, which comes with the soundtrack of Aamir Khan’s Ghajini.

The mobile phone has moved from being a simple communication tool to an all-round entertainment and information device thanks to such services. “People will pay for a service which they find convenient and one that adds value to their device,” says Anshul Gupta, Principal Research Analyst for Mobiles at Gartner.

Serve or Die
But how many and what types of services can the present mobile technology— both handset and network— support? Services are being enabled increasingly by more and more powerful processors onboard mobile devices. While numbers from Gartner classify only around 10 per cent of the 1.2 billion handsets sold in 2008 as “smartphones”, Shivakumar believes that there are no more “dumb phones”. “When people say that the mobile is a computer, it is. It is a computer, a camera, an alarm, everything.... These are immensely capable devices.”

Service provider Idea Cellular sees psychographics in subscribers. “There are three psychographics under which you can classify all mobile users—productivity, convenience and safety,” argues Rajat Mukerji, Corporate Director, Idea. “We have backed Nokia’s service because we feel that that it is the second aspect, convenience, which will be the big selling point in rural India in future. And once that is established, people will see that mobiles are productive also as they can enhance livelihood.” 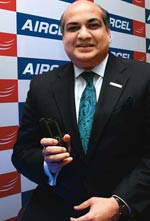 Sandip Das
The Differentiator
The rush to get into services cannot be explained by the need to make money, says Gupta, but to increase sales of core offerings. According to Simon Beresford-Wylie, CEO, Nokia-Siemens Networks, the “business of pipes”, i.e., plain vanilla products, will exceed $1.2 trillion (Rs 60 lakh crore) this year globally. The current estimate of $100 billion (Rs 5 lakh crore) in mobile services annually is a drop in this ocean but it is not a number to be scoffed at, particularly since India is expected to lead the services revolution.

Services are helping push sales at Nokia. “Obviously,” says Shivakumar when asked about increasing handset sales. “The differentiator I can offer on my N-series devices will be NGage gaming, on XpressMusic phones will be Comes With Music (CWM) and on low-end rural handsets it will be NLT. The service is what will make people buy my device.” The same applies for operators, as exemplied by Aircel. “I don’t feel that there can ever be a onesize-fits-all approach to services,” says Das. “I do not think that is what Nokia, other operators or third-party players are doing. We have been very successful with data services in Malaysia and almost a third of our revenues are from services and in India we want to play a role there too.”

Click here to Enlarge
Mera Nokia is not unique; similar services are offered by operator Airtel and news agency Thomson Reuters. Airtel runs it in a deal with a fertiliser company, while “Reuters Market Light” already has 100,000 subscribers in Maharashtra and Punjab. But this competition highlights the problem in services. Every stakeholder is fighting for a share of the pie.

Cost conundrum
Hugo Barra, Group Product Manager, Google Mobile, believes that it will be a healthy ecosystem where everyone will co-exist. “Operators, vendors and service providers will need to work together.

There is no point having services for free, like we do, if it costs a lot to access them over a network like it does in India.” He notes that in most parts of the world, cheap access plans have powered data usage from mobile devices, and says that India, too, needs to move to such a regime. In the US, the inflection point for data usage came in 2007, when unlimited data access plans tumbled to $5 a month (in India fully unrestricted data plans cost Rs 499 with most carriers).

Barra brings up the biggest bugbear of mobile services: the services that have done well until now have been low-data ones. Even NLT is a service offered over SMS rather than the Internet. Typical data charges on mobile networks are 10 paise for 10 kilobytes, so it could cost Rs 40 to download the typical four megabyte MP3 music file.

But operators have not cut rates: according to them, it has less to do with fleecing the customer and more with the network itself. “The fact is that today voice still accounts for 90 per cent of revenues and subscribers are being added at a fantastic pace and you can’t refuse to take on a subscriber. So, in order to ensure voice quality we have to keep data access limited,” says a spokesperson for one of India’s largest mobile operators.

Wait for 3G, Sir-ji!
Until now, services that have done well have usually been independent of the requirement for a data network. Caller ring back tones (CRBT) and SMS updates do not clog the network. However, Vineet Taneja, Head of Marketing, Nokia, is betting big that 3G networks will give services a fillip, none more so than Nokia’s CWM. “The idea is simple: the cost of music is built into the handset and users can choose the music they wish to download.” But the service will require a decent download experience, and that means 3G. “I guess that if such a service comes along, Nokia will be and is talking to operators so as to enhance the download experience,” says the spokesman for an operator.

Taneja has his hands full launching a whole host of other services, those that will integrate the mobile even more thoroughly into people’s lives. However, there have been some hiccups. Nokia, which acquired maps provider NAVTEQ in 2007, offers free navigation for a few months with its high-end devices but has not been able to launch a paid service for navigation or for its games platform, N-Gage.

Taneja admits there have been issues of pricing and distribution. “You have to understand that one cannot just have one system in India. Many of the kids who will use N-Gage may not have credit cards, so to buy the licence we would like them to walk into mobile outlets and buy the game over the counter. With navigation we have to figure out pricing as well as get more comprehensive maps.” But Taneja did admit that something big was around the corner. “I still feel that navigation and location services can be a major driver in India,” he says.

Not all of Nokia’s competitors have a strong services-led ploy: The No. 2 in the Indian market, Samsung Mobile, believes that devices will still be sold on the strength of their features. Sunil Dutt, Managing Director, Samsung Mobile India, points out that until data costs come down and reliability improves, India may not be a strong services market. “We have moved into offering services in mature markets such as Korea and the US. I still believe that Indian consumers want their devices to have top-class features. I am not ruling out services, I just do not think the time is right just yet.”

Hugo Barra
Pied Piper’s plight
That is an opinion echoed by Google’s Barra. “People will not want to pay for services that they can get for free, and the services will be free because there is a massive opportunity for advertisers to come onto the mobile platform. This is still untapped, thanks to the proliferation of location information, specific advertising, and I mean non-intrusive advertising can easily come onto the mobile. The mobile will also lead to a whole host of unique services. We are about to roll-out a voice-activated mobile search.”

But the real reason Nokia is getting into services is not about making consumers lives easier or earning incremental revenue. Nokia has pushed into services in a big way across the world with its “Ovi” (Finnish for “Door”) platform, and the amount Nokia can suffer when competitors launch services globally is highlighted in its massive erosion of smartphone market-share as competitors launch new, services-heavy devices. Apple’s success in the smartphone space—in just three years it has grabbed an eight per cent share almost entirely at Nokia’s cost—rides on its Application Store, which sells, you guessed it, services.

“The stand-alone product era is over. The new game is product plus services. The devices will be the rock on which we will build our solutions,” says Nokia’s Shivakumar.