The other Khan: A marketing genius

Films are his bread and butter, and endorsements his jam. Aamir Khan, in contrast to SRK, has fewer irons in the fire but he's as effective. 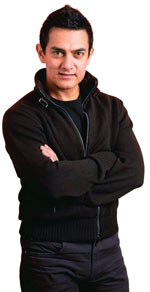 A "marketing monster" is what Raj Kumar Hirani, maker of the record-busting film 3 Idiots, calls Aamir Khan. Hirani should know. Prior to the launch of 3 Idiots, Aamir Khan was on a countrywide roadshow, in disguise, doling out prizes to those who recognised him. Elsewhere, he was strategically placing “butt chairs" at multiplex chains.

3 Idiots isn't the first time Aamir has shown his marketing mettle. To promote another blockbuster, Ghajini, in 2008, he turned barber for a day to give his fans the Ghajinistyle haircut. The film was a hit, collecting Rs 225 crore at the box office (worldwide). Now that record has been broken by 3 Idiots, which garnered Rs 240 crore in just the first 10 days—the highest revenue ever earned by a film made in India.

Clearly, Aamir's hand—onscreen and behind the scenes—in films like Ghajini and 3 Idiots, has a large role to play in their success (he reportedly charges around Rs 20 crore per film and gets a share of profits). But arguably, his bigger success is in running a production company that has a 100 per cent record of superhits—three out of three films so far from his stable have raked it in.

Set up in 2001, Aamir Khan Productions has so far released Lagaan, Tare Zameen Par and Jaane Tu Ya Janne Na. Lagaan, made with a budget of Rs 20 crore in 2000, earned five times that amount. Tare Zameen Par brought home Rs 130 crore after being made for Rs 10 crore, and the last film clocked worldwide box office revenues of Rs 120 crore.

That's a high-margin business if ever there was one. Now for the jam: Aamir- endorsed brands don't come cheap. He is estimated to be the highest paid brand endorser and charges Rs 12 crore per brand (as against SRK and Big B who charge Rs 7 crore and Rs 3 crore, respectively).

In 2009, he endorsed about 15 brands (Samsung and Tata Sky to name a couple) and has earned some Rs 180 crore from endorsements alone. After the runaway success of 3 Idiots, Aamir has recently signed up as the brand ambassador for Etisalat of the UAE, which is set to launch its wireless telecom services in India. The reported price tag: Rs 30-35 crore for three years.