Restarting infrastructure will be among the big challenges for the new government.

It was a historic event on Christmas day last year when Prime Minister Narendra Modi inaugurated the Bogibeel bridge in Assam. The 4.9-km bridge over the mighty Brahmaputra is the second-longest rail-cum-road bridge in Asia. It reduces travel time between Tinsukia in Assam to Naharlagun in Arunachal Pradesh by more than 10 hours, while shaving off three hours of train travel time between Dibrugarh and Delhi. It reduces the distance between Rupai (Assam) to Roing (Arunachal Pradesh) by 165 km, a daily fuel saving of Rs 10 lakh. The cascading economic benefit to the region is even greater.

At the same time, it also highlights the trials and tribulations that large projects face in India. Part of the Assam Accord of 1985, Bogibeel was sanctioned in 1997/98, but construction began only in April 2002. Multiple missed deadlines resulted in project cost rising 85 per cent to Rs 5,900 crore.

Delays and cost escalations have become the norm in Indian infrastructure projects. Any large project requires over two dozen clearances from Central and state governments. Add to that the issue of acquiring land, and the average delay for any large project of over Rs 150 crore in India as on October 2018 was a jaw-dropping 44 months. This has begun to take a toll on investment. It has also bruised both private sector companies with protracted debt overhang and banks that lent money to them, leading to the twin balance sheet problem and rise in non-performing assets or NPAs.

In Nitin Gadkari, the NDA government had one of the most efficient ministers who pushed infrastructure development. Despite the government pumping money into the sector, its problems have not been resolved. With the government slowing funding of projects in the final year of its term, things are only expected to become worse.

Various indicators show the stress in the infrastructure sector. Power generation grew 3.56 per cent in 2018/19, the lowest in five years. Finished steel production grew 3.72 per cent, the slowest in three years. Sales of heavy commercial vehicles slumped 13.6 per cent in April. The overall debt of the industry rose 6 per cent in 2017/18, after declining nearly 5 per cent in 2016/17. In 2018/19, it is estimated to have increased even more.

"There are challenges as the liquidity crunch is there and demand is not forthcoming, except in retail, which gets a push due to elections. Project construction or big infrastructure projects have come to a standstill," says Anil K. Chaudhary, Chairman, Steel Authority of India. "People don't have money to make purchases even though they are out of stock and want to, but are impacted by liquidity constraint. They are waiting for the right time."

The long-drawn out election has shifted focus towards agrarian distress and unemployment. The task of building infrastructure has taken a backseat.

The big worry is the fall of the Public Private Partnerships (PPP). Since 1991, of the 9,293 infrastructure projects awarded so far less than a fifth or only 1,756 projects have been granted through the PPP route. The majority have been routed through the traditional government procurement route and the remaining by direct private sector investment. But PPPs made up for the lack of numbers by the size of the investments. Of the total Rs 65.4 lakh crore worth of projects commissioned in the last quarter century, almost 40 per cent or more than Rs 24 lakh crore have been through this route. Between 2007 and 2012, when companies were taking bets on infrastructure projects, PPP projects hit a high of 161 worth Rs 1,26,655 crore in 2010/11. Since 2012/13, there has been a decline that became grave in 2017/18 - just 12 projects worth Rs 4,675 crore, the lowest in more than a decade. "On the domestic side, PPPs have taken a nosedive. In a situation where the private sector could have bid for PPP projects, the balance sheet and liquidity position is under strain due to the current situation in the banking and NBFC sector," says Vinayak Chatterjee, Chairman, Feedback Infra. "It is actually good that domestic companies are not bidding for any projects because a lot of restructuring of balance sheets is going on."

The distress is real. Ten of the 12 companies identified by the RBI for bankruptcy proceedings in 2017 were directly involved in infrastructure. "There are few sectors where private sector could have put in money. Between 2008 and 2012, private players were bullish on power. A lot of fresh capacity was coming up and the government supported them saying new capacity will find buyers," says Ashish Nainan, Research Analyst at Care Ratings. "A lot of foreign capital flowed into telecom. In roads, there was buoyancy in investment. Post 2012, we saw these as the worst-performing sectors."

It is likely that once the NPA mess is cleared, private players will return, but getting confidence back may not be easy. Yet, it needs to happen fast as public sector spending seems to be at an end. The number of projects commissioned by the government directly in 2017/18 has fallen to a decade low of 183 worth Rs 66,450 crore against 929 projects worth Rs 3.7 lakh crore in 2016/17.

Retrieving the Vijay Kelkar Committee report on PPP from the dustbin and implementing the recommendations could bring private players back in the game. Some reforms suggested by it were protection to private parties against abrupt changes in economic or policy environment, revisiting the model concession agreement to incorporate project-specific risk assessment, issuance of deep discount or zero coupon bonds to reduce debt servicing charges in the initial period of a project, setting up independent sectoral regulators to reduce bureaucratic and political interference, and the option to offer equity to long-term investors after completion of a project.

"Even after the balance sheet is restored, I do not think the Indian private sector will invest unless it sees some very big reform in the way PPPs are structured," says Chatterjee. 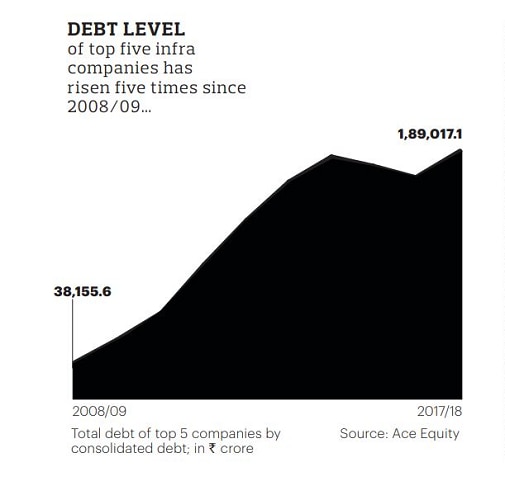 Not everything is bleak, though. Government data indicates that India is creating infrastructure like never before. A record 1,452 large infrastructure projects with an outlay of over Rs 150 crore each were in various stages of completion as on October 2018. This is 20 per cent growth on an average over the last four years.

According to Crisil Ratings, projects under hybrid annuity model (HAM) worth over Rs 1 lakh crore offered by NHAI have achieved debt funding. The tie-ups have been driven by low risks in HAM, prudent bids and track record of execution by strong sponsors. "The roads sector has seen significant improvement in completion time and cost escalation due to government intervention in land acquisition," says Nainan of Care Ratings. Financial closure of projects is taking centre stage. Convincing a banker to lend has become a challenge for any infrastructure player. High NPAs and a vigilant RBI made the banking community nervous about lending to big-ticket infrastructure projects. In 2018, the RBI put 11 banks under Prompt Corrective Action, restricting their ability to lend to big projects. This further dried up the already shrunken pool of funding sources for the industry.

"With the kind of problems banks are facing, they may have to abort financing infra projects," Dinesh Khara, Managing Director, SBI, said in August 2018.

The default crisis at IL&FS further spooked the lenders. With a debt of Rs 90,000 crore - Rs 60,000 crore tied up in on-going projects - the near-collapse of IL&FS has put the fate of many infrastructure projects in jeopardy.

Many private infrastructure players pointed out reluctance of banks to lend as a worry. The decline in investment in 2017/18 is partly due to that. "It is not a problem of liquidity or interest rate. It is the fear of NPAs. Bankers told me they are happy to fund me but not infrastructure," says a promoter of an infrastructure firm who wished to remain anonymous.

Experts say there is a need for alternative ways of lending for infrastructure as commercial banking is not structured to deal with risks. Globally, countries use long-term funding mechanisms like Infrastructure Investment Trusts, Real Estate Investment Trusts and pension funds. "Long-term finance for infrastructure projects cannot be funded by commercial banks. It requires a gestation period of 15-20 years which the financial structure of a commercial bank is not prepared to handle," says Chatterjee of Feedback Infra. "We need to develop new sources of long-term funding. That was the mistake we made in the last decade."

The private sector is disinterested, the government has its hands full and the bankers are in a shell. The Indian infrastructure sector is waiting for a dash of inspiration.