However, it scores a distant 11th in the ‘Life after Work’ index — not because of a lack of malls, restaurants or movie theatres of which it has plenty — but because of its shoddy roads and inconsistent power supply.

Here’s a peek at what separates the top five cities from the rest of the pack.

Gurgaon
All grown up 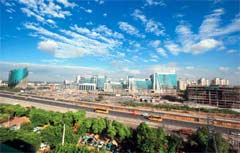 World-class feel: Gurgaon has attracted yuppies and MNCs by the droves
As little as two decades ago, Gurgaon took its first baby steps from a sleepy little hamlet in Haryana to becoming a bustling township, snapping up Delhi’s corporate gentry as its tenants. Today, the new kid on the block is attracting hordes of multinationals, bringing in their wake swish restaurants and hotels.Hard to believe, but take a drive down the recently constructed fivelane, world-class expressway to Gurgaon 29 km away—make sure you stay well behind manic tempos, SUVs and motorcycles weaving across lanes like deranged Formula 1 drivers—and you will soon pass a clutch of glittering buildings that are home to some of the biggest corporations in the world. What’s Gurgaon got that Delhi doesn’t? “I would say it’s got the feel of an international city—barring some potholes of weak infrastructure,” says real estate consultant Anshuman Magazine, Chairman and MD, CB Richard Ellis South Asia.

This world class feel first came about in the ’90s when the Haryana government initiated a favourable tax policy to lure companies. Private firms began constructing top notch buildings. Proximity to Delhi’s airport was a bonus. Soon, Gurgaon became the world’s outsourcing hub—Pioneer GE Capital International Services (GECIS) set up shop in 1997 and a tsunami of other BPO companies followed. Today, many of India’s private airlines such as IndiGo and SpiceJet call the city home.

There’s more to Gurgaon than just its tax policies. In the wake of this corporate migration, the city has attracted thousands of young professionals who find that living, working and playing in Gurgaon is cheaper, more convenient and fun than Delhi. “There appears to be a vibrant cultural takeoff here,” says Manoj Madhusudanan, VP- Business Research, Evalueserve. Ajay Bijli, for instance, debuted his bowling alley BluO here rather than Delhi. Terroir, perhaps India’s finest French restaurant, is not in Delhi, but Gurgaon.

Gurgaon is also India’s ‘mall’ capital, selling Versace and Gucci in places where buffaloes once roamed. But malls bring traffic—lots of it— and Gurgaon’s roads are in bad shape and public transportation, a mess. That hasn’t stopped people and industry from flocking here. 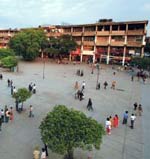 World-class feel: Gurgaon has attracted yuppies and MNCs by the droves
What on earth is going on in Chandigarh? It has the highest per capita income in India of Rs 1,41,863 and the highest percentage of people in any city (22 per cent) earning above 10 lakh a year. Before you rush off to pack your bags to move there in the hope of striking gold, it’s worth noting that much of this wealth comes from rich farmers and property owners extracting fat rental incomes. Employment growth, for instance, was a paltry 2 per cent. This is not to say that wealth generation is dead. “Chandigarh always had an entrepreneurial spirit but a large part of it had shifted out over the years. Now however, a large number of educated middle class people are willing to jump in and start their own business,” observes long time city resident Anupama Arya, 41, who cofounded Mobera Systems with husband Puneet Vatsayan in 2003 after returning from Silicon Valley.

“Today, unlike in the early 1990s, a young guy has the opportunity to not only work but also make an aspirational living as the city’s brand equity is increasing,” Vatsayan points out.

Famous for being a Le Corbuisierdesigned city but little else, today Chandigarh is being noticed for its low crime rate, safety for women, regular power supply and verdant avenues and thoroughfares.

Commuting time for Vatsayan, 41, —who resides in Panchkula, a Chandigarh suburb, about 14 km from his office—during peak office hours is just 25 minutes. Much of the credit for making the Union Territory a hub for boutique IT and ITES companies lies with its bureaucratic administrators. “Not being owned by any one political party—it’s in neither Punjab nor Haryana—has ensured that initiatives are implemented faster,” says Partap Aggarwal, 50, Chairman, CII Chandigarh and MD, IDS Infotech. Something other cities should take note of.

Chennai
Best of both worlds

Southern surprise: Chennai ousts both Bangalore and Hyderabad in Life After Work rankings
If Mumbai can be likened to a vacuous diva, and Delhi an aggressive businessman, Chennai is probably an industrious IIT aspirant with thick-rimmed glasses and a passion for quizzes. So, it’s not surprising that this low-key, high-performing city attracted Rs 26,000 crore in investments in the last three years. Big names such as Renault, Nissan, BMW, Diamler, Ford, Hyundai, and Nokia have made Chennai their home. “Chennai’s biggest strength is its mature ecosystem for manufacturing which also happens to be very cost competitive,” says M. Velmurugan, Vice-Chairman, Tamil Nadu Industrial Guidance Bureau.

However, Chennai is not just all work and no play. Its youth can often be found drinking beer on Elliot’s beach and rocking out to cult classics from Jethro Tull or Uriah Heep. While Chennai ranks 6th on our Life at Work Index, it comes in 3rd in our Life After Work category. Says Ranjini Manian, Founder-CEO, Global Adjustments—a firm involved in relocating expatriates to India. “In the 14 years that I have been involved helping expatriates, the common refrain I hear is that warmth of people in hennai is overwhelming.”

Chennai is also #1 on our education list and “has some of the best schools in the country,” adds Manian. On track: Infrastructure is keeping pace in the city
The year 2009 hasn’t been a good one for Hyderabad. One of its favourite sons— B. Ramalinga Raju—brought much ill-repute on himself and corporate India as a whole thanks to the massive scam at Satyam Computer Services.

Yet, Hyderabad remains one of the nerve centers for much of the country’s IT activities, boasting stateof-the-art facilities unrivalled by most cities in India and attracting droves of pedigreed Indian software firms and reputed multinationals such as Google and Amazon.

Microsoft has set up its biggest R&D facility outside the US there. It has a world class international airport that is the envy of other Indian cities and an outstanding business school (Indian School of Business).

Kiran Karnik, Satyam’s new Chairman, who has been a regular visitor to Hyderabad of late, says that “this is a city where current and future infrastructure projects are keeping pace with the growth of the city.” It has the top notch colleges and universities like in Chennai and Bangalore, which allows it to feed many of the companies with skilled and qualified workers.

So what’s missing? The city lacks a fast and efficient public transport system. Massive power cuts have become a nightmarish reality. Partygoers will be disappointed by the dearth of quality nightspots, a stark contrast to its fellow silicon city Bangalore.

Still, as far as ease of doing business is concerned, Hyderabad’s a hard act to beat. Bandra-Worli Sealink: Being built for a decade
Mumbai should be #1 on this list. The city is India’s financial mecca, home to one of the world’s largest film industries, the country’s best restaurants, bars, clubs. You name it and Mumbai’s got it. Except for that #1 slot. So what’s gone wrong? Possibly the most read words in the city today are: ‘Kindly bear with us for a better tomorrow.’ Mumbai has been a work-in-progress project for several years now and disgruntled citizens are now asking when that promised ‘tomorrow’ is likely to arrive.

Mumbai, better known as Asia’s slum capital, has far exceeded its carrying capacity. Dense populations reside in tiny apartments and make do with facilities that are now far behind other Indian cities. “We need open spaces—there is not a single green zone in the centre of the city. If Mumbai is India’s Manhattan, then where is Central Park?” asks Shyam Chainani, honorary secretary of Bombay Environment Action Group (BEAG).

Civic authorities in Mumbai have grand plans of becoming the next Shanghai. They plan on building 53 skywalks, three metro lines, monorails and several flyovers.

That’s laughable considering that today Mumbai’s roads are choked with traffic, power cuts are frequent and lengthy, buildings ramshackle, public services minimal and the poor left to fend for themselves amidst unimaginable filth and degradation. For the swish set who live in leafy south Mumbai or Bandra, life is peachy. For much of the rest it can often be a living nightmare.

Commissioner of the Municipal Corporation of Greater Mumbai (MCGM) Jairaj Phatak is uninterested in questions about Mumbai’s infrastructure. “All we’re focussing on is our economic progress, and when it comes to all else, people can say what they want to,” he adds. Does he know that Mumbai had a close to zero per cent job growth last year?

Despite promises from the governing authorities, public trust is eroding fast. Neera Punj, founder of NGO Citispace which attempts to save the city’s open spaces says, “I am surprised that Mumbai was on top of the list at all.”

After work (Rank 7)
Number of registered hospitals: 559 (highest)
Number of malls: 81
Access to toilet facilities: 49% (2nd lowest along with Jaipur, after Patna)