Lockdown has given a big push to virtual courts. Will this be the turning point in Indian judiciary?

Recently, a judge in the Rajasthan High Court adjourned proceedings on a bail plea after the petitioner's lawyer appeared in a vest for the hearing conducted through video-conferencing.

The lockdown has forced courts to take up urgent matters via video-conferencing. While the legal fraternity is slowly warming up to the idea, it may take some time before such hearings become common. Though there are problems which will take time to get resolved, many in the legal fraternity say virtual hearings could be a game changer in the long-term.

Shankh Sengupta, Partner, Dispute Resolution, Trilegal - a law firm, recently completed arguing a case for the Association of Mutual Funds in India (Amfi) against IndiaBulls in the Delhi High Court. The hearing was conducted through video-conferencing. For Sengupta, it was a good experience even though there were initial problems regarding internet connectivity. "The judges were well prepared, and the lawyers were very disciplined. We were happy that even in a lockdown situation, we were able to get the court to convene a hearing involving several lawyers and parties over a very important matter of public interest," he says. The division bench of two judges heard four appeals at one time, with lawyers representing at least five different parties. According to Sengupta, it was a fairly big hearing, and in the normal course, it would have been a packed courtroom.

For virtual courts to continue, systems and processes have to be recalibrated, along with better discipline and time management.

Shardul Shroff, Executive Chairman, Shardul Amarchand Mangaldas & Co, says discipline is the key. "The judges cannot have the benefit of too much argument, you cannot stretch an argument for over an hour. The submissions need to be more in written form, and have to be done carefully. There have to be specific timelines so that one case does not go on forever, derailing other hearings," he says.

Agrees Vineet Naik, senior lawyer in the Bombay High Court. For virtual hearings to be the norm, both judges and lawyers will have to adopt a different approach. "Compulsory written submissions have to be circulated before the matter comes up, which the judges must read and come, and lawyers must limit themselves to the time of argument," he adds.

Apart from bringing in discipline in ways arguments are conducted, processes need to evolve as well. Virtual courts need not always function through video-conferencing; it could be audio or paper hearing as well. In fact, thousands of minor cases such as traffic violations can be easily heard online based on written arguments. Also, for virtual courts to be successful in future, the scope of hearings should be expanded to more complex cases, where witnesses need to be cross-examined.

Cyril Shroff, Managing Partner, Cyril Amarchand Mangaldas, says courts are already expanding the scope of such hearings. "The Delhi High Court has expanded the sphere of hearing of matters to include matrimonial matters, domestic violence cases, eviction matters, criminal cases where a convict is in custody, among others."

Whether complex cases could be taken up will depend a lot on technology as well as procedural evolution.

As Cyril Shroff says, of the 32 million cases that are pending before the district courts, around 380,000 cases relate to cheque bouncing and 850,000 to motor vehicle accident claims. According to a conservative estimate, around 40 per cent pending cases could be disposed of based on written arguments, he adds.

Cyril Shroff says the exact form or process that will finally be adopted will be one that has the approval of major stakeholders. He predicts: "It is expected that virtual courts will involve both electronic filings as well as digital hearings. While video-conferencing is one obvious form of digitisation of hearings, we can also anticipate a wider set of alternatives being adopted for different categories of cases, including asynchronous video hearings, audio hearings or paper hearings." He feels the adoption of each of these formats will bring its own nuances and new processes in respect to pleadings, authentication procedures, evidence recording, payment of fees, etc.

Of course, technology is the key for virtual courts to become feasible. You cannot have connectivity problems, audio lags and data safety issues. 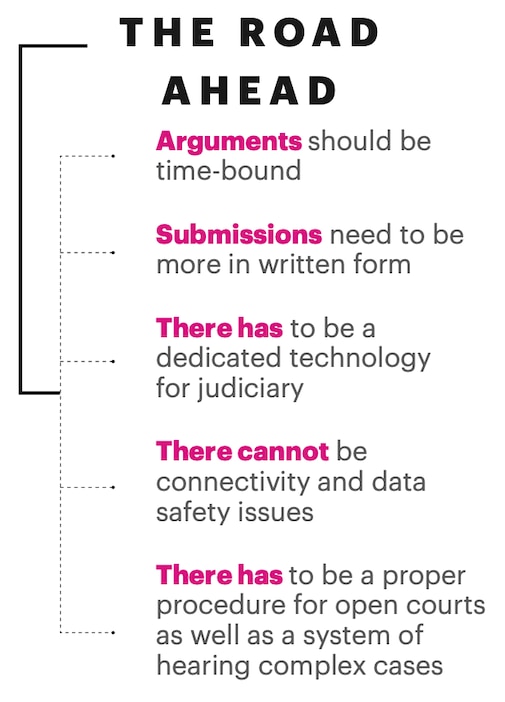 Naik, who represented a couple of his clients during the lockdown period through video-conferencing, complains that the first 15-20 minutes are wasted in connecting with all parties. "I don't think we have the required technologies to handle this kind of traffic. The judges can't hear me, then I can't see others. Then some technician will come and fix the problem," he says.

Mamta Binani, a lawyer and a company secretary, says there is need for a dedicated technology for judiciary. She says apps, including Zoom and Jitsi, have limited utility. With Zoom running into safety hurdles, and people filing petitions against the use of a foreign app for video-conferencing, some courts recently shifted to Vidyo Mobile and Jitsi apps.

Karnika Seth, cyberlaw expert and Managing Partner, Seth Associates, says virtual courts are not limited to just video-conferencing, there are other aspects as well. "It starts from e-filing to conduct of proceedings through digital or electronic medium. The Supreme Court is also working on artificial intelligence (AI)-enabled courts to help the general public have easier access to the judicial system," she adds.

Besides technology and procedural issues, a big problem is how to conduct open courts virtually. An open court is one where proceedings are conducted in presence of public. The principle of open courts says that when proceedings are open to the public, chances of justice getting delivered are higher.

While open courts are possible in physical hearings, it is difficult to conduct them in virtual hearings, unless the video is widely shared, says Binani.

Another issue with virtual hearing is ensuring that the witness is not getting coached or prompted in the background when the lawyer is cross-examining him/her.

So, how things pan out in the future will depend on the adaptability of both the bar and bench.