The list of companies that can be called Indian multinationals is long and growing. What all should one consider while investing in these corporate giants? Money Today finds out.

Tanvi Varma/Money Today
For India, globalisation is now a two-way street, with the best domestic companies willing to invest wherever there is a potential market and they can earn good returns.

This is what Aditya Birla Group Chairman Kumar Mangalam Birla recently said about going global: "Country risk for India just now is very elevated and chances are that for deployment of capital you would look to see if there is an asset overseas than in India."

He was expressing what scores of industry leaders, down from Ratan Tata, have been saying for quite some time now - that expanding abroad in today's close-knit world is an imperative for big companies.

But what about the common investor, whose bets on companies such as Tata Motors, Tata Steel, Hindalco and Sun Phamaceuticals are as a result exposed to forces across national borders that can be difficult to predict?

To know the scale of the problem, just one fact will suffice - the blue-chip companies mentioned above earn more than 60 per cent revenue from overseas operations. What's more, this is a small sample. The list of companies that can be called Indian multinationals is long and growing.

How should one look at these global citizens from India's corporate world? What all should one consider while investing in these corporate giants? What are their unique benefits? How are their businesses affected by global trends? Lastly, but most importantly, are the diversity and stability they provide to the portfolio real?

Vinay Khattar, head of research, (Individual Clients), Edelweiss Financial Services Ltd, says the huge revenue and presence in different geographies make these companies global. "These companies were very strong domestically and flush with cash due to several years of strong economic growth in India. They went international as a logical extension to capture new growth," he says.

Some big deals, for instance Tata Motors' acquisition of UK's Jaguar Land Rover, or JLR, or Mahindra & Mahindra's purchase of Ssangyong of South Korea, opened up new markets for the buyers. "Most of these Indian companies were earning good profits and naturally at some point thought they were ready to bid for giant offshore companies," says Dipen Shah, head of research, Private Clients, Kotak Securities.

It was way back in 2000 that Tata Tea set the ball rolling by taking over a global company twice its size, Tetley Tea, the second-biggest tea company in the world. The combined entity, now called Tata Global Beverages, earns 70 per cent revenue from outside India.

Likewise, in 2007, Tata Steel paid $14 billion for Corus, which was bigger than its own domestic operations. The deal, the largest takeover of a foreign company by an Indian entity till date, has made Tata Steel the world's fifth-largest steel group. Then, Hindalco made headlines when it paid $6 billion for Novelis, which was much bigger than the Aditya Birla group company. The trend has not stopped since. WHAT WORKS: BENEFITS OF INVESTING IN INDIAN MNCs

Technology:
A big plus of having a global platform is access to the best technology and management practices as well as new markets. Higher volumes also spread the cost of development of new products.

"Acquisition of JLR by Tata Motors or Korea's Ssangyong by M&M or Bajaj Auto's stake in KTM has helped these Indian companies introduce more sophisticated engines and products in the country," says Khattar of Edelweiss. For instance, Bajaj's Pulsar 200 NS, a hot-selling motorbike, is based on a KTM platform. Bajaj is the secondlargest shareholder in the Austrian bike maker.

Access to latest technology is crucial as Indians consumers come of age and demand the best products. A global presence can enable these companies make the best products in India at a relatively lower cost. For instance, according to media reports, JLR is looking at manufacturing cars in India.

"Similarly, when global companies enter India, local companies benefit if they already have a relationship with them," says Khattar. For instance, auto parts maker Motherson Sumi, a supplier to Volkswagen AG of Germany, gains from the latter's projects in India.

For Bharat Forge, each acquisition has added to capabilities- access to the US pick-up truck market, the European engine assembly market and the aluminium castings market. The company now earns 69 per cent revenue from outside India. Acquistions by Bharat Forge include Federal Forge in the US, Imatra Kilsta in Sweden, Scottish Stampings in Scotland, and Carl Dan Peddinghaus and CDP Aluminiumtechnik in Germany

Similarly, Ssangyong is helping Mahindra & Mahindra establish presence in South East Asia. This can significantly start contributing to the latter's top line and bottom line in the coming quarters. This is already showing in the stock's performance compared to the broader market. With this, and other acquisitions, international operations now account for 30 per cent of total revenue (as on March 2012) compared to 10 per cent a year ago. 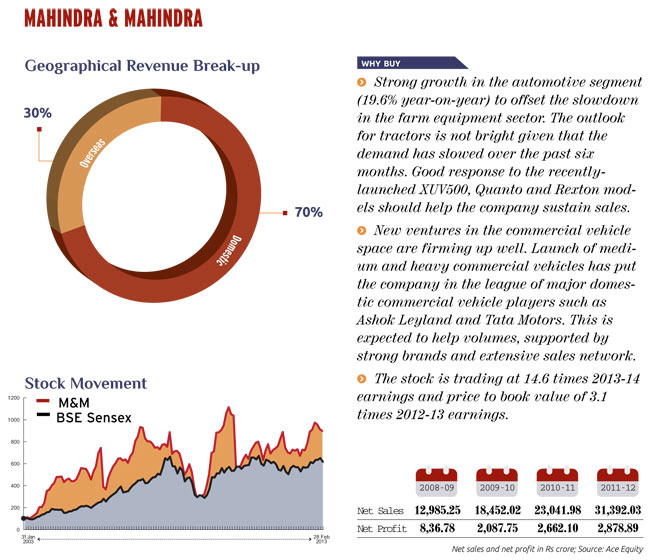 Fund-raising:
Another advantage of having a global presence is access to global markets for fundraising. Add to this the lower cost of capital in the west and you know why so many Indian companies are raising funds in foreign markets to reduce their high-cost debt. For instance, Bharti Airtel raised $1 billion from an overseas bond issue in March. The 10-year unsecured bonds will pay a coupon of 5.125 per cent per annum, much less than the cost of raising debt in India.

"For companies with a global presence, it's a good option, as it helps them get better visibility globally," says Khattar.

Raising funds in a foreign country also reduces currency risks, which is a big factor for companies that earn most of their income in a currency other than the rupee. Diversification, new markets: A global presence increases companies' product range and customer base and lowers risk as poor performance in one market is balanced by a good run in another.

The best example of this is Tata Motors' purchase of JLR. Just after the deal, investors burnt their fingers, as the markets battered the stock. However, those who kept nerves and held on to the stock hit the jackpot. The two British luxury car brands are now worth $14 billion today as against the $2.5 billion that Tata Motors had paid for them.

In fact, they have been the main drivers of the stock and financial performance of Tata Motors, which has been facing a lot of pressure in the domestic market. Tata Motors' revenues have grown at 38 per cent and profit at 45 per cent compounded annual growth rate since 2007. The markets, too, have cheered the stock.

"Since the company being bought was not doing well that time, investors did not know what will be the payback period or when the company will revive. There was also fear about balance-sheet leverage," says Shah of Kotak Securities.

Geographical diversification is what has been helping Tata Motors grow.

"Its standalone domestic business has been affected by tough macroeconomic conditions in the country. The domestic slowdown, in terms of both volumes and numbers, is being more or less compensated by the international operations of JLR," says Joshi of Angel Broking. WHAT DOESN'T WORK: PITFALLS OF INVESTING IN AN INDIAN MNC

"If a company is making an acquisition, valuations and timing in the economic cycle are of paramount importance," says Goutam Sinha Roy, vice president, Motilal Oswal.

Corus, for instance, was acquired by Tata Steel when steel demand was weakening due to slowdown in the US and Europe, which impacted Tata Steel's profitability. In fact, most companies with overseas subsidiaries were exposed to the 2008 global slowdown. "The slowdown hit the top line of most companies across the globe. Added operational costs, rising commodity prices and reduced orders resulted in a sharp drop in bottom line of most global companies," says Joshi of Angel.

However, Tata Steel's Indian operations continue to do well. The tail risk here is that if the standalone business does reasonably well but the overseas arms are stressed, the overall growth will be hit, especially considering the heavy costs that are incurred in buying a big global company. Hindalco, too, has been under pressure. Like Tata Steel, it found itself saddled with high-cost operations while demand in its principal markets slowed.

Suzlon Energy, the world's fifth largest wind turbine maker, is another example of a global foray gone wrong. "The company has been saddled with huge debt after its big acquisition, RE Power, five years ago. It is also facing issues related to integration of the two companies," says Harshvardhan Dole, analyst, institutional equities, IIFL. Its interest costs have risen from Rs 100 crore in 2007 Rs 900 crore in 2011-12. The total debt has grown six-fold during the period.

Further, global slowdown, removal of certain tax breaks for wind power producers in India and competition from cheap Chinese products have dented its revenue and profitability. The stock of the company, which is undergoing debt restructuring, is trading at Rs 15, 95 per cent below its all-time high of Rs 454 in early 2008.

Synergy:
Companies may also face issues related to cultural and strategic fit, which may lead to difficulties in integration. Punj Lloyd, for instance, has been affected by its global presence due to project delays and cost overruns. "Jindal Steel and Power has had issues in Bolivia due to differences with the government there, which hit its mining operations," says Shah of Kotak.

Policies:
Changes in the host nation's policies can also impact companies. For instance, Sri Lanka recently increased import duty on vehicles, which hit Bajaj Auto, a big supplier there. Similarly, for information technology companies, there is a lot of political opposition to offshoring in some countries.

Currency movement:
This can impact the fortunes of companies big time. "An unfavourable currency movement can result in forex losses in the profit and loss account," says Joshi of Angel. Of course, these are translation losses/gains and can be reversed in subsequent quarters depending upon the movement of the rupee. Companies that earn in dollars, for instance IT companies, gain when the rupee weakens. A strong dollar helps these companies report a healthier bottom line. Although investing in India's global companies is risky, a large number of them have tasted success. Hence, one must invest in them, but with caution. "These companies offer diversification, providing a good opportunity when the global economy starts doing well, which is expected from the next quarter," says Shah of Kotak.

However, they are not immune to global problems, which blunted the global ambitions of Indian companies between 2008 and 2010. The crisis had its strongest effect in 2009-10, reducing outward FDI by 26 per cent as compared to 2008-09. While the total foreign revenues of India's top 50 companies remained unaffected in 2009-10, their international assets fell 4 per cent compared to 2008-09.

Khattar advises caution and prefers companies with Indian operations as the domestic economy is in a relatively better shape than the global one.