A visit to Dynamatic Technologies' noisy campus, in a busy industrial area in Bangalore, begins with a plant that would assemble airframes for a Bell utility helicopter and the Boeing Chinook. Workers wear black tee and jeans. A few are busy making machining tools, carved from wood, aluminium and steel. A block painted in yellow is some distance away. That's where workers assemble flap- track beams for Airbus' A320 and A321 aircraft - the beams, which weigh 45 kilograms each, are critical structures connected to the wing and are used for moving the flaps during take off and landing. Every large aircraft requires six beams and the plant produces 45 sets a month.

"Our procurement from India has continued to increase. We just signed a big contract with Dynamatic," Eric Zanin, Chief Supply Chain Officer of France-based Airbus, told Business Today on a recent visit to India. In 2014, Airbus contracted Dynamatic for the supply of flap track beams for its A330 family of long-range jets. It represented a new high for the nascent commercial aerospace manufacturing industry in India. Thus far Dynamatic was a Tier-II supplier. It supplied parts to larger aerostructure companies such as Spirit AeroSystems which then assembled larger structures for Airbus. Now, Dynamatic will supply directly to Airbus - it has become the first Indian private sector company to become a global Tier-I supplier to Airbus.

Indeed, outsourced commercial aerospace manufacturing appears to be taking root in India. According to some estimates, Airbus Group alone sourced over $300 million worth of products and services from India in 2013/14. The figure was $200 million in 2011/2012.

Leading corporates with a presence in the commercial aviation segment - such as the Mahindra Group, Tata Group, Aequs, Dynamatic Technologies and Wipro - are hoping to reap the benefits of increased sourcing from India in the future. A windfall is expected because of several factors. According to Boeing, by 2033, the world's airlines will need nearly 36,800 new planes valued at $5.2 trillion. Significantly, between now and 2033, Asia Pacific will enjoy the largest share of new deliveries at 37 per cent.

The commercial aerospace market has large jetliners (Airbus and Boeing), slightly smaller jetliners (Bombardier), utility aircraft and business jets, small enthusiast planes like the two seaters and finally, the rotary wing aircraft (helicopters). The aerospace supply chain is now expected to transform because of the geographical shift in demand.

"There is a localisation need. There is also a progress in the capability set of Indian companies," says Pratik Kumar, CEO, Wipro Infrastructure Engineering. "It is far more economical to manufacture here rather than in the West from the standpoint of labour costs. Engineering skills, design skills, manufacturing skills are all more cost competitive," he adds. India is much cheaper when it comes to labour costs - about one-fourth that in the developed countries. According to a Deloitte report, the continued demand of passengers for lower airfares is "rippling through the value chain, from OEMs to their suppliers". Competitive pricing in the supply chain will be an ongoing challenge.

WIPRO'S BANGALORE AEROSPACE FACTORY - Pratik Kumar, CEO, Wipro Infrastructure Engineering, says there is progress in the capability of Indian companies in aerospace manufacturing
There is yet another reason why procurement could increase from the country. "India has engineering and a good educational system. Everybody speaks English. That is the key advantage of India," says Airbus' Zanin. Documentation, manuals, drawings, and most technical data in the aerospace business are almost always in English.

The company has joint ventures with American aircraft makers Lockheed Martin and Sikorsky - production is already shifting to India from other countries. "The Sikorsky S92 fuselage (main cabin) is now being produced as a single source in India. This was transferred from Nagoya, Japan, by Mitsubishi," says Sukaran Singh, Managing Director and CEO of TASL. The first cabin for S92, a four-bladed helicopter, rolled out in November 2011 and the company has produced more than 80. "Another project as part of the joint venture is producing detailed parts, which go into the making of the fuselage. We receive blocks of aluminium and the parts are curved out. Then they are transferred to the S92 assembly facility," says Singh.

Dynamatic's business can potentially multiply two and half times over the next five to six years based on the order book. The company generated just Rs 223 crore from its aerospace business in 2013/14. Arvind Mehra, Global CEO of Mahindra Aerospace, says that in the next 12 months, the company's new 250,000 square feet plant in Bangalore will have enough orders to run at full capacity for five years. "We have an opportunity to reach a peak volume of $250 million annually in three to five years' time," he says. The plant will assemble components and aerostructures in sheet metal, machining, and special processing. Tata Group's Titan expects to touch revenue of Rs 500 crore from aerospace components in the next five years - it is less than Rs 100 crore today.

While Dynamatic has a lead in the aerostructures game - their first deal materialised in 2008 with Airbus - Mahindra brings in the experience and expertise of also being an aeroplane manufacturer, not just a supplier of components and structures. Mahindra acquired Australian company GippsAero in 2009. The company makes 20-25 small aircraft a year with its portfolio ranging from two-seater to 18-seaters.

"We are not at the lowest possible chain in components. I think we are somewhere in the middle - we are doing simple to complex detailed parts and doing sub-assemblies," says Mehra on the company's expertise in manufacturing aerostructures. "In three to four years' time, we can start doing larger aerostructures. Mahindra has an advantage because we can cut metal and take it to building an aircraft." 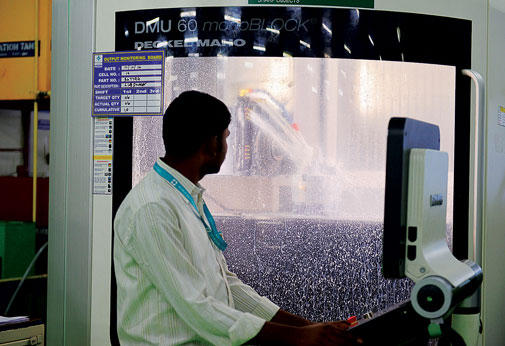 Titan, known more for its watches, diversified into aerospace around 2005. "Watch making is high-precision manufacture. We were looking at what else we can do to leverage our core capability. Aerospace manufacturing also has a tool room mindset - high precision, small batch, close tolerances," says N.P. Sridhar, Business Head of Titan's Precision Engineering Division. "We started with ISRO, making small components that go into satellites. Then we had a visit from UTC Group. That's how it triggered our thinking."

Meanwhile, Aequs has installed the largest forging press in Asia at its SEZ in Belgaum, Karnataka. It will be used to forge large airplane components and parts. The company is one of the largest private-sector players in the Indian aerospace industry. It makes landing gear and wing components, airframes, hydraulic valve actuators and structure assemblies for Airbus and Boeing. "The opportunity is large to 'Make in India'," says Arvind Melligeri, Chairman & CEO, Aequs.

Melligeri's biggest grouse is antiquated labour laws. "Just last month my compliance officer had to file 155 filings to various government departments. People keep talking of e-filing. We have not seen any of it," he says. "We have to improve ease of doing business by removing things like restrictions on overtime. "

While companies may be seeing the next wealth generation opportunity in commercial aerospace, the Indian industry will do well to guard against potential headwinds, warns Udayant Malhoutra, CEO and MD of Dynamatic. "Corporates think that this is a good profitable line to be in. They don't understand the risks associated with a complex manufacturing programme like aerospace," he says.

"The production is not just industrial, it is also artisanal. The products are assembled in a manual fashion. More than the senior management, it is the quality of the blue collar workforce that determines success." So companies would need good training facilities, a large workforce, and importantly, a harmonious relationship with them. "There is complete disconnect between industry requirements and skill training schools. While a large number of ITIs (Industrial Training Institutes) and diploma colleges exist, the curricula is completely dated," says Melligeri. "We have hired and spent money to train the 600 people required for our requirements after they have completed such courses. This reduces our competitiveness."

Clearly, there are several hurdles for the Indian aerospace industry despite the apparent massive opportunity. "If we want 'Make in India' to be a success, we need to address fundamental problems like cost of capital, adequate power and infrastructure as well as trained manpower. If we do that not just in aerospace but in other areas too, we will become competitive," sums up Melligeri.