What next for Vijay Mallya?

On December 18, Vijay Mallya turned 60. The day also marked 'ShastiPoorthi', an occasion when Hindus, and especially Mallya's GowdSarswat Brahmin community, reflect on the life gone by and plan for the future. While Mallya is intensely religious, it isn't clear whether he celebrated 'ShastiPoorthi' this time. All the same, he certainly had much to reflect about and plan for an uncertain future.

Known for living life king size, Mallya did not hesitate to throw a three-day birthday bash, according to media reports. Several reports suggested that Mallya had singing sensation Enrique Iglesias flown down to perform. A grainy footage on YouTube shows Iglesias belting out his hit song 'Bailando' (Dancing) at the opulent Kingfisher Villa in Goa. Even the normally circumspect RBI Governor Raghuram Rajan, without naming Mallya, lashed out saying, "If you flaunt your birthday bashes even while owing the system a lot of money, it does seem to suggest to the public that you don't care."

A former long-term aide of Mallya, who spoke to BT anonymously, said: "I don't think Vijay realises he has become a lightning rod for all criticism. Vijay is still in a bubble and has yet to realise that the music has stopped and the party is over."

On February 25, after announcing his resignation as Chairman of United Spirits, Mallya released a statement saying: "Having recently turned 60, I have decided to spend more time in England, closer to my children. The time has now come for me to move on and end all the publicised allegations and uncertainties about my relationship with Diageo and United Spirits Limited. ?..I am pleased to have been able to agree to terms with Diageo and United Spirits Limited. The agreement we have reached secures my family legacy."

As a part of the settlement, Diageo agreed to pay Mallya $75 million to exit the company, and not compete with it for five years. The former aide says: "How can $75 million secure his family legacy? Feel sad he has been reduced to this state."

While Mallya inherited substantial wealth, he built and grew that empire. When his father Vittal Mallya died in 1983, the UB Group had interests in brewing (UB), distilling (McDowell's), polymers (Hindustan polymers), batteries (UB-MEC), petrochemicals (UB Petrochemicals), pharma (stakes in Aventis Pharma, Bayer India) and food (Cadbury India). Most UB old timers say the group's size was a "few hundred crores" then. Vijay Mallya at his peak had nearly 40-plus companies in various sectors and billions of dollars in revenues. "If he had not been pig-headed on Kingfisher Airlines as I, Ravi (Nedungadi, former CFO of USL) and others warned him against?if only if he had ring-fenced that business? He played like he always does - all or nothing at all," says the former aide of Mallya. 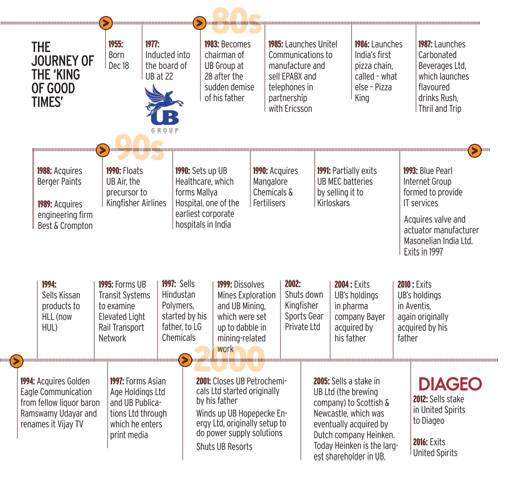 Indeed, the former aide might be maudlin about Mallya. Before starting to feel bad for him, it has to be remembered that Kingfisher Airlines owes Rs 7,000 crore to a clutch of mostly public sector banks. Hundreds of Kingfisher employees, suppliers and business partners have not been paid.

Picking up the pieces

Mallya still controls - directly and indirectly - about 32 per cent in United Breweries, which sells beer under brands like Kingfisher and Kalyani Black Label. As part of the understanding, Diageo has also allowed Mallya to buy three properties owned on USL's books in Mumbai, Delhi and Goa at 10 per cent less than market price, but it remains to be seen whether he will do so. He continues to be Chief Mentor of Royal Challengers Bangalore (RCB), an IPL franchisee cricket team owned by USL, in an 'honorary' role. Son Siddharth will be a director on RCB. A USL spokeswoman said, "There are four directors on the RCB board. Siddharth Mallya is paid customary sitting fees for attending board and committee meetings. Vijay Mallya has ceased to be a director and chairman of Royal Challengers Sports Pvt Ltd and is therefore not entitled to any payments from RCSPL."

Watson (a subsidiary company of USL), which held Mallya's share of Formula One's Force India team, is now controlled by Diageo, after it had to bail out the company on a loan default. Mallya now owns only a small interest in Barbados Tridents, a Caribbean Premier League franchise.

Mallya did not respond to BT's request for comments. Another former director of USL and a long-time friend of Mallya says, "Vijay intends as far as possible to settle the issue with banks, if they are reasonable. He is not a coward to run away. For a business failure, how right it is to hold him personally liable?"

Others point out that he was also a victim of circumstances. "If the current low prices of oil had been there then, Kingfisher would have survived," says a former employee. Mallya himself was quoted by wire agency PTI as saying: "Perhaps the only regret is that Kingfisher Airlines is not flying today when the oil price is so low."

By conservative estimates, Mallya is still worth over Rs 5,000 crore. The decision to stay in London may have been influenced by son Siddharth's presence there. Little is known about his (second) wife Rekha who stays in the US as well as his daughters Leana and Tanya. Mallya, a two-term Rajya Sabha MP, will be retiring from his post in June.

As he fights a slew of cases in Indian courts, balmy London beckons. Mallya will have ample opportunity to reflect on times gone by, and more importantly, what he can do to come back. At 60, while most people may look forward to a retired life, Mallya in spite of protestations to the contrary, is unlikely to do that.