What next in real estate?

Is it time to buy or sell or wait? Here's how to navigate in the anxious real estate market.

Too many directions and nowhere to go? Most likely you are on the real estate highway, confused about which way the road will turn next. But there is cold comfort: you are in good company.

Experts who have driven the rough real estate ride for quite a long time are unsure too. Builders, bankers, consultants, brokers… everyone has an opinion different from the other. You hear warnings of an overheated real estate market from institutions as revered and trusted as HDFC and RBI.

You see interest rates on home loans climbing up after four years of drifting downwards and you see prices of houses defying logic—and gravity—in city after city. But then you also see new advertisements of betterthan- before and bigger-than-before housing projects. You hear of unprecedented flow of foreign investment in Indian real estate companies. And you hear real estate companies setting stock markets on fire by delivering up to 2,000% return in one year.

So what is the bigger picture? After being on a song in 2006, is the real estate market finally slowing down? And will this be a screeching, tyre-burning halt?

Let’s be honest: no one can predict with certainty which way home prices will go. In the past, almost everybody who tried to predict the direction of the housing market has been proved wrong. Too many real estate decisions have been pending on expectations of a price fall or rise depending on whether you are a buyer or seller respectively. Ask those who have been holding back the purchase decision, waiting for a crash, only to see prices soar higher. Or ask people who have sold their second homes in 2005 thinking a crash was imminent. 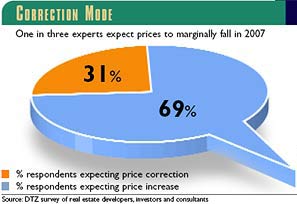 Not knowing the future isn’t the reason for indecision. People make fortunes in stock market, which is probably the most unpredictable of all financial markets. Some do so by luck. But most do it by knowing why they are buying a particular stock. A few thumb rules and adequate research is the trick. 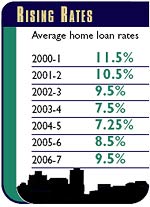 Real estate is no different. Good deals are to be found in all phases of the market. MONEY TODAY reached out to builders, financiers, consultants and financial analysts to tell you what is the best option now. Across various categories of buyers and their expectations, there are dos and don’ts that ensure you aren’t caught driving on the wrong side of the road.

Growth in real estate prices will certainly slow down significantly in 2007. Last year saw the sector grow by an impressive 30% which includes a regional variation of 75- 125% not counting the intra city variations. Price hikes overshot the growth in salaries.

“The price rise was the steepest between October 2005 and March 2006. We won’t see appreciation of this kind because even though demand is still buoyant, supply is even higher,” says Kumar Gera, chairman of CREDAI, an association of real estate developers. Rising interest rates, the fall in which was one of the biggest contributors to the real estate boom, will have a cooling effect too. “There has been a slowdown in the past 5-6 months but the rise in real estate prices has had a bigger impact than the rise in interest rates,” says Rajiv Sabharwal, senior general manger and head of retail assets, ICICI Bank.

Experts though believe that the impact of rising interest rates will be dulled by the expanding options in terms of location, type and price of accommodation. First time buyers are less likely to delay home buying than second time investors, which now contribute about 15% of total house purchases.

The worse hit will be speculators. In the past couple of years, riding on the boom, anyone who could pay 10-15% of the price of the property upfront booked multiple flats during the pre-launch of projects only to exit the same by selling them at much higher prices during or just before the formal launch. This led to artificial inflation in property prices. Some states have banned pre-launches. Besides, with the expected drop in prices, speculators are backing out in fear of getting stuck with property they bought only to get a quick buck.

Along the price points, superpremium housing may see a bigger correction. Says former CMD of Hudco, P.S. Rana: “Premium projects have been taken over by investors. If the real estate bubble bursts, it is the higher income strata which will be hit first.” Tier III cities like Bhiwadi, Palwal, Rudrapur, Bhatinda and Dera Bassi, the focus of some of this proliferation, are already seeing 20- 25% drop in prices in the past two quarters and speculative activity is also on the decline. “Against 15% speculators in 2005, we have only 8- 9% of them in our 2007 projects,” says Jackbastion Nazareth, executive director, Sobha Developers.

As and when the correction does happen, shops are expected to experience it first, followed by offices and residences. As HDFC Chairman Deepak Parekh points out in his column on page 36, there are 600 malls coming up in and around Delhi alone. Not all of them will be viable. Regionwise, the south and east will see a lower correction than the west and the north. But wide patterns and trends might not translate in the city or area you are living in. This is because the dynamics of real estate are influenced largely by local factors. For instance, announcement of a new metro line in a part of a city might increase property prices in that area compared to the rest.

Then there is simple demand supply balance. Cities such as Delhi and Bangalore have seen the launch of a large number of housing projects in the past couple of years. All that supply will hit the markets this year. A significant amount of demand in these areas in likely to be met by this influx, thereby halting the stratospheric rise in prices. “Gurgaon, Bangalore and Chennai could see a glut in some areas and hence a price correction in 2007. Residential property prices may fall by 10-30% in these over-supplied pockets,” says Ankur Srivastava, MD, DTZ Debenham Tie Leung. The same holds true even for commercial properties. In Delhi, against a best case absorption 10 million sq ft, the supply would be 15 million sq ft. “In certain markets office rentals may fall by as much as 40%,” warns Srivastava. But this isn’t to be construed as a wider crash. In many areas—in fact this is true for most locations—demand will outstrip supply. Prices in these areas will continue to rise, though at a slower pace. “Areas with emerging employment opportunities will definitely see above average growth. Areas where the supporting infrastructure is unable to keep pace with the population influx may lead to a flash point after which prices may fall,” says Gera.

Perhaps a vote for the long-term strength of the Indian real estate market is the unprecedented inflow of foreign investment into the sector— drawn partly by the relaxation of FDI norms. FDI in retail doubled between 2004-5 and 2005-6 and may more than double in 2006-7. The rapid growth of IT-ITeS and emergence of SEZs are also adding to the prospects of continued growth (see box Building on a Boom).

Even while contradicting signals flash, developers are gearing up to face any possible price correction through product and price innovations. Sanjay Chandra, managing director of Unitech, says, “Our customer base is down because of the recent spurt in prices. We are now looking at smaller apartment sizes to reach out to a larger consumer base.” The presence of national level developers has made it possible to offer alternative location options to consumers looking for the right fit of sizes and prices. Some developers are giving more value additions, such as fully or semi-furnished flats at the same cost, stripped down versions of flats or free parking or complimentary club membership.

Others are exploiting their tieups with banks to offer price innovations like loan melas. Banks have started giving 25-year loans, waiving pre-payment penalties and discounts on processing charges. As the speculation of a slowdown gains momentum, such innovations and customisation will gain momentum. Sanjay Verma, executive MD of Cushman & Wakefield says, “Lowbudget housing is a handsome chunk of the market waiting to be fully exploited. Low-frill accommodations will be the next big thing.”

So should you or should you not take the plunge? Well, if you are a first time buyer, there is no good or bad time. You need a home! Before investing carefully consider all location options. Second time buyers need to be very clear about the purpose of purchase. If you are looking at rental returns choose an area that has offices around or is a convenient commute. If you want capital appreciation, buy in suburbs and areas along highways.

Whatever type of buyer you may be, don’t look at realty for earning a quick buck. Hold the property for at least five years for good returns. “Buying at these levels will be speculation if your investment horizon is less than 3-5 years,” cautions financial planner Rohit Sarin.

Is this the right time to sell? Investment in Indian real estate is a good long-term bet, if local checks are done. The changing demographic profile, rising incomes, shrinking family sizes and increased urbanisation all point to a massive and sustained demand for housing.

So there might be pits on your real estate highway, but the road promises to take you to a highly rewarding destination. A few bumps on the way is no reason for you to change your route.