Indian banks may not be prepared to deal with the non-performing assets that are slowly but surely piling up. Is Indian banking’s own subprime crisis in the works? As of now, the good news is that banks still have time to clean up their acts and their balance sheets. Anand Adhikari goes into the details.The global financial crisisSo, where is the money?Panic grips Dalal StreetIs something wrong with ICICI Bank?Economy in eclipseWhen exotic turns toxicWall Street woes, India’s opportunityThe Rs 60,000-crore time bomb

Anand Adhikari
The originate-to-distribute model can leave lenders (banks) with weaker incentives to maintain strong underwriting standards. This system is not only a potential source of risk to the financial system but also raises concerns regarding consumer protection. B. Sambamurthy
Financial institutions originated loans that they then bundled into securities and sold to other investors. With hindsight, it is clear that this originate-to-distribute model suffered severe incentive problems—the originator had insufficient incentive to ensure the quality of the loans, since someone else ultimately held them.

The crisis in the US financial sector can be traced back to the originate-to-distribute (OTD) model—as opposed to originate-tohold (OTH)—that banks followed. Simply put, OTD allows banks to lend more (or originate more loans) without violating lending limits (as they distribute the loans rather than hold them). In essence, many of these US banks were issuing loans to customers without expanding their capital. These loans were packaged and sold to investors like hedge funds and pension funds. Once these loans were offloaded, there was, of course, room again to issue fresh loans. End-result? The subprime crisis as holders of the underlying assets (mortgage loans) defaulted once housing prices crashed. 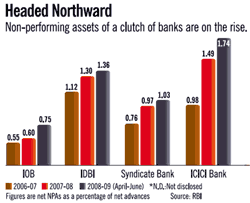 Click here to Enlarge
“The OTD model has failed miserably in the global marketplace,” agrees B. Sambamurthy, Chairman & Managing Director of the state-owned Corporation Bank. The 57-year-old veteran, whose banking career spans over three decades, isn’t perturbed by the fear and uncertainty around him. Reason? Corporation Bank, along with most other public sector banks (PSBs), has preferred the OTH model, where retail assets stay in the originating banks’ books. On the other hand, a few large private sector banks, along with the foreign banks, experimented with the global tools of securitisation to transfer retail assets (and also the risk that comes along with) from their book to other entities. The likes of Citi, ICICI Bank and Kotak in a way, were aping the global OTD model, although it never developed into a phenomenon due to several disincentives put in place by the Reserve Bank of India.

Still, that didn’t stop a clutch of banks—using both the OTD and OTH frameworks—from going all out to hawk loans to consumers (home loans, car loans, personal loans, education loans, loans for vacations et al). According to credit rating major, CRISIL, the retail finance industry recorded an unprecendented compounded annual growth rate of more than 30 per cent in the March 2003-07 period. The outstanding retail advances stood at Rs 6,00,000 crore as on March 2007. 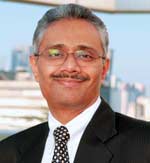 Paresh Sukthankar
Now for the bad news. The rating agency estimates that the proportion of gross non-performing assets (NPAs) to retail advances will rise to 4 per cent in March 2009, from 2.7 per cent in March 2007. Here’s why, in the words of the CEO of a small private sector bank: “Some banks were overaggressive on pricing and also extended credit to riskier classes like self-employed and high-risk customer in Tier II and Tier III cities.” The scramble to build a retail portfolio resulted in banks deviating from prudent lending practices. The loan to value (LTV, which is the loan amount as a percentage of the value of the property mortgaged) for mortgages increased from 85 per cent to as high as 100 per cent; and the installmentto-income (IIR) ratio also jumped from 30-35 per cent of income to a high of 60 per cent.

Clearly, inflationary pressures, coupled with rising interest rates, have shrunk the consumer’s wallet. As they end up spending more on household expenditure, they have less left over for payments of monthly installments. Whilst it may be too early yet to ring the alarm bells, what’s worrying is the repayment age getting extended to beyond 60 years. As Deepak Saruparia, Deputy Managing Director, Bank of Rajasthan, says: “The risk has increased in the system.” The bulk of the NPAs is distributed amongst a few large players.


Take, for instance, the country’s second largest bank, ICICI Bank, which saw a massive 78 per cent jump in its gross NPAs from Rs 3,114 crore in March 2007 to Rs 5,552 crore a year later. The breeding ground of NPAs clearly is the unsecured loan portfolio, where defaults are across the board in small-ticket size loans. Many banks have already put a stop on issuing such fresh loans. The next big danger spot where widespread defaults are expected is credit cards, a segment that banks wouldn’t want to exit as it is a lucrative one. What’s more, although two-wheeler and threewheeler financing on paper is considered secured lending, experts say it is not too different from unsecured lending, which explains why NPAs are on the higher side. As for home loans, margins are low, and bankers don’t consider them an attractive business any more.

The turmoil on Wall Street and the ensuing uncertainty have made a stringent control over asset quality the #1 priority for banks. Paresh Sukthankar, Executive Director, HDFC Bank, says: “We always try to balance our growth in terms of volume or market share with margin and asset quality.” 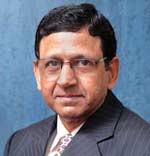 “We are extremely cautious in the unsecured loan segment, especially credit cards where we are reaching out to our existing borrowers,” says Sambamurthy. Corporation Bank has the lowest NPA amongst scheduled commercial banks, at just 0.32 per cent. 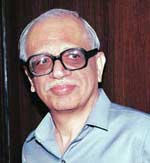 S.S. Tarapore
One crucial difference between the NPAs in the West and Indian bad loans is the role of directselling agents (DSAs) back home. Whilst the US banking debacle can be attributed solely to the OTD model, back home DSAs, too, have to carry the can for creating questionable and risky portfolios. But not everybody is willing to lay the blame squarely at the DSA’s doorstep. Says K.S. Sridhar, Chief Risk Officer, IndusInd Bank: “DSA as a model cannot be faulted for customer acquisition, but one should exercise due caution in using external collection agencies.”

Meanwhile, there may be another bubble building alongside retail—that of small & medium enterprises (SMEs). Such companies are under tremendous stress because of lower demand and higher interest rates. “Many are in the midst of expansion, which is two to three times their current capacity,” says an analyst.

S.S. Tarapore, a former Deputy Governor of the Reserve Bank, recently sounded the alarm bells when he warned that “the ground realities are that the Indian banking system is extremely vulnerable and nonperforming assets are going to pile up in the next few years”. The good news for banks is they still have time to clean up their acts, and their balance sheets.