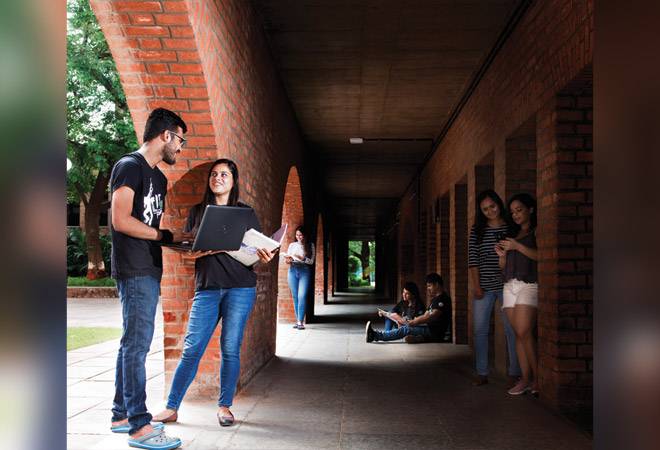 It is a mid-September Sunday morning when the director of one of the Indian Institutes of Management (IIMs) receives a call from a student from last year's batch. The former student (anonymity was requested) is worried; he and a few of his batchmates have been laid off, just five months into the new job they had landed through campus interviews. This IIM is among the dozen-odd that were launched during the past decade and had done well in the last placement season. The former student's predicament reveals three things. First, it could be an isolated incident and, therefore, cannot be generalised for this or other campuses. Second, no slowdown can be underestimated as it can colour recruiter sentiment in more ways than one. Third, and perhaps the most important point, is that a slowdown sentiment will hurt inadequately prepared companies the most, as with the one that laid off the young graduates. The company, a non-tech player, saw its growth plans come a cropper. Students who are in business schools (B-school) with the sole intent of landing a job at the end of the programme, the message is an unpleasant one.

There is clear evidence that these are troubled times for the economy and industry in India, and despite various announcements made by the government aimed at rebooting the growth engine, concerns remain. Therefore, when Business Today reached out to B-schools for this issue on the best management institutes in India, concerns over how the current year will pan out were inescapable.

The leading B-schools across India, however, remain strong, having posted good numbers on placements, job offers, salary offers and range of recruiters visiting their campuses.

There are some strong new trends, too, such as e-commerce emerging as a significant hirer, almost in the same league as long-time favourites consulting and FMCG. Demand in Management Development Programmes (MDPs) has changed to companies showing a preference for customised courses to suit their needs (read more about this in Custom Made, on page 48). At the same time, B-schools have realised that they have a lot of catching up to do in terms of improving their global perception score, and the need to deepen their presence in top global research journals like the UTdallas 24 and FT 50. For instance, between 2014 and 2018, other than Indian School of Business (ISB) and IIM-B, which have done better than others, most leading IIMs have had at best low single-digit presence in terms of number of papers appearing in these journals.

What may be worth noting is that the recruitment process last year concluded well before the talk of slowdown gained momentum. Speaking at the recent India Today Conclave on September 20, even Shaktikanta Das, the Governor of the Reserve Bank of India, said the central bank could see early signs of a slowdown only in February this year, by which time all leading B-schools, especially the IIMs, had concluded their placement process. 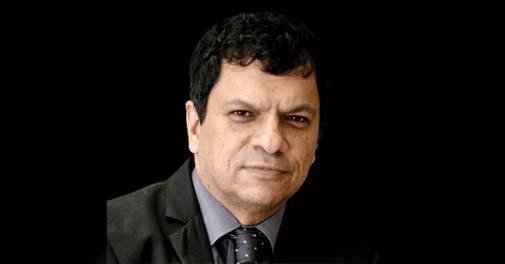 On the last final placements on campus, Errol D'Souza, Director, IIM-Ahmedabad, which retains its top spot this year, says: "The past year was good and we had more recruiters coming in. There was a more diversified base of recruiters. A lot of hiring is happening from the e-commerce space, which is new. It is not that they were not hiring earlier but what is new is that they are looking at management teams much more carefully." Traditionally, consulting, banking, finance and FMCG companies have attracted the most attention. "But now, e-commerce companies have inched their way into the top three segments for recruitment."

Explaining the reasons behind the trend, Deepti Varma, Director HR, India and MENA (Middle East and North Africa), Amazon, says, "Amazon is experiencing strong growth trajectory in India, fuelled by growth in the e-commerce business as well as the work that is going on in Amazon India development centres to support other business lines. To support this, we need to acquire the best talent available across MBA campuses in India. Amazon intends to hire even more students from business school campuses in India than the year before, which will help us fuel this growth and build a strong pipeline of future leaders." Varma adds that they look for students with leadership qualities, those who are innovative, flexible and delivery-oriented "in addition to having functional skills."

The interest levels from sectors were also similar, though e-commerce showed an increase, and banking, financial services and insurance (BFSI) saw a marginal decline. Consulting remained the top recruiter. In 2019, it made 136 offers (124 the previous year), BFSI, 53 (58), FMCG, 46 (43) and online services (largely e-commerce) 46 offers (38 the previous year).

IIM-Bangalore, which did not participate this year in the survey, also reported growth in 2019. Its lateral and final placements for the Post Graduate Programme in Management class of 2017-19 saw 488 offers, leading to all 411 students who appeared for placements being placed over the two interview days (in 2018, 420 students had received 462 offers from over 140 companies in India and abroad).

One of the reasons for strong recruitment numbers of top B-schools even during a slowdown is that these schools have few students while the demand is high, says D'Souza. "Our batch size is typically 430-445 students. The challenge is not getting a job but about the starting salary, which tends to be low in a downturn."

G. Raghuram, Director, IIM-B, concurs: "In so far as schools that are at the higher end of the spectrum, including the IIMs, I do not see problems because the number of people we produce is a small proportion when compared to the total need in the country. I have never seen slowdown affecting us at any time. The batch size for IIM-B is about 450. Taking the leading management schools, one would be talking of about 5,000 people. So, I do not see a slowdown affecting us. In fact, with all the stimulus measures being announced, there is a general positive outlook."

While recruitment may not get affected, salaries could see an impact. "There could perhaps be marginal changes in starting salaries. However, it should be noted that in 2008, when there was an international recession, many of those who were directly recruited for international jobs were affected when pink slips were given," adds Raghuram.

IIM-C's Director, Anju Seth, is equally confident. "We continue to have high demand for our students in all our programmes, including the flagship MBA programme (earlier PGDM)." For the placement of its fifty fourth MBA batch - the class of 2017-19 - the institute saw 125 recruiters (including 24 new names) making 501 offers for 442 students as against 130 recruiters with 479 offers for a class of 432 in the previous year.

Mumbai-based SP Jain Institute of Management and Research (SPJIMR) has a class size of 240 students. It not only concluded good final placements but even reported good numbers in its autumn placements, which ended as late as August 8, by which time the overall economic slowdown was evident.

What's common between the institute's autumn placements and the IIMs' summer placements (currently under way) is that they are a good early indicator of recruiter interest in the coming year. At SPJIMR, the flagship PGDM's 2020 class of 240 students (239 participated) saw 23 new recruiters with 13 per cent increase in average stipend over the previous year. Overall, there were more offers from the 69 companies that participated, which included BCG, HUL and Amazon. The early news from leading IIM campuses is also that the recruiter interest in summer placements is steady and there are some new recruiters too.

"On the whole, I do not see the top schools being affected but I think they will have to work harder for a similar outcome (as the last final placements). If they are complacent, it will hurt and they will all need to reach out to more recruiters and leverage their alumni networks," says Ranjan Banerjee, Dean, SPJIMR.

A lot can depend on the history of the management school, its relationship with the recruiters, and the batch size, especially for newer institutions.

"We may not have the legacy of an older IIM, but 'IIM' itself is a brand. Establishing a rapport with recruiters is crucial because we live in an era of networks and a lot depends on how you position the school in the eyes of the recruiters," says Bhimaraya Metri, Director, IIM Tiruchirappalli. For instance, he says, "our faculty members engage with companies where our students intern, so that we can come back and fine tune our content. These and other initiatives have helped. For example, our average salary package has been going up. It was Rs 14.91 lakh in the last placement, up from Rs 14.28 in the previous year. We have also been able to increase our batch size to 240, from 180 last year."

To be Future Ready

While Banerjee feels that the stimulus measures announced by the government will help, he adds that one needs to see how this "translates into investments and to what extent the consumer sentiment improves and consumer expenditures go up." So, a company that is not sure of its expansion plans may not invest towards it, which will affect B-schools. 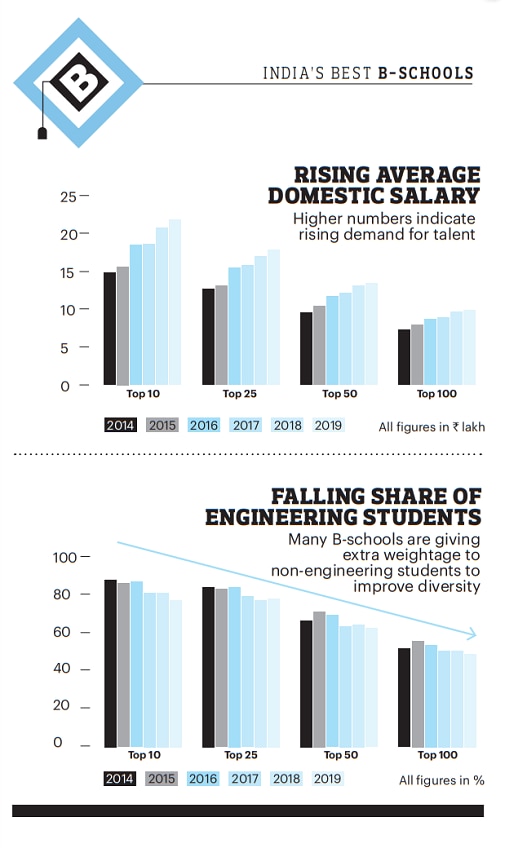 Should recruiter sentiment weaken, some of the new IIMs will have much more to worry about. There are 20 IIMs in the country now but the bulk of them have come up only over the past decade and do not have the legacy that the older campuses enjoy (see more on this in The Class Divide, on page 54). For instance, IIM Sirmaur, which started only in 2016, has a batch size of just 63 students. Their mean salary declined to Rs 9.2 lakh per annum (from Rs 12 lakh the previous year) and the highest slipped to Rs 16 lakh from Rs 32 lakh earlier.

B-schools are taking some steps to keep up with the changing scenario. One of the steps is to tap further into the alumni network. Another is to correct the gender balance (see Equal Class, on page 58).

B-schools are preparing students to stay ahead of the curve in the connected world of industry 4.0. Most address this through addition of new electives and more (see Ahead of the Curve, on page 42).

While the overall news is good, it is in the realm of cautious optimism as B-schools face new challenges. The All India Council for Technical Education (AICTE) website shows that management institutions continue to shut down. The BT study also points out that B-schools that have limited means to increase faculty strength and depth could find themselves in a difficult spot. Therefore, one needs to see how schools position themselves and if they are able to build niche strengths.