India has surplus agri produce this season. But fractured supply chain has hit harvesting, storing, transporting and selling. Here is how it is being worked upon 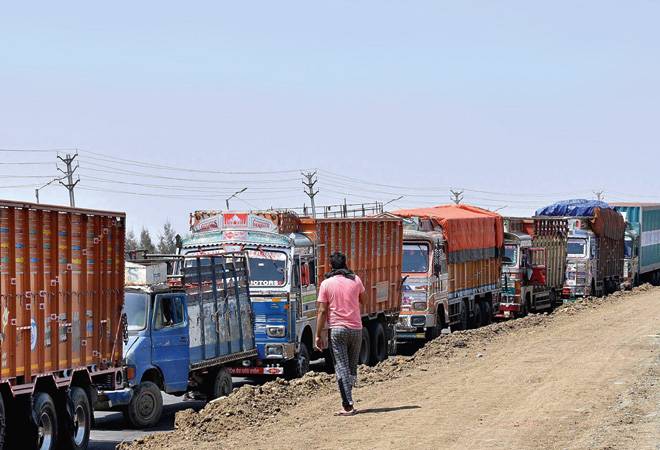 An average Indian consumer may not have faced any shortage of essential food items during the 21-day lockdown but a supply chain crisis is brewing in the Indian agriculture sector. Harvested food grains such as wheat have been stuck in fields in several states, and food grain aggregators, processors and branded processed food sellers are all facing problems in sourcing fresh stock.

The fact that even FMCG giant ITC is not immune to the disruption caused across the agricultural value chain, despite various agri-sector activities exempted from the lockdown, is an indicator of the seriousness of the problem. "Given the constraints of limited availability of transport and workforce, the end-to-end flow is still not seamless. Generally, the processing units - wheat mills, for example - run on low stocks in March because the supplies transit from one crop season to the next," says S. Sivakumar, who heads the agri and IT business of ITC. Making use of the exemption, ITC is now leveraging its institutional capabilities such as the e-Choupal ecosystem, to work directly with farmers to initiate purchases in several locations.

Others are also finding alternate methods to secure supplies. P.C. Mustafa, Co-founder of packaged food company iD Fresh Foods, says the company sourced rice from Tamil Nadu and pulses from Madhya Pradesh. "Though restrictions have been eased and movement of trucks has started, I am considering backward integration. This will not only allow better access but will also be more profitable as I won't need to depend on middle men," he says. 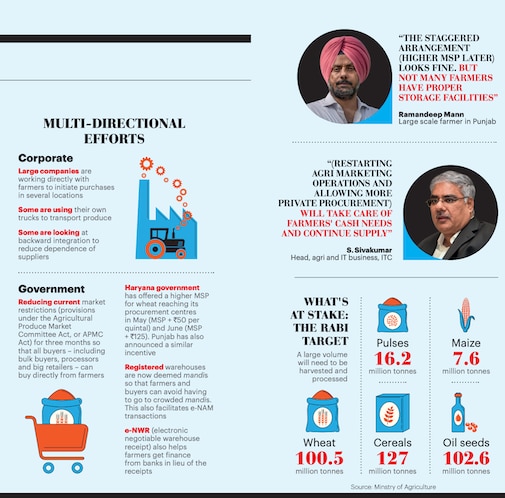 The other end of the problem is enabling harvesting and purchase of the crops. In fact, as you read this, Indias second major harvest season - the rabi harvest - would be in full flow. Wheat, pulses, soyabean and mustard crops are either standing in the field to be harvested or the bulk of whatever is harvested is waiting to be sold. In Gujarat, all harvesting is over. In Madhya Pradesh and Rajasthan, 70 per cent is done, and the stock is partly stored and partly in the fields. By April 15, major wheat growing states Haryana and Punjab would have been in the harvest mode. "Normally, 60 per cent of all food grains get sold in 60 days of harvesting. Less than one million tonnes of wheat and pulses have been traded so far, and we have over 100 million tonnes of food grain produce that is expected to arrive by June-end," an agri-industry expert says.

"No food processing company has an inventory beyond 15 days. We were expecting fresh stuff to arrive. Out of 2,000 mills of atta, 1,450 units (more than 60 per cent) are closed due to either labour shortage, or lack of raw materials. This includes around 150 mills of branded players; they also have an inventory crisis," he adds.

Shortage of labour is delaying harvesting; and shortage of trucks and closed mandis is making it impossible to transfer food grains to processing or packing centres. The end result is that stocks in retail outlets are depleted. Atul Garg, a rice exporter and managing director of Panipat-based GRM Overseas, says their factory is closed right now due to unavailability of packaging material, transportation, handling at port, and other supply chain issues.

In a recent note to investors, Sujan Hajra, chief economist of Anand Rathi Research, says rabi harvesting is behind schedule in many states and that there aren't adequate operational cold storage facilities. These, along with transportation hurdles and a sharp fall in demand, are resulting in wastage and distress sale of perishables such as milk, vegetables, fruit and animal products. "Unless these issues are addressed immediately, they could have a major negative impact on rural India and shortages of essentials across the country in the coming weeks," he states.

Arvind Mediratta, MD and CEO, Metro cash & Carry, says deliveries of commodities, vegetables and fruits was a big issue. "First it was the transportation challenge and then shortage of labour. We have now started sending our own trucks to pick up stocks."

Echoing the sense of panic is Pravesh Sharma, Co-Founder and CEO, Kamatan Farm Tech. "Our external partners, many of which are farmer producer organisations (FPOs), are panicking." He, however, adds that government intervention could help. Sharma wants the government to act fast by suspending all the current market restrictions (provisions under the Agricultural Produce Market Committee Act, or APMC Act). "Let anyone buy from the farmer - whether it's a corporate FPO or cooperatives. Anybody willing to give liquidity to the farmer should be allowed to go and buy," he says. "It's also a good opportunity to test mandi reforms; and revive the e-NAM (electronic national agriculture market) system," he says.

Sharma also wants the government to finance the supply chain. "At least 30 per cent of agri trade financing should be targeted at FPOs, cooperatives, self-help groups and rural small and medium enterprises," he says.

The government can also take steps to address the issue of labour supply, says Vijoo Krishnan, joint secretary, All India Kisan Sabha. "Usually, we say there shouldn't be labour displacement. But given the current situation, the minimum distance one is permitted to travel and the number of labourers one can hire can be set. Farmers should be given assistance to fetch harvesters and other machinery. Arrangements for mobile procurement should be in place. Cross-state movement should be facilitated for smooth transport of food grains and perishable items like vegetables and fresh fruits," Krishnan says.

The worries are not confined to logistics. Bulk of the wheat produced in India is procured by the Food Corporation of India at the central government declared price (MSP). This year, the government wants to delay procurement to avoid farmers rushing to harvest and sell and the resultant threat of coronavirus transmission. The Haryana government has offered a higher MSP for wheat reaching its procurement centres in May (MSP + Rs 50/quintal) and June (MSP + Rs 125). Punjab also has similar incentives.

"The issue is that the Central government is silent on the state government offers. Their stand has been to discourage any price above MSP. On paper, the staggered arrangement looks fine, but not many farmers have proper storage facilities. Also, will the states take the additional burden?" asks Ramandeep Mann, a large-scale farmer from Punjab.

The silver lining is that the Centre seems to be listening. It has already asked states to relax restrictive agriculture marketing norms. Registered warehouses are now deemed mandis to allow farmers to skip crowded mandis and facilitate e-NAM transactions. On April 4, the agriculture ministry asked state governments to allow bulk buyers, processors and big retailers to purchase agri-produce directly from farmers bypassing the established mandi systems for at least three months.

The directive is meant to achieve two objectives - decongest mandis, and allow farmers to sell at remunerative prices at their own doorstep by allowing aggregators to source directly from them.

In a letter to the states, the agriculture ministry suggested that they temporarily relax the monopoly of APMC markets by limiting their regulatory powers within the physical premises of such notified markets. The big buyers should be allowed to buy directly with minimum or no licensing or registration, the letter said.

Kapil Dev, EVP and head of business and products at commodity exchange NCDEX, says, the new arrangement should work well. "The government has now integrated e-NAM and e-NWR (electronic negotiable warehouse receipt). Farmers can reach out to the nearest warehouse, generate e-NWR and sell through e-NAM. That will avoid all farmers reaching mandis at one time. Farmers can plan, and even labour can be worked out," he says. The move will also help farmers discover the fair price for their produce as e-NAM bids happen at a national level. "e-NWR is also a negotiable instrument so farmers can get finance from banks" in lieu of the receipts, he added.

Big firms are working their way out. "We are working closely with authorities in different states and districts - who have been very supportive - to ensure that manufacturing and downstream supply chain activities continue uninterrupted, with heightened safety protocols. It's an evolving situation and (resumption of normalcy) will completely depend on when and how the lockdown gets lifted," ITC's Sivakumar says. Its important for states to design safer processes to operate mandis and restart agri marketing operations in a calibrated manner, as also to expand capacity by permitting more private procurement centres. "This will take care of farmers cash needs while ensuring their safety, and continue the supply to consumers," he adds.

But disturbing news continues to pour in from different parts of the country - onion prices crashing in Maharashtra, grape harvest thrown away as compost by some farmers in Karnataka, and more. The problems are far from over. A final solution will depend on how long it takes India to fight off the coronavirus pandemic.