Is the Rs 7,000-crore fraud that B. Ramalinga Raju resorted to an accounting scam—done to prop up valuations of the IT giant—or was the promoter siphoning out money from a fundamentally sound company? E. Kumar Sharma finds out.

In Q2, our revenue grew… on the back of a 4-per cent volume growth and rupee depreciation against the US dollar… We believe these factors will also enhance annual margin performance… I would like to emphasise that Satyam is leaving no stone unturned in our efforts to create a sound foundation for our future.

Note to investors from B. Ramalinga Raju, Founder & Chairman, Satyam Computer Services, when declaring the company’s results for the quarter ended September 2008

The balance sheet carries as of September 30, 2008 inflated (non-existent) cash and bank balances… The gap in the balance sheet has arisen purely on account of inflated profits over a period of last several years (limited only to Satyam stand-alone…)

Note from B. Ramalinga Raju to the Board of Directors of Satyam dated January 7, 2009 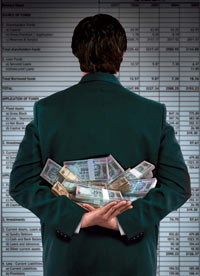 The Rs 7,000-crore fraud that B. Ramalinga Raju resorted to.
If it wasn’t a gigantic fraud, it would have been a colossal farce. But when nearly $2 billion of wealth that belonged to 3 lakh shareholders is eroded in a week; when the jobs of 53,000 employees are on the line; when shareholders’ net worth drops from a positive Rs 8,529 crore to a negative Rs 278 crore; when a company opens itself to multi-million dollar lawsuits; when a company’s founders are thrown in jail; and when its very survival is questioned, you wonder: What was Raju thinking; since when—and why—was he thinking this way; and how did he do it? Over the next few pages, BT attempts to unravel this massive fraud, which involves one business family, company auditors and, inevitably, an ensemble of politicians.

At first blush, Raju’s statement to the board in which he confesses to inflating profits appears a dignified act of contrition by a man who was willing to stand up and face the music for his transgressions. If Raju was dressing up the bottom line, it was only to boost the company’s valuation and ensure that it stayed in the big league of IT services. A higher valuation also enabled Raju to borrow more money against his shareholding. The founder of Satyam has been pledging the company’s shares for some time now, which has been largely responsible for the promoters’ holding shrinking from a chunky 26 per cent in 2001 to 3.6 per cent around the first week of January (lenders began to sell when share prices fell and Raju couldn’t pay up). And what was Raju doing with those borrowed funds? Ostensibly buying large tracts of land, most of it in Andhra Pradesh. 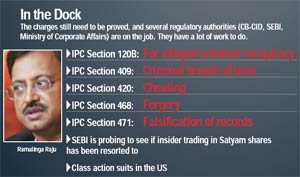 In recent years, the Rajus have amassed a land bank of an estimated 7,000 acres. A number of companies, including the Maytas twins, were floated for this purpose. The memorandum of association of just one such company, Bangar Agro-Farms, has this as one amongst its many main objects to be pursued: “To carry on in India or elsewhere, the business to deal in acquisition and development of agriculture lands, other lands, properties…”


Such intentions run across several of the Raju companies, where either his family members or those close or related to him have either interests or are directors. In fact, Satyam was the only IT company where promoters had an interest in real estate—an interest that kept increasing even as their stake in the IT services major kept reducing! Till 2001-02, Andhra ranked among the states in which real estate was the cheapest.

As land prices started rising because of the state government’s reformist pitch, the Rajus sniffed a bounty. Perhaps the patriarch saw an opportunity to create business for his two sons, who despite being well-educated, weren’t too keen on taking over the IT business.

“You have to understand that in a state like Andhra Pradesh, which used to have vast tracts of agricultural land, local people are bound to have a fascination for owning land,” says a former investment banker, who has worked closely with the Satyam founders.

What clearly did Raju in was the drop in share prices and in real estate, in tandem. Result? He had to buy more shares to avoid losing the earlier ones; by the end he lost most of them. Raju’s only hope lay in getting the asset-laden Maytas firms merged into Satyam. Ironically, when investors rubbished Raju’s proposal to merge these firms, they felt that he was attempting to strip Satyam off its cash (of $1.6 billion). Little did they know that he was trying to reconcile Satyam’s fictitious assets with real ones. Raju admits as much in his confession letter. But what he doesn’t say is whether Satyam’s balance sheet is threadbare because it was run ragged to build the real estate assets in the first place. That’s the Rs 7,000-crore question investigators will have to answer.

Struck by scams, stuck with stock