A, B and C are the cream. Can the new IIMs, like Shillong and the seven in the pipeline, ever be able to hold a candle to their illustrious peers?

There may be only one way to bell the CAT, but there are many more ways to skin it. A sharp mind soon figures out that preparation is the only way to score well in the Common Admission Test (CAT) of the Indian Institutes of Management (IIMs). However, in two years, by which time 14 IIMs—an addition of seven to the existing seven—are slated to begin offering courses, a high-ranker will have many more ways to pursue management education. It could be a choice between IIM Raipur, which is, perhaps, closer home, in Chhattisgarh, and the exotic Shillong IIM in Meghalaya; or again a choice between a second or third-rung IIM and a betterranked non-IIM school.

Welcome to a future that will also see stiff competition between IIMs for faculty; clamour for higher pay as private institutions poach from them; and even teachers using the lowerrung IIMs as a stepping stone to higher compensation. Life will become tougher for the deans and the directors at the IIMs as these institutes try to find their space in a three-tiered family with the institutes at Ahmedabad, Bangalore and Kolkata occupying the top three slots in this year’s BT-Nielsen study and the one at Lucknow—which is ranked at #6— stepping up the ladder.

The IIMs at Kozhikode and Indore (ranked #15 and #12, respectively) would qualify as the second tier. And the seven in the pipeline (Ranchi in Jharkhand; Rohtak in Haryana; Trichy in Tamil Nadu; Raipur in Chhattisgarh; Jammu in Jammu & Kashmir and also one each in Uttarakhand and Rajasthan) along with IIM Shillong, which started in 2007, constitute the third rung.

The Faculty Conundrum
R.C. Bhargava, who chaired the IIM Review Committee formed in 2007, which submitted a report last year, says that the biggest problem that the new IIMs will face is the shortage of faculty. “Forget new ones, even in the case of existing IIMs, all of them are running short of sanctioned faculty strength,” says Bhargava. Adds Ashoke K. Dutta, Director, IIM Shillong: “It is difficult to find good teachers who will stay at a location like this for long. They use this as a way of getting the IIM tag and then move away to a private institute with a better salary.”

One way to address the issue is use compensation to attract the best talent—from the world over. Says Pankaj Chandra, Director, IIM Bangalore: “For newer IIMs to flourish, we need to exponentially, and not just fractionally, increase the remuneration to the faculty.” He adds that IIM-B had no choice but to hire faculty from overseas. Out of 14 hired last year, 10 have PhDs from top American universities. There were others who showed interest, but could not be hired because of financial constraints. It is against a backdrop of such strain that older IIMs that have been asked to mentor the newer ones are stopping short of committing to share their faculty with the new institutes. So, how will an IIM Jammu or IIM Trichy be able to find quality faculty? Even though Lucknow is less than an hour away from Delhi by air, Sukumar Nandi, Dean (Planning and Development), IIM Lucknow, reckons that it often seems easier to find faculty for its extension campus at Noida than for Lucknow. If that’s the case, imagine the plight of Shillong.

Mentors or Plain Competition?
IIM-A has taken a stand that it will not be possible for it to share infrastructure or faculty as it is already strained. The view amongst other IIMs seems to be mixed. Says IIM Lucknow’s Nandi: “We do not allow our professors to teach a whole course outside the institute. That rule will not change even though we will be mentoring the IIM at Rohtak. We will see what arrangements can be made.” Saibal Chattopadhyay, Dean (Programme Initiatives), IIM Calcutta, which has to mentor IIM Ranchi, isn’t so sure. “Sharing of faculty has to be done, to start with, so that the new IIMs also get the general feeling of what quality education is like. This has to be done, but in a very intelligent, careful manner. We cannot be indiscriminately sending our faculty there because then our programmes will suffer.” Chandra of IIM-B, which will mentor the IIM coming up at Trichy, points out: “We do have some of our faculty visiting Trichy and helping them…. However, most of them are neck deep in their own classes and research, so it would not be feasible to share resources.”

Chattopadhyay explains that it is not fair to rank the IIMs in three categories; the three-tier structure almost corresponds to the number of years that an institute has been around. For instance, IIM-A and IIM-C were set up in the ’60s; Bangalore came up in 1974, points out Chattopadhyay. Yet, today IIM-B ranks amongst the elite, having overcome the 10-year handicap. “Everybody needs a level-playing field… today, it is not a level-playing field for IIM Shillong and the newer IIMs,” adds the IIM-C Dean.

The problem, however, might just be that in the past, IIMs were flagged off at the rate of almost one every decade. In sharp contrast, eight IIMs would have sprung up in a span of five years (the seven that have been proposed as well as IIM Shillong). For the new institutes to match up to their illustrious peers, it will take a long time and plenty of effort. Samir K. Barua, Director, IIM-A, says: “From the point of view of preserving the IIM brand, it would have been better had the government permitted existing IIMs to set up campuses in other locations. That would also have meant greater synergies between the old and the new institutions.” 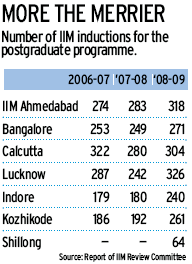 Consider, for instance, the role played by the IIM alumni in promoting their respective institutes. If IIM-A is #1, one of the factors contributing to that ranking is that almost two-thirds of India’s CEOs and functional leaders with an IIM degree are from IIM-A, according to a study by global CEO search firm EMA Partners. IIM-C accounts for a little over a fourth, with Bangalore and Lucknow accounting for the rest. What’s more, almost half of India’s CEOs and executives in strategic and business roles have attended either an IIT or an IIM; amongst these half have been to an IIM only; and another 15 per cent have been to an IIM after coming out of an IIT.

Brand IIM or Brand IIM-A
Clearly, the odds are stacked against the new IIMs. But that doesn’t mean they don’t deserve to exist; they could find their place in the sun—but later than sooner. “We must remember that it takes 15-20 years to build a strong brand like the three IIMs (A, B and C), which have worked hard to reach where they are today. The acronym IIM is a very strong tag, but there are several factors, including faculty, location, recruiters and research that help build the brand,” says Chandra of IIM-B. Chattopadhyay doesn’t believe that the new IIMs will dilute the quality of education: “Three lakh students appear for CAT. We accommodate 2,000-3,000 students in IIMs. Now, we will accommodate another 1,500. The new IIMs will get students of the same quality. They will still be at the very top as 99 percentile means 10,000.”

It’s a view that some find difficult to digest. K. Sudarshan, Managing Partner, EMA Partners, says: “The brand will surely be diluted. For at the end of the day, it is not pedagogy or methodology or curriculum that determines the quality of the brand. It’s mostly the input quality; and the students who come in to study at IIM-A are also the best of the best.” In fact, Sudarshan feels the IIM brand has already got diluted. “(That happened) after the ’90s when the honeymoon of IIM grads and the FMCG companies ended.”

Yet, the theory of brand dilution may just be a fig leaf to protect the elitist culture that prevails in the top-tier IIMs. “If there is brand dilution at the IIM level, then surely the individual institutes will work to strengthen their own brands,” says Prakash Iyer, CEO (Cards), Future Group, who is an IIM-A alumnus. “It takes 20 years and if a tree bears fruit only after 20 years, it doesn’t mean we stop planting trees. I don’t grudge the use of the IIM name by new institutes that are coming up.”

The global crisis that played out over the past one year may have done its bit to level the field somewhat by bringing down the superiority complex of the top IIMs by a few notches. Last year, a global team from one of the top investment banks was so upset by the attitude and swagger of the students and faculty at one of the top IIMs that they vowed never to return after the bank was treated rather shabbily at the placements. This happened just before the crisis on Wall Street erupted—evident from the fact that of these worthies all wanted to join a certain Lehman Brothers!

What they don't teach you at B-school