Farmers are finding newer ways, and means, to conduct transactions in times of lockdown 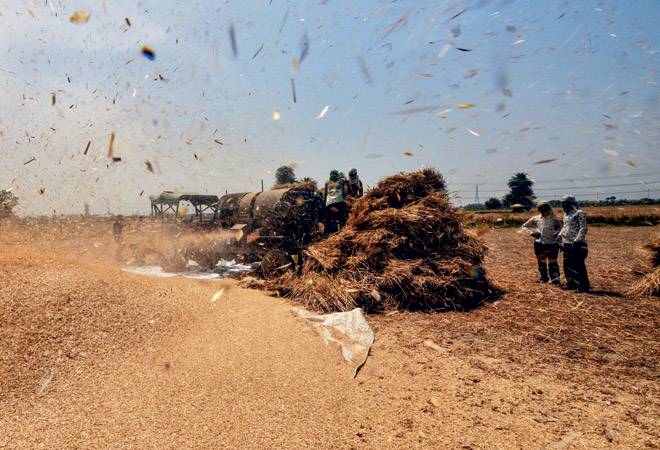 Ninjacart, a Bengaluru-based, tech-driven supply chain platform that connects over 20,000 vegetable and fruit farmers with 60,000 kirana stores and businesses across India, launched an initiative, Harvest the Farms, a few weeks ago. It helps farmers sell fruits and vegetables directly to customers. Ninjacart tied up with gated communities for bulk orders (at least 50 kg) and delivered at apartment gates. It entered into partnerships with food delivery platforms Swiggy and Zomato for last-mile connectivity.

The experiment is helping farmers in a big way. Farmers in areas where mandis are non-functional can route their perishable produce through Ninjacart. Vasudevan Chinnathambi, Co-Founder, says, "We have not thought about how we will work post-Covid but will look at how it pans out in terms of customer demand and feedback."

Ninjacart is not a one-off case. As mandis are shut in large parts of the country, farmers are accessing consumers directly. This in itself could well be the biggest change in Indian agriculture in decades. But even more interesting is the way several companies across the country are using the power of IT to determine where farmers are stuck with their produce so that they can be connected with transporters, consumers, and reach new and diverse markets. 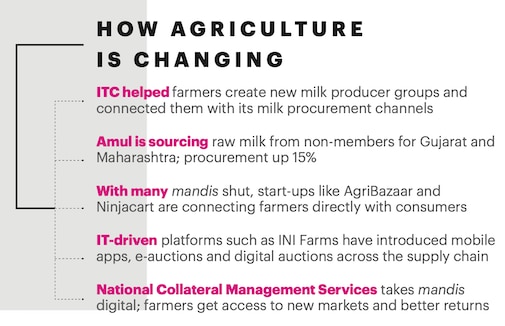 The Players Step In

Long time after Covid is over, some farmers in Bihar will remember this as a period that changed the way they conducted transactions. FMCG major ITC helped the farmers create new milk producer groups and connected them with the company's milk procurement channels. Whether it is milk, millet or wheat, ITC's raw material procurement is based on its long running philosophy of farmer connect. "ITC's agri business team responded to the situation by leveraging several elements of the ITC e-Choupal model in providing services to the farmer in procurement of crops and managing supply chains. Evolving iteratively over the past 20 years, the e-Choupal ecosystem has every conceivable component in its design, and all of them could be leveraged almost instantly, be it direct procurement from the farmers or app-based digital systems that monitor crops and deliver advisories etc," says S. Sivakumar, Group Head, Agri and IT Businesses, ITC Ltd. In fact, ITC leveraged farmer producer organisations (FPOs) for wheat procurement in UP, Bihar, Rajasthan and Madhya Pradesh. In millets, FPOs were supported with extension services for productivity improvement & capacity building in Andhra Pradesh. "Engagement with one FPO in fruit plantations for processing varieties and a pilot of fresh fruit marketing has also been initiated," says Shivkumar.

The lockdown threw up a unique problem for Gujarat Co-operative Milk Marketing Federation (GCMMF), which owns the Amul brand. It got requests from Gujarat and Maharashtra to procure milk even from farmers who were not its members as other systems had either stopped procurement or reduced it drastically. "We doubled milk procurement from nine lakh litres to 18 lakh litres a day in Maharashtra alone. Since the lockdown began, we have been procuring 35 lakh litres daily, 15 per cent more than usual," says R.S. Sodhi, Managing Director, Amul.

Pankaj Khandelwal, CMD of Mumbai-based INI Farms that connects pomegranate, orchid and banana farmers to large retail chains, says he has started a direct to home vertical in collaboration with Swiggy and Dunzo in major cities. The use of IT platforms for last-mile delivery is among the several initiatives businesses have taken to help both farmers and themselves. The others include using IT across the agriculture supply chain, mobile apps, e-auctions and digital payments, among others. 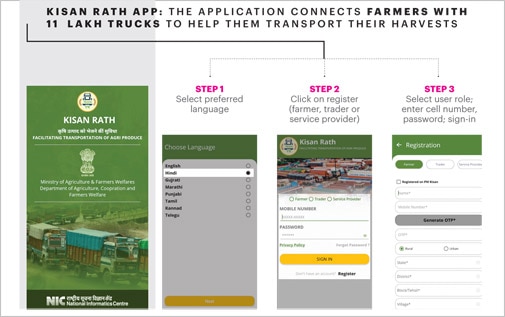 The biggest tech intervention has been made by the Central government itself. The 'Kisan Rath' app, launched by the agriculture ministry on April 17, is being seen as 'Uberisation' of logistics. The app connects farmers and traders with more than 11.37 lakh trucks and 2.3 lakh transporters and helps them identify the right mode of transportation for their produce. Within a week of its launch, 80,474 farmers and 70,581 traders got themselves registered on the app to find the right transportation for moving farm produce ranging from food grain (cereals, coarse cereals and pulses), fruits and vegetables, oil seeds, spices, flowers, bamboo, logs & minor forest produce, coconuts, etc.

"Kisan Rath is the best example of the use of IT for farming in Covid days. The idea is that farmers can contact the nearest truck available for transportation," says T.R. Kesavan, Chairman, National Committee on Agriculture of industry chamber Ficci and President and CEO of Tractor and Farm Equipment Ltd (TAFE). TAFE has announced a free tractor rental scheme through its tech-enabled J Farm Services (JFS) to help farmers in Tamil Nadu, Rajasthan and Uttar Pradesh during the cropping season. The company will use its corporate social responsibility funds to pay rent for tractors and implements hired by farmers using this scheme during the Covid disruption period. There are close to 8.5 lakh farmers on the JFS platform. 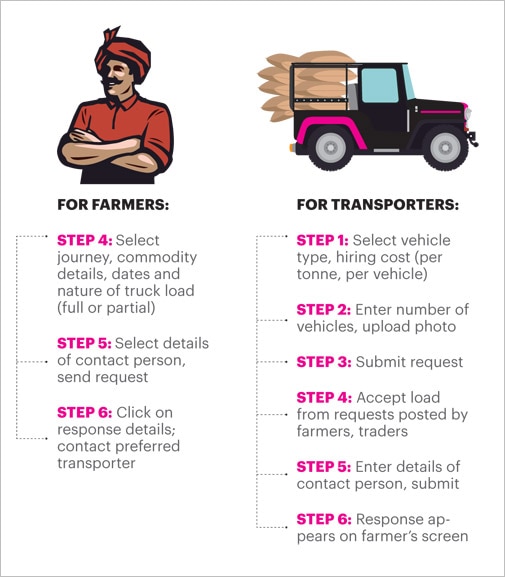 The e-market concept is also catching on among farmers. And its not just the government owned e-NAM (national agriculture market). Amit Agarwal, CEO and Co-Founder of Mumbai-based Agribazaar, a digital platform connecting local farmers to buyers, says there has been a surge in use of the platform after the lockdown. Agribazaar allows online sale of produce, transfer of money through its payment platform and linkage with logistics players. "In the last 20 days, we have transported more than 5,000 truckloads." It handles over 80 products, including foodgrain, oil seeds, pulses, fruits, potatoes, onions and garlic.

"Maharashtra farmers who normally sell their grapes and mangoes in Vashi market have used our platform to sell around 600 tonnes in Ludhiana, Bikaner and Kota. We also handled 80,000 tonnes of pulses," he says. Agarwal says their services have given farmers and buyers a cost advantage of 5-7 per cent. In fruits, this is in the range of 15 per cent. "Ours is a digital agri mandi. This will be a new era for agriculture. Why should a farmer go to the mandi when he can sell produce at the farm gate?" he asks. 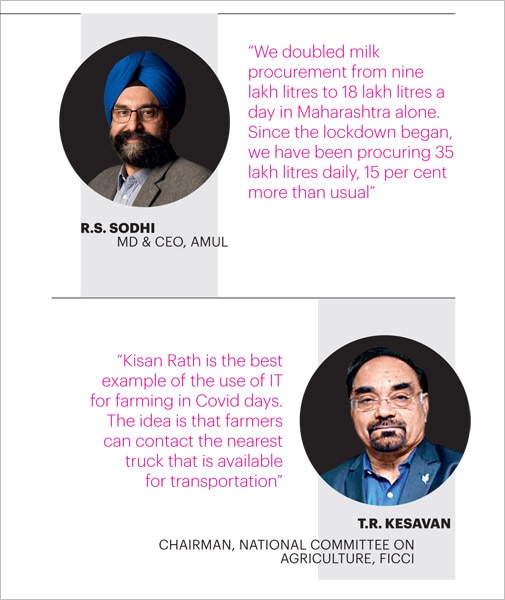 Siraj Choudhry, MD & CEO of National Collateral Management Services Ltd (NCML), is attempting a middle path. The company is connecting commission agents (arthiyas) in mandis with farmers through an e-mandi developed by NCML. "We are setting up e-market yards in warehouses with permission from state governments. This is mandi activity on a digital platform. It creates a marketplace, but unlike traditional mandis, the farmer does not have to stand in a queue. He can come at the time and location messaged on his phone. If he is not happy with the price, he can store the produce in the warehouse and the arthiya can get the receipt pledged in the bank for even some cash advance," says Choudhry. The central government has allowed farmers to bypass mandis during the Covid lockdown and sell directly, but NCML's plan is more realistic, as it takes traditional stakeholders on board while ensuring better prices for farmers and better quality of produce for customers. Choudhry feels that if the experiment succeeds in Rajasthan (for wheat), Andhra Pradesh (chillies) and Gujarat (jeera), it will transform the mandi system.

There are several other opportunities emerging in the lockdown. GCMMF is converting additional raw material into skimmed milk powder and white butter. This means all its factories are running at full capacity, resulting in incentives to labourers and drivers. "There is a 20 per cent to 50 per cent increase in incentives for them," says Sodhi.

Sodhi says Amul launched a new product - Haldi Milk - to cash in on the demand for immunity boosters. It also doubled brand building efforts. "We get a good bargain on advertisements and marketing," he adds.

Check on the Dragon