The Not So Happy Face of IT

Information technology majors are in the middle of a crisis like no other. With fear of muted-to-negative growth in FY21 due to the Covid-19 impact, they are pulling all stops to soften the blow
Rukmini Rao | Print Edition: May 17, 2020 Accenture Plc, a company with $43 billion in revenue and over 5,00,000 employees across the world, lowered its FY20 annual revenue guidance in March to 3-6 per cent from 6-8 per cent earlier, despite record order bookings of $14.2 billion in the second quarter (it follows the September-August calendar). The assessment of one of the world's largest tech companies of the impact of Covid-19 was an early indication of things to come. The prognosis was not far off the mark.

The Crisis And The Fallout

In the middle of March, the coronavirus death toll in the US was still below 400. Around the same time, even though infections in India were below 500, Centre decided to impose a nationwide lockdown to contain the spread of the pandemic. The domestic IT-BPM (business process management) industry, with 55 per cent share of the global outsourcing market, was forced to implement business continuity plans on a war footing, at a scale like never before, and that too within a few days.

By then, the biggest names in the industry had started showing signs of extraordinary stress. Just a couple of weeks after Accenture lowered its guidance, Cognizant became the first company to withdraw its annual guidance of 2-4 per cent growth for 2020. CEO Brian Humphries said even though the company had a strong start to the first quarter (it follows the January-December calendar), it was in March that macro challenges owing to Covid-19 got more pronounced. "Over the last few weeks, we have seen everything, from incremental opportunities that were not expected to the other extreme of project deferrals, request for furloughs (involuntary leave, either paid or unpaid, due to economic conditions), temporary rate concessions, deferred payment terms, and I don't think anybody can reliably predict how long this macroeconomic environment will persist," he added.

Among the homegrown IT companies, Bengaluru- headquartered Wipro was the first to announce its financial results for FY20. It said that the pandemic shaved off $14-16 million, or 0.7-0.8 per cent, in revenues in just a couple of weeks in the fourth quarter (Q4). Also, for the first time since its listing on the New York Stock Exchange in 2000, the company refrained from providing quarterly guidance due to the lack of visibility in disruption to its operations. "In March, as the Covid health crisis rapidly deteriorated in key markets like the US, Europe, the UK, and there was a lockdown in India, we clearly saw an accelerated impact to our business," Abid Neemuchwala, CEO, Wipro, said during the results announcement. "Given the uncertainty in the environment, and inability to predict the course of the health crisis, we have decided to temporarily suspend our practice of providing quarterly guidance," he added. Next was the country's largest software services exporter, Tata Consultancy Services (TCS), which reported its slowest annual revenue growth, a number similar to 2009/10, in a stark reminder of the global financial crisis. "The pandemic has introduced an unprecedented level of uncertainty in an already unstable global economy. All major economies have virtually ground to a halt. It is difficult to predict when and how the recovery might commence," CEO Rajesh Gopinathan said during the earnings call.

Infosys took an estimated hit of $30-$32 million in the fourth quarter due to the crisis and decided to deviate from its tradition of giving revenue guidance. "Given the uncertain environment with the global pandemic and planned business being marred by volatility, we do not feel it will be appropriate for us to provide guidance for this financial year," said Salil Parekh, CEO, Infosys, while announcing the Q4 numbers.

Industry body Nasscom, which pegged the IT services sector's revenue growth at 6-7 per cent to $97 billion, said it has still not assessed the impact of the pandemic. "Business for the tech industry will be impacted through demand-side shifts as opposed to any supply-side challenges," says Sangeeta Gupta, Senior Vice-President, Nasscom. "With reduced revenue and higher costs, companies can carry extra employees for a short while after which they may look at certain tough measures such as job and cost rationalisation and discretionary spends, so that the industry can continue to function without excessive financial burden," she adds.

According to IDC India, the full-blown impact in the India market will be evident by the middle of 2020. In its report, 'Covid-19 Impact: A Mix of Challenges and Opportunities for IT Vendors in India', Sharath Srinivasamurthy, Research Director, Enterprise Solutions and ICT (Information and Communications Technology) Practices, said: "We expect a slowdown in terms of discretionary IT spending, contract renewals and new deals getting signed as enterprises recalibrate cost structure in the coming months. Existing project executions have also taken a hit due to travel restrictions."

According to analysts, IT services companies could see their dollar revenues decline by 4-10 per cent in FY21. Nomura, in its research note on TCS, said: "We build a 4 per cent decline in USD revenues in FY21F, as we expect IT budgets to decline 5-10 per cent. However, we expect normalisation in FY22." With global IT budgets expected to decline by 5-10 per cent owing to the crisis, Nomura has said it estimates that Wipro's revenues will take a 9-10 per cent hit over FY21-22 due to the changed demand scenario. In its note on Infosys, HDFC Securities said it had factored in a dollar revenue decline of 2-5 per cent for FY21. Edelweiss Research said: "The current scenario clouds earnings visibility for all companies under our coverage, and we are cutting the target multiple by a modest 10 per cent from 20x to 18x for Infosys".

The companies have gone all out to mitigate the downside risks of the current crisis. TCS, for instance, had significantly off-shored work during the global financial crisis. This time, the focus is different. "The focus will be to actually get demand back, and to maintain the cost structure in a manner in which we are able to get to that," CEO Gopinathan had said during the earnings call.

Infosys, which announced a freeze on hiring and salary hikes, would continue to look at the entire gamut of other cost levers. "Our ongoing strategic cost optimisation levers around automation, pyramid rationalisation, on-site, offshore subcontractors will, of course, continue as in the earlier years," says Chief Financial Officer Nilanjan Roy. Wipro said it would go all out on controlling costs. 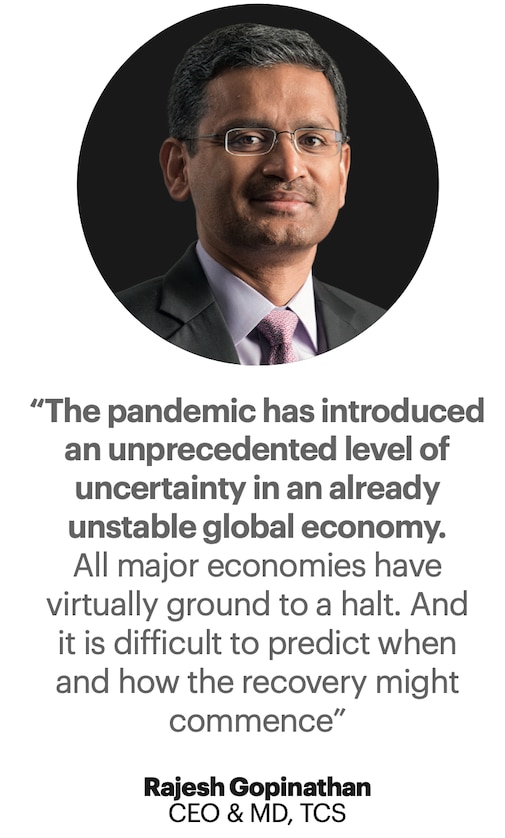 Two Mumbai-based analysts who did not wish to be named said the writing on the wall was clear -- that FY21 would be an aberration year for Indian IT companies in spite of closing strong order books. They also warned that the next quarter would be crucial to watch out for, to determine if revenue growth would hit the negative territory or not.

IT companies' workforce will now be seen from a different lens and the way business is conducted could change forever. "We see three key trends emerging - a digitally enabled workforce; ability to work without outside physical offices; and focus on technologies of the future (intelligent automation, machine learning, artificial intelligence, cyber security, analytics)," says Satya Easwaran, Partner and Leader, Technology, Media and Telecom, KPMG in India.

Over 90 per cent and in some cases around 95 per cent employees of IT services companies across the globe are currently working from home, an option never exercised at this scale till now by any company. In what can perhaps be an edge over other players for TCS, the execution of over 15,000 projects for 912 customers through new Location Independent Agile model or Secure Borderless Workspaces model in FY20 is bringing in some key learnings. "This is our new operating model and represents the future of work. It helps our employees enjoy a better quality of life, and helps organisations become more resilient, because the fully distributed nature of this model is inherently less risky and better suited for business continuity and agility," CEO Gopinathan said.

Pravin Rao, Chief Operating Officer, Infosys, said the new, agile workforce would be a positive outcome of the crisis. "But whether eventually the new normal means 20 per cent office and 80 per cent home, or whatever, I think only time will tell," he added. For companies, an agile workforce also brings in opportunities to further the cost-optimisation drive through virtual meetings and reduced capital expenditure for infrastructure and creation of new development centres and several other costs in running huge campuses.

Siddharth (Sid) Pai, Founder, Siana Capital and former President and Chief Strategy Officer of ISG Inc, thinks client spending will be under the microscope as businesses around the world retune themselves in a post-Covid market. "From a global demand standpoint, I think there is going to be a lot more scrutiny of what spend is discretionary, what is necessary, and what is nice to have," he says.

Industry experts see a silver lining in the crisis as companies look to invest more in automation, cyber security and digital interventions to operate in a post-coronavirus world. Deloitte, in a report, said even as challenges encountered in the immediate term would stabilise, "Due to enhanced remote work scenarios and extensive stack requirements, IT departments are expected to play a larger role in future business continuity plans, and will need help from service providers in procuring devices, setting up resilient, flexible and secure network, disaster recovery systems, IT security, etc."

Adds Nasscom's Gupta: "The crisis has forced businesses to re-imagine the future. We are optimistic that when we finally emerge from all of this, we would have leveraged technology in thousands of ways that may not have been conceivable earlier."

"Big Challenge is to Ensure Construction Starts at the Earliest"

No Exemption From Pain