Will re-introduction of lapsed bills be high on the agenda of the new government? On March 2, the President of India promulgated an ordinance to amend three laws to facilitate the use of the 12-digit unique identification number Aadhaar for purposes beyond delivery of social sector benefits to the country's citizens.

The Aadhaar and Other Laws (Amendment) Ordinance, 2019, was necessitated after a Bill by the same name lapsed without the approval of both Houses (it was passed by the Lok Sabha but not the Rajya Sabha) of Parliament after the last session of the 16th Lok Sabha (2014-19) came to a close last month.

The amendment was meant to undo a Supreme Court order restricting the use of Aadhaar. The ordinance ensured that these changes remain valid until the next government takes charge after the ongoing Lok Sabha elections and either re-introduces the Bill or dumps it.

The Bills that lapsed but were temporarily revived through ordinances are indicative of the government's preferences.

Gopal Krishna, Convener, Citizens Forum for Civil Liberties, a group that opposes the biometric-linked generation and use of Aadhaar, says the Aadhaar ordinance was clearly meant to undo the Supreme Court order restricting the use of Aadhaar.

The government, however, said that the Aadhaar and Other Laws (Amendment) Ordinance, 2019, which makes changes to the Aadhaar (Targeted Delivery of Financial and Other Subsidies, Benefits and Services) Act, 2016, the Indian Telegraph Act, 1885, and the Prevention of Money Laundering Act, 2002, would enable the Aadhaar issuing authority, the Unique Identification Authority of India, to create a more robust mechanism to serve public interest and stop the misuse of Aadhaar.

"I don't know how this will make investments in SEZs interesting. The sunset clause (to end all tax sops enjoyed by SEZs) is coming up in 11 months. The GST (goods and services tax) is a problem for everybody - developers, co-developers and units in SEZs - because despite (these entities) being zero rated, there is a legal hurdle as what is there in the GST Act has not been incorporated in the SEZ Act. If somebody is coming to set up a unit under a trust, he must be very bold," says Vinay Sharma, Officiating Chairman of the EPCES Export Promotion Council for EOUs & SEZs. A zero-rated good/service does not attract tax but is eligible for credits for the tax paid on inputs.  According to Sharma, the amendments may benefit some individual trusts but not impact others.

The Indian Medical Council (Amendment) Second Ordinance, 2019, has also failed to enthuse stakeholders. While the government says the ordinance has been promulgated to give continuity to the work already done by the Board of Governors as per the provisions of the earlier ordinance, the doctors are not happy with this route to supersede the Medical Council of India (MCI). KK Aggarwal, President, Heart Care Foundation of India, called it the "takeover of MCI, going on for several years". "Professionals have been opposing the Bill. They have been opposing any bureaucratic takeover of the autonomous body," he adds.

The Companies (Amendment) Second Ordinance, 2019, is, among other things, aimed at allowing certain companies with subsidiaries abroad to have a different financial year for consolidating accounts in India. The government calls it an "ease of doing business" measure. The ordinance also addresses the need to impose civil liability for technical and procedural defaults of a minor nature and to plug the corporate governance and enforcement framework through re-categorisation of 16 minor offences as civil defaults. This will de-clog special courts and transfer certain routine functions such as permitting conversion of a public company into a private company from the National Company Law Tribunal to the Central government.

The Banning of Unregulated Deposit Schemes Ordinance, 2019, criticised for its timing as it may impact the fund raising abilities of some political parties, is seen as a central legislation to tackle the menace of illicit deposits-taking activities in the country. The ordinance ensures a comprehensive ban on unregulated deposit-taking activity and its effective enforcement. "It aims to prevent such unregulated deposit schemes or arrangements at their inception and at the same time makes soliciting, inviting or accepting deposits pursuant to an unregulated deposited scheme a punishable offence," says the official explanation.

New Delhi-based think-tank PRS Legislative Research says the Narendra Modi government has shown a preference for enacting financial laws over its five-year term. It says 26 per cent Bills passed in the 16th Lok Sabha (2014-19) have been financial. This includes the GST Bill, the Insolvency and Bankruptcy Code Bill, the Insurance Amendment Bill and the Fugitive Economic Offenders Bill. 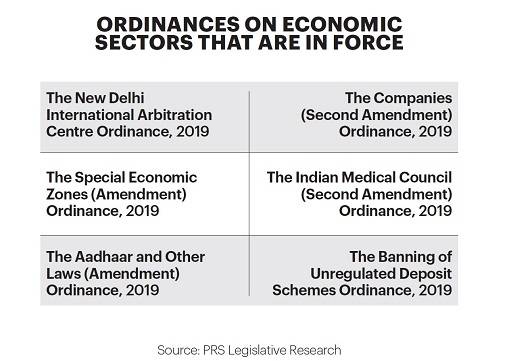 At least half a dozen Bills that were introduced in the Rajya Sabha, and hence pending despite the dissolution of the 16th Lok Sabha, may be introduced after the next government takes charge. These include the International Finance Centres Authority Bill, 2019.

All ordinances are valid for a maximum period of six months, though they will have to be considered in the very first session of the 17th Lok Sabha. The legislative process will be on predictable lines as the Narendra Modi government has got a fresh mandate in the general elections.