The decision to switch to the new income tax rates will depend on the level of deductions that you are able to use in the present regime
Naveen Kumar   New Delhi     Print Edition: February 23, 2020 Given the state of the economy, where consumption levels are declining, it was widely anticipated that the government would come up with some path-breaking initiatives that would leave more disposable income in hands of taxpayers and drive up consumption. However, Budget 2020 has not brought any substantial tax benefit to individual taxpayers, though there are many proposals that can benefit them. Here is a look at the most important proposals that will have an effect on your personal finance.

Income tax slab unchanged - If your gross income is above Rs 5 lakh and you have been using various exemptions and deductions like standard deduction, house rent allowance (HRA), leave travel allowance (LTA), home loan interest and principal, Section 80C investments and expenses, health insurance premium, National Pension System (NPS), and so on, to bring down your net taxable income substantially, the Budget may not have any new relief for you. New reduced tax rates have been announced but are applicable only if you forego all the deductions and exemptions.

This means if you have been taking deductions of Rs 3-4 lakh or more, there is hardly any reason for you to opt out of the existing tax slabs and switch to the new ones (See Table). 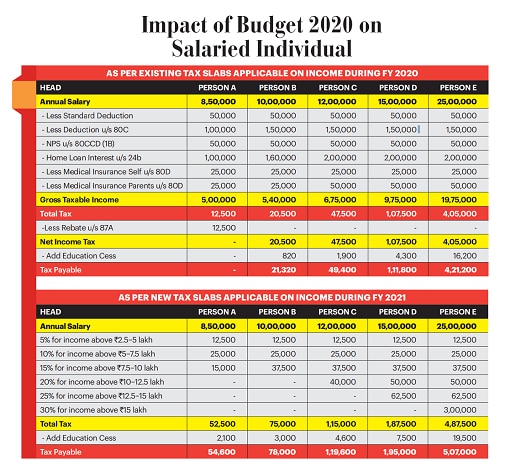 Option of reduced tax rate, but with trade-off - The Budget has introduced new reduced tax rates for incomes between Rs 5 lakh and Rs 15 lakh for those who do not use exemptions or deductions (see Quick Glance). "With the removal of several allowances such as LTA, HRA, perquisites, transport allowances, the income tax regime is no longer 'simplified' and taxpayers will have to choose between the two regimes and check which one is more beneficial," says Archit Gupta, Founder and CEO, Cleartax. "The optional instance will complicate it for taxpayers. Those committed to long-term investing or tax saving via 80C (through Sections 80C, 80D, etc) may put off decisions until they have seen the outcome of the options available to them," he adds.

Dividend distribution tax abolished for companies - While the Budget did not have clear announcements in favour of taxpayers, it did announce a move that will benefit retail equity investors - abolition of the dividend distribution tax (DDT). The tax was paid at the rate of 20.55 per cent, including education cess and surcharge, by companies while giving dividend to investors. But with no DDT to pay, companies will be more willing to share their profits with investors. Investors receiving dividend will, however, pay income tax on this income depending upon their tax slabs. This will be great for those whose tax slab is lower that the 20 per cent DDT rate, explains Gupta. "So, this is a welcome relief," he adds. For those in the higher tax bracket, "things may be more complex and they may require assistance with figuring out the tax due on dividends earned. It may also impact exit strategies for some," he adds.

Additional home loan deduction extended - To boost the flagging real estate sector, in Budget 2019, the government had introduced an additional deduction of Rs 1.5 lakh on home loan interest payment if you purchased a new house between April 1, 2019, and March 31 2020. The Budget has extended this by a year. What this means is that you can claim this deduction if you buy a new house between April 1, 2020, and March 31, 2021, and meet the eligibility conditions. This is in addition to the Rs 2 lakh deduction available under Section 24b. To be eligible for this additional deduction, the value of the house should not be more than Rs 45 lakh. You should also not hold any other house on the day the loan is sanctioned. "With houses bought by most first time buyers in the Rs 30-60 lakh range, and people buying these being in the Rs 10-25 lakh salary bracket, the biggest home buying segment is likely to increase the demand for affordable homes," says Sunil Mishra, Chief Executive Officer, TRESPECT, a B2C residential brokerage.

Enhanced protection on bank deposits - The recent crisis in PMC Bank, where many depositors were unable to withdraw their savings, brought forth the inadequacy of the deposit insurance cover of just Rs 1 lakh. This had remained unchanged since 1995. The Budget 2020 has addressed this by raising the insurance cover to Rs 5 lakh.

Retirement contribution by employer capped at Rs 7.5 lakh - Earlier, salaried employees who were in the highest income tax bracket had the flexibility to restructure their salary in such a way that the employer could make higher contribution towards Employees' Provident Fund (EPF), NPS or superannuation fund. But this year's Budget has limited the exemption on such contributions to Rs 7.5 lakh in a financial year. "Tax saving by optimising the salary structure using NPS and superannuation may no longer be valid given the proposal on a combined limit to employer contributions to provident fund, superannuation fund and NPS. The employers may have to revisit their compensation policies in view of the proposed amendment," says Sudhakar Sethuraman, Partner, Deloitte India. Relief to start-ups on ESOPs - To support start-ups in their talent retention efforts through employee stock options (ESOPs), the Budget has allowed tax deduction on these instruments to be deferred by five years. "In case of stock options issued by eligible start-up companies, it is proposed to defer tax deduction to the time of sale of shares or leaving of company or 48 months from the end of the relevant assessment year, whichever is earlier. This aims at protecting individual taxpayers from immediate tax outflow at the time of exercise of ESOPs despite holding the shares," says Sethuraman of Deloitte India.

NRIs to pay income tax on India income - The Budget took a step towards bringing in more NRIs into the country's tax net. As per the proposal, an Indian citizen who is not liable to pay tax in any other country or territory due to his domicile or residence or any other criteria of similar nature shall be deemed to be resident in India and, hence, liable to pay tax on his income in India. Explaining the objective behind the new NRI taxation provision, the Finance Bill states, "Tax laws should not encourage a situation where a person is not liable to tax in any country. The current rules governing tax residence make it possible for HNWIs and other individuals, who may be Indian citizens, to not be liable for tax anywhere in the world. Such a circumstance is certainly not desirable; particularly in the light of current development in the global tax environment where avenues for double non-taxation are being systematically closed." So, people who have gone abroad for employment and have not become a citizen of any other country may be required to pay tax on their income in India.

One must note that there are many NRIs who will not be affected by this new provision. "NRIs who are tax residents of the US and other countries having worldwide tax will certainly not be impacted by the above change. Even in case of countries which have territorial taxation such as Singapore or Hong Kong, this should not have application as the residents are subject to tax on their local income. However, this has once again brought to the forefront the meaning of the words 'liable to tax', particularly in cases where the countries, such as the UAE, do not impose personal tax," says Suresh Surana, Founder, RSM India, a consultancy firm. If you are an NRI and want to save on tax, then you have to take note of the number of days you stay in India. "It is also critical that individuals holding an Indian passport or persons of Indian origin regularly visiting India for various purposes should ensure that their stay in India is less than 120 days in any financial year as against 182 days earlier," says Surana.

Relief on selling property at corrected price - Over the last three years, the real estate sector has witnessed unprecedented correction and stagnation in property prices. However, there are many localities where the circle rate has not seen any revision or correction. As a result, the market value of the property is much less than the stipulated circle rate. The seller thus had to record the transaction at the circle rate, which was higher, and then pay higher stamp duty due to higher transaction value. In a move that would give relief to such property sellers, the Budget proposal allows them to sell their property and record the transaction at a value which is up to 10 per cent less than the corresponding circle rate.