Worsening NHAI finances are forcing the government to go back to the build-operate-transfer model for road projects
Ashutosh Kumar | Print Edition: May 2, 2021 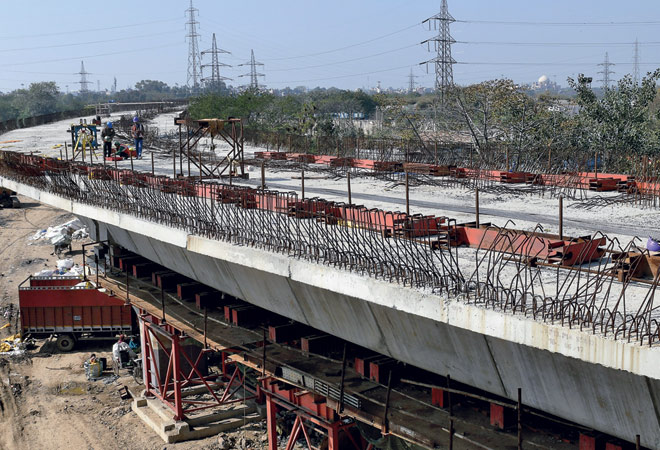 On February 10, the National Highways Authority of India's (NHAI's) project team eagerly awaited opening of bids for two projects - six-laning of the 67.75-kilometre Panagarh-Palsit and 63.8-kilometre Palsit-Dankuni stretches - in West Bengal. The excitement vanished soon after, because instead of bids, all they got were bid-related queries from developers. NHAI extended the bid submission deadline by two weeks. The story was no different and the deadline was postponed yet again.

However, when bids were opened yet again in early March, it was a jackpot for both NHAI and the Ministry of Road Transport and Highways (MORTH). Not only were there bids, private highway developers did not demand viability gap funding (VGF is a capital grant given by the government to a developer to bridge the viability gap in a highway project). Instead, developers were ready to pay a premium to the government for the projects. Palsit-Dankuni, requiring an investment of Rs 2,193 crore, was awarded to IRB Infrastructure in end-March and Adani Enterprises bagged the Rs 2,021-crore Palsit-Panagarh project in the first week of April.

A top official in MORTH told Business Today, "Adani Enterprises offered an upfront premium of 11.5 per cent of the capital cost for Palsit-Panagarh, while IRB offered 10.8 per cent for Palsit-Dankuni to NHAI." This means NHAI will get an upfront premium of about Rs 469.25 crore from the two projects. Premium or negative VGF is offered to the authority when the bidder finds that the project can fetch a positive return on investment even with an upfront payment to the government.

So, whats unique about these two projects?

Both were tendered under the build-operate-transfer or BoT (Toll) model of highway development after changes were made to the model concession agreement in August 2020 to incentivise the private sector to bid for the projects. The BoT (Toll) model has not been used widely for almost a decade as developers were not willing to take traffic and funding risks associated with highway projects. Under BoT (Toll), bids are awarded based on competitive bidding. The government awards concessions on the basis of VGF quoted by the developer. The government can grant VGF up to 40 per cent of the project cost, while the developer puts in the balance in the form of debt and equity. The ownership of the project remains with the developer throughout the concession period. The developer earns return on investment via toll collection. After the end of the concession period, the project is given back to the government and the private developers right to toll collection ceases.

On The Fast Lane, But?

NHAI says almost 96 per cent of projects tendered in 2011/12 were in the BoT (Toll) category. After 2012, highways development came to a grinding halt as developers were unwilling to take funding and traffic risks that the BoT (Toll) model posed due to policy paralysis, delays in land acquisition and other contractual issues. In fact, no BoT (Toll) projects came up for bidding in 2018/19 and 2019/20, while only three were awarded in 2017/18 - the Rs 1,576 crore, 109-km Solapur-Vijaypur stretch, which went to Malaysia's IJM Corporation Berhad, the 52-km Aurangabad-Karodi worth Rs 565.02 crore, bagged by L&T, and the 100-km Hapur bypass project worth Rs 2,650 crore taken by IRB Infrastructure. 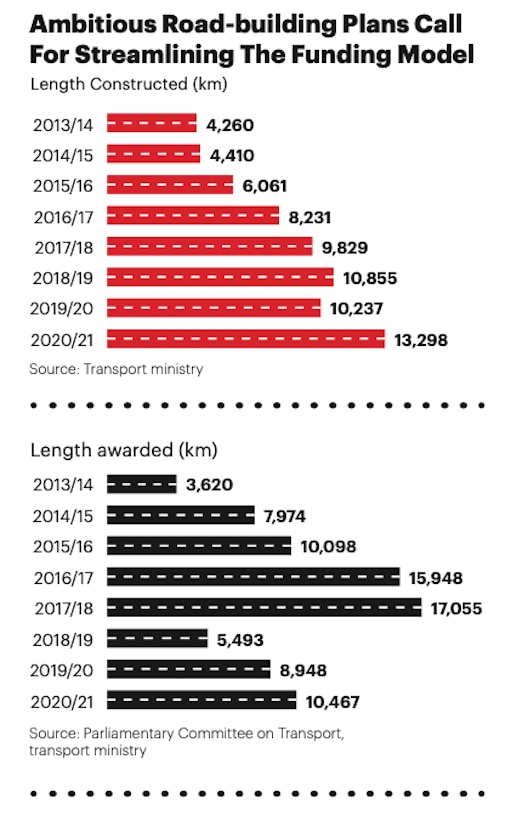 To kick-start the highway building programme, the BJP-led National Democratic Alliance (NDA) government relied heavily on the engineering procurement and construction (EPC) model and the hybrid annuity model (HAM). EPC model is a pure turnkey contract fully funded by the government. Under HAM, the government provides 40 per cent of project cost to the developer during the construction in eight equal instalments of 5 per cent, while the balance is paid in the form of annuity over the concession period. The annuity payment includes interest as well. The ownership of highways built on both HAM and EPC models remains with the government.

But, the government's focus on HAM and EPC projects to revive highway construction has turned out to be a double-edged sword. It has expedited highway development, but has also put pressure on government finances. In 2020/21, a total of 13,298 kilometres of highways were constructed at a record pace of 37 km per day. Terming it as a world record, Union Minister for MORTH, Nitin Gadkari had said on April 1, "Quality roads are being built. At present, projects worth Rs 6 lakh crore are under various stages of implementation. This year, we will build over 40 kilometres of highways every day."

However, this incremental award of EPC and HAM projects led to a 10-fold rise in NHAI's gross debt, from Rs 24,188 crore in 2014/15 to Rs 2,72,484 crore in November 2020. According to the report of the Parliamentary Standing Committee on Transport submitted in the Rajya Sabha on March 9, NHAI's debt-servicing liability for the three-year period between 2021 and 2024 is expected to be around Rs 97,115 crore.

Since both EPC and HAM have implications for NHAI and government finances, so there's an urgent need to revive BoT (Toll) projects, says Akshay Purkayastha, Director, Crisil Infrastructure Advisory.

Consider this. The government announced a Rs 5,35,000 crore umbrella highway development programme in 2017 - the Bharatmala project. Many national highway development programmes were subsumed in Bharatmala. The project's funding plan for the five-year period between 2017 and 2022 involved a PPP investment of Rs 1,06,000 crore. According to the standing committee report, only 210 km of projects worth Rs 3,717 crore have been done based on the PPP model since 2018. "The debt-servicing liability of NHAI for the next three financial years is higher than the estimates that the ministry had provided to the committee during its examination of demands for grants (2020/21)," the report said. "The committee recommends that NHAI may prioritise the completion of its delayed 27 road projects to prevent further cost escalation. It also recommends that NHAI explore restructuring of its debt and prepare proposals to raise long-term funds through the upcoming Development Financial Institution announced in the Budget."

More BoT (Toll) projects are in the pipeline. MORTH Secretary Giridhar Aramane told Business Today, "Bids for BoT (Toll) and HAM projects worth Rs 30,000 crore will be issued in FY22. The exact number and value of both projects to be tendered next year will be finalised by April end."

The two Bengal projects show an appetite for the BoT (Toll) model, says Aramane. "There is a general sense of euphoria around such projects. We have received a premium during the tendering of both projects recently. We will hold more industry consultations to further understand the needs of the sector."

Apart from a bundle of BoT (Toll) and HAM-based highway tenders, the ministry also plans to seek private sector participation in various other forms. These include asset monetisation, toll operate and transfer (ToT) projects, infrastructure investment trusts (InvIT) and securitisation of highways. It will soon come up with the details.

Amendments to the concession agreement by MORTH last year have also contributed to renewed interest of the private sector towards these projects. According to the new agreement, revenue potential of a project will be revised every five years during the concession period against the earlier 10. Additionally, the concession period will be reworked in accordance with the change in traffic. The ministry has also set up a sub-group with members from NHAI and the industry to deliberate upon further measures that need to be taken to de-risk PPP highway projects.

Industry and experts believe with changes in the concession agreement and a low interest rate regime, taking risks for higher returns on investments makes sense. However, concerns remain on viability of the projects.

Sudhir Hoshing, Joint MD, IRB Infrastructure Developers, says, "A major positive is that concession provisions have been aligned with cash flow needs of developers. If the project is viable, developers, banks and financial institutions will be interested in participating in the project."

"Lots of projects were awarded under the BoT (Toll) model between 2009/10 and 2012/13. Lots of things did not go right on both financing and construction fronts. Projects were not prepared properly in terms of detailed project reports, there were problems in environmental clearances and revenue was lower than estimated... The entire road sector came to a grinding halt," says Crisil's Purkayastha.

The government will have to carefully choose the packages in the revised concession agreement, he adds. "A highway with high density traffic will only be financially viable. There are many factors, but one should be attentive to traffic profile before issuing toll bids for a particular stretch."

It remains to be seen whether the euphoria over BoT (Toll) projects sustains in the longer term.

Quest to Be the World's Factory