The economy has been going through a phase of stagflation. Here is what this means In November 2019, former Prime Minister Manmohan Singh had, probably for the first time, raised the possibility of India facing stagflation. In a column, the former prime minister, also a renowned economist, wrote: "Continued increase in inflation combined with stagnant demand and high unemployment will lead to what economists term as 'stagflation', a dangerous territory from which it becomes very hard for large economies to recover."

Not many had taken his warning seriously. Retail inflation in the previous month was below 5 per cent and despite less than 5 per cent GDP growth in the September 2019 quarter, no one was ready to believe that the economy was facing anything resembling stagflation - in fact, many felt India was facing disinflation as retail inflation was in the 3-4 per cent range and wholesale inflation was just above zero.

But Singh's words proved to be prophetic when retail price inflation hit a five-year high of 7.35 per cent in December 2019. Still, most economists and analysts were sure that such high levels of inflation would not sustain even in the immediate term. They expected Consumer Price Index (CPI) inflation to 'correct sharply' in January and February 2020. For instance, Aditi Nayar, Principal Economist of ICRA Ltd, said, "Even though we expect headline CPI inflation to correct sharply in January 2020 and further in February 2020, it is expected to remain sticky above 4.3 per cent in the next few quarters." 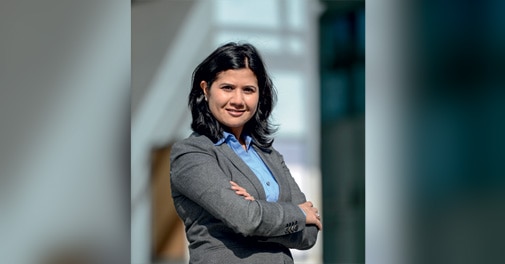 However, CPI inflation rose further to 7.59 per cent in January, before falling a bit to 6.58 per cent in February and 5.84 per cent in March. In the January-March quarter, it was 6.67 per cent instead of what Nayar had predicted.

And this high inflation was accompanied by falling GDP growth, which dipped below 5 per cent (4.42 per cent) in July-September 2019 itself, without showing any sign of trend reversal. The unemployment rate crossed 7.5 per cent around the same time.

So, the economy was seeing slow GDP growth, accompanied by high inflation and unemployment rates, or stagflation, way before the pandemic stuck. The question is - how seriously is India caught in the quagmire and how are things likely to pan out in the coming quarters. Are all pieces of the stagflation jigsaw puzzle in place?

"Number-wise, definitely yes," says Siddartha Sanyal, Chief Economist and Head of Research, Bandhan Bank. He goes on to introduce a new term called Conflation as GDP is not stagnant but in contraction mode.

In the Monetary Policy Committee meeting of the RBI in August also, Ravindra H. Dholakia, a member, made this observation: "These high inflation points coupled with apprehensions about GDP growth likely to be negative both in real terms and nominal terms imply that the economy is not caught up in recession with deflation but in a deep stagflation, which occurs when the adverse supply shock is more severe than the demand shock." The last piece of the stagflation jigsaw puzzle is persistency. Typically, stagflation means a long period of high inflation with economic stagnation. Is this likely to be the case with India?

Most economic research firms and rating agencies predict 10-12 per cent GDP contraction in FY21. With growth unlikely to come back in a hurry, inflation trajectory will decide the period India remains under the damaging influence of stagflation. The RBI, in its monetary policy statement on August 6, had predicted that headline inflation may remain high in second quarter of FY21 but moderate in second half of the financial year.

But it is anybody's guess when inflation will fall below 6 per cent. Most experts Business Today talked to were of the view that CPI inflation may fall below 6 per cent before next calendar year. "We believe this 6.5-7 per cent number is on the higher side, but this is a transitory phase. This will remain for, maybe, next two to three months because of disruption we have seen in the economy. It will come down after that but remain in the 4-6 per cent range, even on the higher side of the range, may be around 5-6 per cent," says Rana Gupta, Senior Portfolio Manager, Asia (ex-Japan) Equity, Manulife Investment Management.

Fall in food prices alone may not help even though food and beverages have 46 per cent weightage in CPI. This is because services such as transport, communications and health have 28 per cent weightage and supply disruption in these areas can keep inflation at elevated levels. "Transport and communication and miscellaneous products continued to witness double-digit inflation in August 2020. Supply disruptions are still having an impact on CPI inflation and core inflation jumped to a 22-week high of 5.77 per cent in August. Unless supply disruptions are addressed, it is unlikely that base effect alone will arrest retail inflation," says Sunil Kumar Sinha, Principal Economist, India Ratings.

The risk of a second Covid-19 wave could also keep inflation high. "There is a risk that in the current situation, if rising infections force further extension of localised lockdowns, supply disruptions could worsen, preventing a fall in inflation and recovery in output. This could result in a stagflation-like situation," says Aditi Nayar of ICRA.

But some experts believe that the demand slump, given higher unemployment and lower wage growth, will ensure that high inflation does not sustain for a long time. They say inflation fuelled by supply-side constraints will be negated by slump in demand in the medium term.

Sreejith Balasubramanian, India Economist at IDFC AMC, points at demand collapse due to slow growth given that there is every reason to expect higher unemployment and lower wage growth. He says we are seeing supply-side inflation induced by response to the health crisis in the form of lockdowns and not due to, say, a sharp fundamentally driven rise in oil prices.

Even if experts and economists do not agree fully, numbers and statistics say that we are in a phase of stagflation. The only question now is, how long will this last and what damage can it do to the economy and businesses at large?