As India is going through the second wave of Covid-19 infections, so are fears of uncertainty and gloom. But the consistent improvement in gross domestic product (GDP) numbers over the past year is playing a key role in shaping up sentiments of corporate India, as highlighted in the latest Business Confidence Index (BCI) survey.

On a scale of 100, BCI jumped to 45.5 in the January-March period compared to 43.8 in the previous quarter and 48.2 in the quarter before that. Market research agency C fore quizzed 500 CEOs and chief financial officers across 12 cities for the survey.

Sujan Hajra, Chief Economist at Anand Rathi Securities, says the biggest reason for the boost in sentiment is GDP growth. "The economy has done well quarter after quarter," he says. GDP declined sharply by 23.9 per cent in April-June 2020. In the next quarter, the contraction was lower, at 7.5 per cent. This was followed by 0.4 per cent growth in the third quarter. Estimates peg fourth quarter growth at 2-3 per cent. 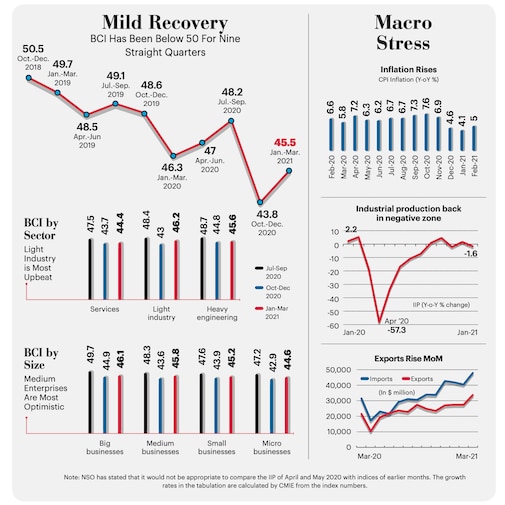 The optimism, say experts, is also driven by the fact that most large institutions have given lofty growth projections for FY22. "Institutions like IMF, HSBC and RBI have pegged GDP growth for FY22 at 10.5-12.5 per cent. It's safe to assume that they have taken into account the possible risk factors into their projections," says Sanjay Kumar, partner at Deloitte India.

The latest survey shows that the respondents were optimistic about nearly all parameters in January-March quarter as compared to the previous quarter (October-December). Take overall economic conditions. On a scale of 1 to 10, they gave a rating of 5 against 4.5 in the previous survey. Similarly, they were more confident about other parameters like financial situation (5.1 in latest survey versus 4.3 last time), demand conditions (5.2 versus 4.2), hiring conditions (4.7 versus 4.1) and profit margins (4.9 versus 4.5).

The survey highlights that 57 per cent respondents expect the second wave of Covid to affect their businesses for a quarter, and another 22 per cent expect the pain to last for 6-12 months. Economists say despite concerns around the second wave of Covid-19, and the general belief that it could undo some economic gains of the past few quarters, the impact is going to be different on each sector this time. 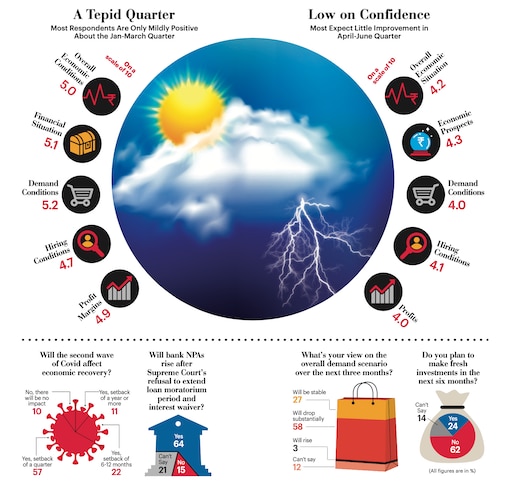 "Recent mobility restrictions imposed in Mumbai, Delhi and Pune in the wake of rising Covid-19 cases may affect some services sectors, particularly the hospitality and transportation segments. With, of course, a caveat that this time it will, hopefully, not be a complete lockdown like last year. Within the services sector, IT and ITeS, which has large investments and has created a number of jobs, is likely to do reasonably well, and may hold onto its regular profit margins. Manufacturing sector, on the other hand, is seen to be having PMI [Purchasing Managers Index] higher than 50, though it dipped recently by two points or so. But on the whole, this still shows a better business sentiment," says Deloitte India's Kumar.

Contrary to the upbeat mood in the January-March quarter, the outlook for April-June has deteriorated. For example, in four out of five parameters - economic prospects of the business, overall economic situation, demand conditions and profits - respondents have given lower ratings than the previous survey. In hiring conditions, though, the rating has been the same as before (4.1 on a scale of 1 to 10).

As per the survey, 64 per cent respondents expect non-performing assets to rise after the Supreme Court's refusal to extend the loan moratorium period. In order to overcome the pandemic-induced slowdown, RBI had announced a loan moratorium scheme from March to August last year. Experts say it's an obvious response from corporates. "Companies don't want to pay but for how long can loan moratorium and interest waiver be given? Banks have the responsibility to pay depositors. If the debt is not repaid, it will ultimately fall on banks," says economic expert.

The survey shows 62 per cent respondents don't plan to make fresh investments in the next six months while 58 per cent expect overall demand to drop substantially over the next three months. This is quite contrary to the ground realities. How?

A few corporate leaders Business Today spoke with said that both urban and rural demand is looking up. Rural demand is going to be better on account of good rabi (winter) crop and additional allocation of Rs 40,000 crore towards the Mahatma Gandhi National Rural Employment Guarantee Scheme in the stimulus package last year. "Urban demand has been good too. GST (goods and service tax) collection touched an all-time high of Rs 1.24 lakh crore in March 2021 on the basis of higher consumption. Nonetheless, it's important that demand stays robust," says an economist.

As a supplement to the survey, we do an assessment of other economic indicators. These include export-import, index of industrial production (IIP) and consumer price inflation (CPI). After the recovery in industrial output indicator IIP during September-October 2020, the index slipped back into the negative zone. It has been negative in two out of last three months. Retail inflation (CPI) continues to remain low at 5 per cent in February 2021 - below the RBI's upper limit of 6 per cent. Exports registered a sharp rise of 58 per cent (year-on-year) and touched the highest-ever monthly figure of $34 billion in March while imports jumped 53 per cent to $48 billion in the same month.

With the spectre of a second wave looming large, perceptions have turned slightly negative over the past few weeks. This might take up a lot of mental space of corporate leaders - affecting sentiments - rather than causing any material harm to their businesses.