Here's How the Global Economic Headwinds are Impacting India

The global economy is facing headwinds beyond its control. This poses serious challenges for India

The global economy is facing headwinds beyond its control. This poses serious challenges for India. (Illustration: Nilanjan Das)

Ten years ago, three words uttered by then European Central Bank (ECB) President Mario Draghi—“whatever it takes”—marked the beginning of the turnaround of the Euro zone debt crisis of 2012. Who knew then that Draghi’s words to save the economy would become a buzzword? Today, in the context of soaring inflation, dampening growth, and clouds of slowdown hovering over developed and developing economies, Draghi’s call of 2012 seems more globally relevant than ever. To combat economic woes on multiple fronts, all are scrambling to foster growth, tame inflation and revive sagging economies. Amid volatility in oil prices and commodities causing inflationary pressures, the Indian central bank and government have their task cut out: tame galloping inflation and foster growth.

This May, India’s retail inflation eased to 7.04 per cent from a near eight-year high of 7.79 per cent recorded in April. But that’s no cause for joy. Since January 2022, retail inflation breached the Reserve Bank of India’s (RBI) inflation tolerance limit of 6 per cent for the fifth successive month. Swinging into action, the RBI hiked the repo rate by 90 bps to 4.9 per cent in the past one month. Indeed, all central banks are sprinting to hike rates, tame inflation, and push growth. In a bid to curb the 40-year-high inflation in the US, the Fed recently hiked the interest rate by 75 bps. The ECB, too, is looking to raise rates for the first time in the last 11 years.

India’s former chief statistician Pronab Sen believes that as far as growth is concerned, much will depend on how aggressively the RBI tightens the monetary policy. “I would imagine the impact of the Monetary Policy Committee would be huge. So, I think GDP growth for FY23 is not [going to be] more than 6.5 per cent with the downside risks,” he says. “If, in the next policy meeting, the RBI says they are taking [repo rate] up to 5.4 per cent and, two months later, to 6 per cent, then this kind of aggressive monetary policy will lead to the collapse of demand in the economy, and impact growth.” However, N.R. Bhanumurthy, Vice Chancellor of the Dr. B.R. Ambedkar School of Economics University, disagrees with Sen. “During and after the global financial crisis, we have seen how baby-step monetary policies have led to higher inflation and, at the same time, led to slowdown in GDP growth. India had a terrible monetary policy in 2011-12, which led to double-digit inflation for almost two consecutive years.” Culling out anecdotal evidence from the past to support his stance, Bhanumurthy mentions how Paul Volcker, the Fed Chair during 1979-1987, increased interest rates by 1,200 basis points in 1980 to control inflation in the US. “That means a 12 percentage points hike by Volcker was carried out to address inflation expectations in the US, and this shock did end the inflation,” he says. 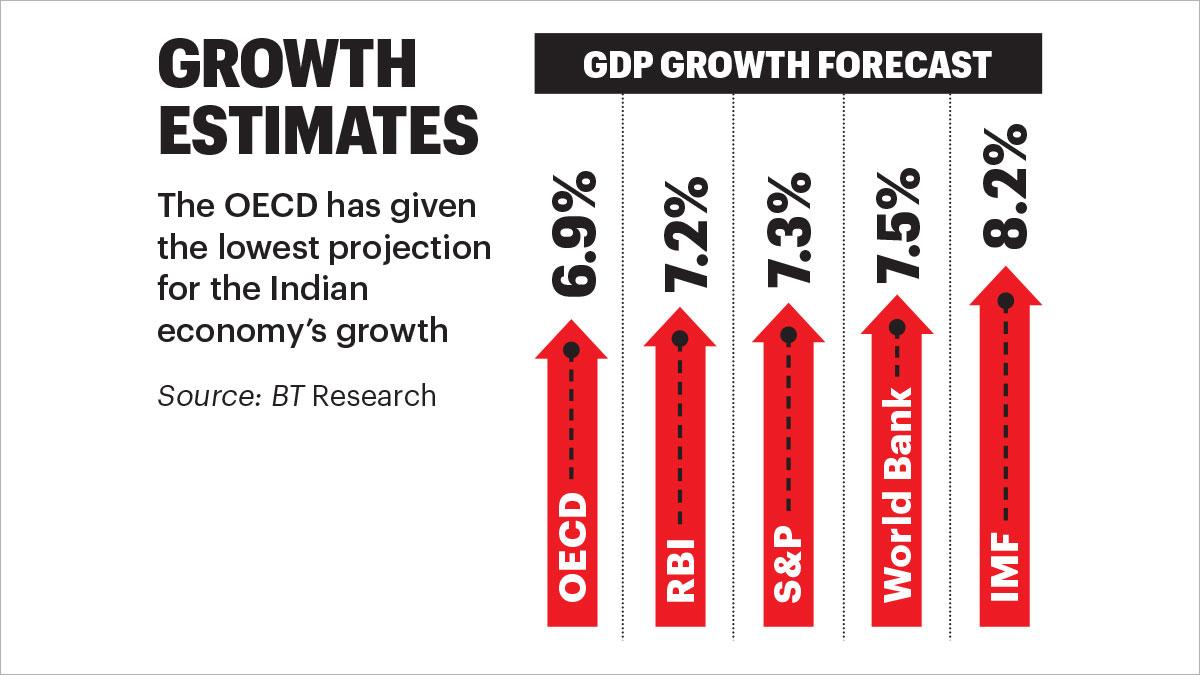 “Unfortunately, the dynamism in the economy is lost,” says former finance secretary Subhash Chandra Garg. “Agriculture continues to grow at a steady 3.5 per cent; it’s unlikely to do any better, [and] might get a little worse next year. So, let’s say industry has slowed down massively, services have done all right, but on the whole, not as aggressive growth as we had seen for many years before 2019-20. So, in FY23, we will have 7 per cent growth. And in FY24, too, we will probably grow around 7 per cent. That would be an optimistic estimate unless there are policy blunders.”

Both Garg and Bhanumurthy see India growing at 7 per cent in FY23, but the latter sees exports as a major downside risk to his projection: “One major downside risk would be how global demand for domestic commodities is going to sustain. Last year, we had achieved over $400 billion exports. So, managing that would be a big task, provided the global economy does not get into a stagflationary situation. So that would be the biggest risk and achieving $440 billion exports would be a tough task.”

Another big risk is the Russia-Ukraine crisis. Yuvika Singhal, Economist at QuantEco Research, says: “We have downgraded our GDP growth assessment for FY23 from 7.2 per cent to 7 per cent. A large part of the downward revisions are due to what is happening in Ukraine, its spillover on commodity prices, on the pace of global growth, the inflationary pressures that have exacerbated in India and in other economies, and the hastened pace of monetary policy normalisation across key economies.”

Singhal also sees inflation as a big worry: “We haven’t seen this kind of elevated inflation, which is largely supply driven. We have also not seen these kinds of price pressures since the time the RBI began its flexible inflation targeting in 2016. This time, it’s a big worry because price pressures are broad-based. My biggest worry would be the impact of inflation on consumption and, thereby, growth. Consumption is 60 per cent of our GDP. So, any kind of slowdown on that front will have a bearing on GDP growth.” At the same time, she expects retail inflation to go down later in the year on the back of a normal monsoon. “Good kharif output in September-October could provide some relief to price pressures in the second half of the year. Also, the impact of measures like the cut in excise duty on petrol and the ban on export of wheat is yet to be reflected in inflation numbers. The impact will be seen in the June inflation reading,” she says.

Not concurring with Singhal, Ashok Gulati, Infosys Chair Professor for Agriculture at ICRIER, says: “The impact of a good monsoon would be marginal. There are certain things driving up food inflation, especially imports. For example, there is 17 per cent inflation in edible oils—a good monsoon is not going to affect it because 60 per cent of our edible oil is imported. That depends upon global prices and import duty. You have reduced the duty on palm, sunflower and soya oil, but the duty on mustard, groundnut and cotton seeds oil are still at 38.5 per cent. That inflation remains sticky and it will not come down.” He says inflation in FY23 will be 6.5-7 per cent, if the economy is managed well. And pegs GDP growth at 7.5 per cent. 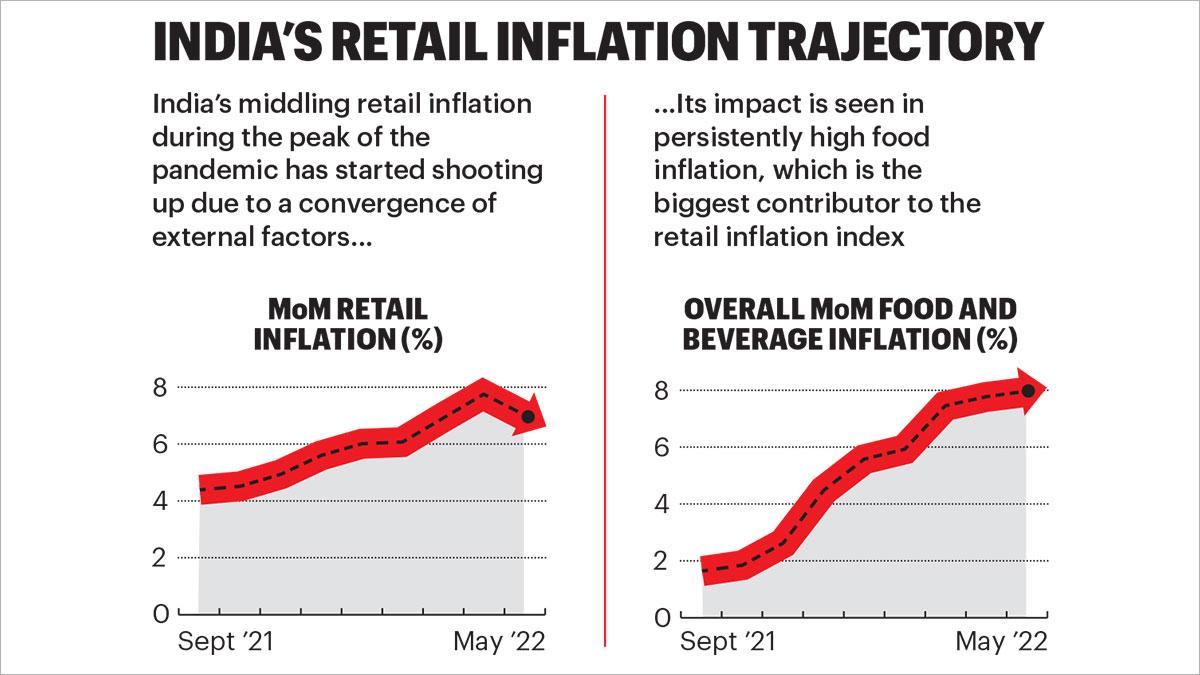 Another aspect fuelling inflation with the potential to hit growth forecasts is the volatility in crude oil prices. Narendra Taneja, a leading energy expert, believes that the next one year will be a tough one from that perspective. In addition, he sees India being more vulnerable because its dependence on imported oil is around 85 per cent. “If the Ukraine-Russia [conflict] is brought under control, then we will see oil prices come down to maybe around $95-105 per barrel for some time. But when you look at the medium- to long term, in a situation when sufficient investment has not gone into oil exploration and production, oil prices can be $100-120 per barrel, and maybe two to three years from now, $120-140 per barrel on a sustained basis,” says Taneja.

According to Garg, trade is a big determinant of the nation’s growth. Underscoring the importance of exports, Federation of Indian Export Organisation’s Director General and CEO Ajay Sahai says that in the growth of FY22, India’s 50 per cent increment came from exports: “We had $130 billion growth in merchandise and $45 billion in services, taking total exports growth to $175 billion.”

The Indian currency, meanwhile, has been in free fall ever since the Russia-Ukraine war began. At the outset of the war, the rupee was in the range of Rs 73-74 to the US dollar. It then breached the Rs 77-mark and hit an all-time low of Rs 78.29 against the dollar in early trade on June 13. Many analysts expect the rupee to drop even further to around Rs 79-80 against the dollar. The depreciating rupee is also impacting trade by raising import costs for India.

But Garg is not too worried by the depreciation of the rupee: “If the rupee depreciates, it discourages imports as they become costlier and people start reducing import consumption, but exports get a boost, so this bit works better for the external economy and for the domestic economy, too. So, if the rupee touches an all-time low and interest rates are allowed to go up, we should see the beginning of an improvement cycle in the economy that will aid economic growth,” he says. 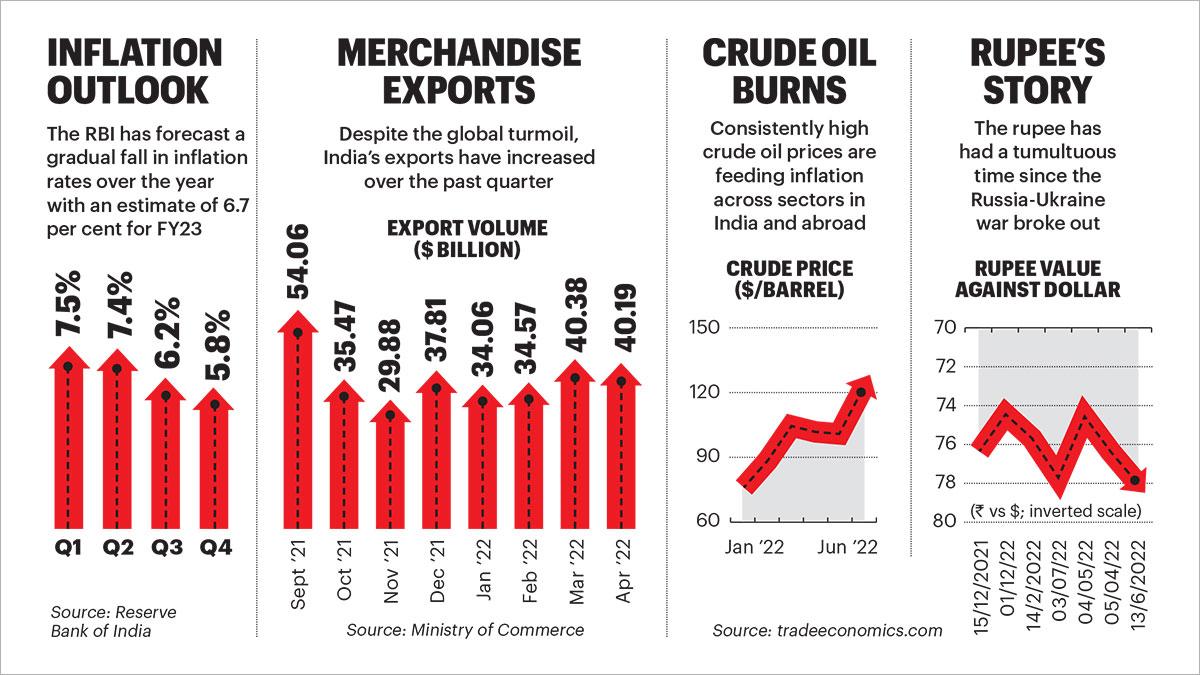 Singhal of QuantEco sees global growth as a big concern from an exports perspective and dubs currency depreciation as less of a concern. “Historically, the pace of global growth had far greater impact than currency on Indian exports. So, when the currency is depreciating, and global growth incrementally slowing, there is definitely going to be a downside as far as our exports are concerned. So last year’s export growth story will not be repeated this year largely because global growth is not going to remain the same as last year,” says Singhal. For the record, Indian exports rose to an all-time high of $418 billion in FY22.

According to experts, because of pent-up demand, we are seeing higher imports of capital goods. We are also seeing higher imports of gold in certain months because the domestic economy is opening up, and that is adding an upside to imports. Which means that on net exports, we are on an “adverse footing”, says Singhal. That is why, according to estimates, the current account deficit is likely to hit a three-year high of 1.8 per cent or $43.81 billion in FY22. The widening of the deficit will add to the depreciation pressure on the rupee, even if it’s not a major worry, according to economists. However, Sen cautions that if the rest of the world goes into a contractionary mode, then India’s exports could collapse and growth would get impacted.

Garg, who dubbed net taxes and subsidies as the third important component of the GDP, sees India’s poorly managed subsidies as a downside risk for GDP growth. “Tax growth last year was very good. But the government has expanded subsidies massively. So, fertiliser subsidies, food subsidies and, now, petroleum subsidies have come back. So, if you handle your subsidies in a loose manner, your taxation policies are also unlikely to keep the momentum. I see net taxes turning worse from the growth perspective this year,” he says. Even Gulati of ICRIER flags the issue of loose management of subsidy: “The Rs 3 lakh crore of subsidies will be an extra expenditure over and above the budgeted amount. There is no visibility of how this amount would be raised. So you raise it at one end and tax at another end.”