Business confidence tanks to its second-lowest level in nine years as respondents expect the coronavirus crisis to linger on for more than three months, reveals the latest Business Today-C fore Business Confidence Survey

As the coronavirus pandemic continues to disrupt the economy, companies across the board are facing the heat. The CEO of a large consumer products company says though some of his production lines are operating - producing sanitisers, soaps - nearly 70 per cent of the business has stopped completely. "It's a question of survival more than future investment. We are partially shielded because of the nature of our business, but activities in infrastructure, construction, transportation and entertainment sectors have come to a halt. Supply-side issues are affecting businesses that are still operating. We don't expect things to normalise in the next three-six months," he says.

Most of his views are echoed in the latest Business Confidence Index (BCI) survey for the January-March period. A total of 67 per cent respondents don't expect the recent Reserve Bank of India (RBI) rate cut to re-start the private investment cycle, while another 89 per cent believe it will take more than three months for the crisis to subside.

This, and other concerns pertaining to economic growth and uncertainty around how the situation is going to pan out, has taken a toll on the latest BCI, which - on a scale of 100 - was at 46.3, compared with 48.6 in the previous quarter and 49.1 in the quarter before that. Market research agency C fore quizzed 500 CEOs and chief financial officers in 12 cities for the survey. This is the second-lowest level for BCI since the survey started in January-March 2011. The index had recorded its lowest level - 45.1 - in July-September 2017. 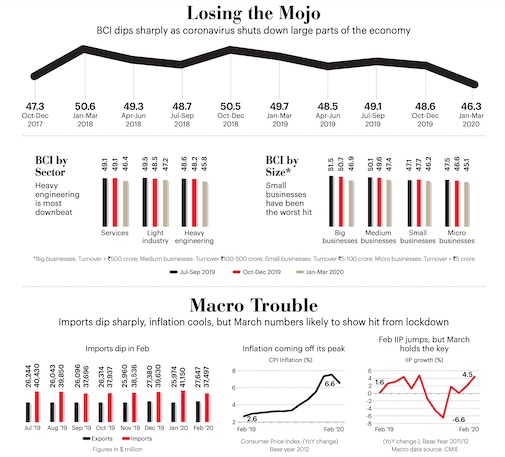 "There are two types of crises - health and economic. In both cases, we are in the initial phases. People are expecting worse to unfold from now on in terms of economic impact," says D.K. Srivastava, Chief Policy Advisor at EY.

For instance, 47 per cent respondents expect the overall economic situation to worsen in the April-June quarter as compared to 31 per cent predicting so in the previous survey. Similarly, 41 per cent believe their financial situation will become worse in the June quarter as against 27 per cent in the previous survey. About 76 per cent believe GDP growth will shrink in 2020/21. Just 6 per cent hope it will grow. Goldman Sachs has pegged the 2020/21 growth at 1.6 per cent, and Fitch Ratings at 2 per cent. ADB has estimated 4 per cent growth. "The impact of coronavirus in FY20 was limited as it disrupted just the last three weeks of the year. However, I expect real GDP growth to fall to about 2 per cent in 2020/21," says U.R. Bhat, Director, Dalton Capital.

"Domestic GDP growth will shrink but remain in the positive zone. The global economy will register negative growth. The way GDP progresses will depend a lot on economic policies of the government," says EY's Srivastava.

A total of 71 per cent respondents believe the government is doing enough to manage the coronavirus crisis. Yet, 59 per cent don't expect to make fresh investments in the next three months despite the recent interest rate cuts. On March 27, the RBI had slashed the repo rate by 75 basis points to 4.40 per cent.

"The government is taking a cautious approach which is still better than what other countries are doing. It will be difficult for them to cope with the economic crisis. The government needs an exit strategy and a stimulus package covering all sectors. But then there are several fiscal constraints given that tax collections were weak in the last financial year," says a leading economist.

Experts say fresh investment depends on capacity utilisation, demand, availability of raw material and land. Capacity utilisation across industries slipped to 68.6 in third quarter of 2019/20, as per RBI data. It could have further gone down to 60 per cent. "Private investment will take off only if India Inc is comfortable with the demand-supply equation. There are a slew of factors that have a larger impact on private investments than a cut in interest rates," says Dalton Capital's Bhat.

In the current environment, supply side has been a big challenge for the government as it has rolled out measures to ensure that essential goods are available to everyone. There are reports that the 21-day lockdown has blocked the supply chain at various levels. That's not all. In days to come, the bigger test for the government is to manage the rabi crop. "All related activities such as transportation, storage and purchases as per MSP rates need to take place in the near-normal way," says Srivastava.

The survey respondents are hoping for a marginal improvement in cost of raw material. For example, 25 per cent said it will fall in three months to June as against 20 per cent saying so in the previous survey. Nearly 34 per cent drop in Brent crude prices over the past one month has led to a fall in input costs for different sectors. But this is unlikely to cause major gains as demand has slowed considerably.

As a supplement to the survey, we do an assessment of other economic indicators. These include export-import, index of industrial production (IIP) and consumer price inflation (CPI). The numbers are bleak. While IIP grew 4.5 per cent in February, CPI was 6.6 per cent in the same month, much above the RBI's comfort zone. Bleaker numbers are expected in the weeks ahead.

With key economic indicators taking a beating, and impact of this war-like scenario beginning to unfold, the next few months are set to be the most challenging for business leaders - something that they may not have experienced before.