How Consumer Goods Firms are Grappling with Inflation

With margins rapidly shrinking due to inflation, consumer goods companies are doing all they can to keep their heads above water. But it will be tough going for some time

Since the start of the Covid-19 pandemic in early 2020, Sunita Rao has weathered many a storm. From losing her husband during the first wave to gasping for oxygen during the second one, Rao—a homemaker from a lower middle-income household who has two school-going kids—started delivering home-cooked meals around her neighbourhood in Mumbai’s Ghatkopar after her husband passed away. This gritty woman won the battle against Covid-19, but the demon of inflation is giving her sleepless nights.

The steady rise in prices of essential items—from vegetables and cooking oil to milk and rice—has not only jeopardised her household budget, but also her business. Add to that the shooting prices of LPG and petrol, essential commodities for her business. While the government has provided some relief on that front, the rising cost of school stationery and procuring smartphones for her kids have moved her household costs further north. “I had to encash one of my husband’s fixed deposits last month to meet the surging costs,” she says.

Yet, Rao isn’t alone. Thousands of Indians have been grappling with inflation for the past two years. And consumer goods manufacturers—from makers of soaps, detergents and instant noodles to companies manufacturing air conditioners (ACs), refrigerators and televisions—too, are facing the heat.

Take Nestle India, for instance. India’s largest pure-play packaged foods company with annual sales exceeding Rs 14,700 crore in CY2021, Nestle saw its margins contract significantly in the January-March quarter due to rising input costs. While the company managed to grow its sales by 9.6 per cent year-on-year (YoY) during the quarter, its cost of materials consumed surged by 22 per cent. This reflected on its profitability. In the March quarter, Nestle’s net profit inched down by 1.17 per cent YoY to Rs 595 crore. Its Ebitda margin fell by 268 basis points (bps) YoY, while net profit margin declined by 174 bps.

According to Nestle India Chairman and MD Suresh Narayanan, the costs of key raw and packaging materials are at 10-year highs. As costs continued to surge during the quarter, it impacted Nestle’s profit from operations. This was despite the firm growing its volume offtake by 5 per cent YoY and “better than expected” business through out-of-home channels, which had remained subdued for the past two years. Hindustan unilever (hul), India’s market leader in personal and home care products, reported a 10.73 per cent surge in net sales and a 5.34 per cent rise in net profit in the March quarter. But its margins, both for Ebitda and net profit, shrank by 0.3 per cent and 0.37 per cent, respectively. CEO and MD Sanjiv Mehta pins the lower-than-industry-average fall in margins to better cost management measures. “Despite unprecedented levels of inflation, we have been able to keep our margins almost flat versus last year,” he said in a post-earnings call.

Rival Godrej Consumer Products Ltd (GCPL) is feeling the heat as well. While its net sales grew 6.8 per cent in the March quarter, its net profit remained flat and Ebitda margin contracted by 3.82 per cent. GCPL CEO and MD Sudhir Sitapati says while its India business grew, international markets such as Indonesia and South Africa hurt the company’s finances during the quarter due to higher inflation. The future, however, is more uncertain. With the Ukraine-Russia conflict dragging on, the India business will be hit soon, says Sitapati. “The recent inflation brought about by the Ukraine crisis will hit our [India] P&L majorly only in Q1 (April-June 2022) and we again expect a relatively sharp drop for this quarter,” he cautioned after the March quarter results.

Ghaziabad-based ayurveda major Dabur India is no less vulnerable to inflationary pressures. With most of its portfolio being petroleum-linked, “there is huge inflation hitting us, which is putting pressure on our gross margin”, said CEO Mohit Malhotra during a post-earnings call. Significant inflation forced Dabur to raise prices by 12.5 per cent across its portfolio in 2021-22. “Inflation continues to be unabated and is reflected in WPI (wholesale price index) at 14.6 per cent and CPI (consumer price index) at 6.95 per cent in March 2022,” he added. In April, WPI and CPI surged to 15 per cent and 7.8 per cent, respectively.

Deven Choksey, Promoter of KRChoksey Group, says the continuous rise in cost of materials has forced manufacturers to cut pack sizes, especially at lower price points, to protect their margins from falling beyond a threshold. “Consumers are buying judiciously as most of them are not willing to increase their spend. Meanwhile, companies are reducing grammage. This is going to continue for some time,” he says. Reducing pack sizes for strategically priced SKUs (stock keeping units) like Rs 5 or Rs 10 packs, is a commonly used tool by manufacturers to arrest the slide in profitability. HUL, for example, witnessed its volumes fall in the rural market in the October-December quarter due to reduction in grammage, Mehta adds.

If executives at FMCG companies are burning the midnight oil to find the right value proposition, manufacturers of discretionary items such as ACs, refrigerators and televisions, too, have a lot on their minds. According to Kamal Nandi, Business Head and Executive Vice President of Godrej Appliances, shortage of components coupled with an increase in prices and a depreciating rupee has resulted in a rise of 30 per cent in manufacturing costs since December 2020. “So far, the industry has passed on only up to 15 per cent of the cost increase in the form of price hikes. In the past four quarters, a 3 per cent hike in prices has been effected every quarter,” he says. Manufacturers are left with no option but to raise prices further. That, however, would not be sufficient and companies would have to absorb a part of the growing cost, resulting in lower margins, say experts. 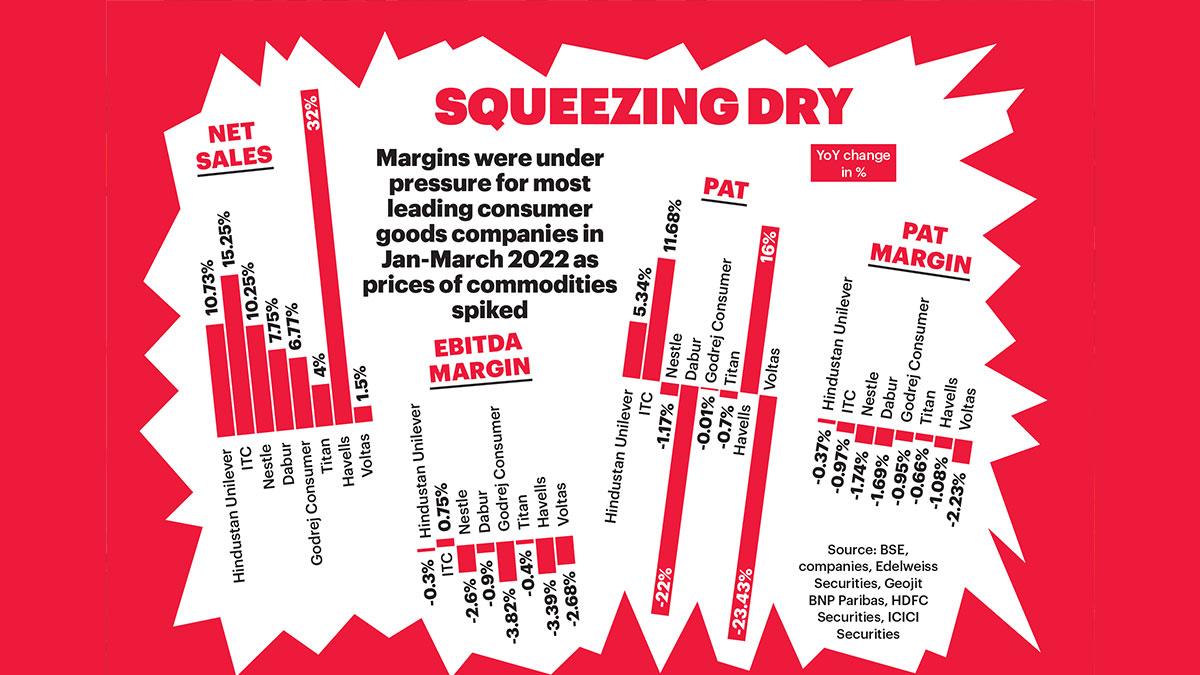 With inflation blazing away, Choksey sees no respite for consumers and companies in the near future. According to him, even if one assumes that the prices of commodities have peaked, it would take at least six to eight quarters for prices to cool off to the levels at which they were before the current inflationary cycle began.

Consumer goods majors seem to be on the same page. According to Nestle’s Narayanan, continued inflation is likely to be a key factor in the short- to medium-term. He is betting on higher levels of efficiencies and smart pricing to tide over the crisis. “We are confident of facing this turbulence with strategies of scale, efficiencies, mix and pricing, which we will deploy judiciously,” he says.

According to HUL’s CFO Ritesh Tiwari, the operating environment remains challenging, with commodity inflation continuing to be a headwind. “Recent developments have added volatility to commodity markets, pushing prices for commodities including Brent crude, vegetable oil and agri commodities even higher,” he says.

The only way out, says Choksey, is for companies in sectors such as information technology, financial services, pharmaceuticals and knowledge-driven manufacturing sectors to offer healthy wage hikes in FY23. That may help sustain volumes for consumer goods manufacturers and provide affordability to customers, he says, suggesting hikes of at least 7-8 per cent.

However, Deepak Jasani, Head of Retail Research at HDFC Securities, says there is some hope with the prices of some commodities tapering off. “Sugar prices have not surged while palm oil prices have begun to come down. While on a YoY basis direct costs are still high, sequentially they are slowly coming down,” he says. But indirect costs like fuel prices continue to be high. “So, on a YoY basis, margins will be lower,” adds Jasani. While most manufacturers have effected price hikes in recent months, consumers are also down-trading on staples. The final impact of these dynamics on companies’ margins in the coming quarters, therefore, is still unclear, he says.

B. Thiagarajan, MD of Indian AC major Blue Star, is optimistic about the future. According to him, prices of key commodities like steel, copper and aluminium—widely used in making white goods—are stabilising. “Various countries are trying to tame inflation; therefore, commodity prices are expected to come under control soon. I think the commodity cycle is coming to an end,” he says.

The pandemic may turn out to be a blessing in disguise for manufacturers as disruptions in the global supply chain over the past two years have boosted the country’s prospects as an alternative hub for component manufacturing, Thiagarajan says. Focussing on localisation of production, investment in R&D and attaining economies of scale are the only ways forward, he says. To ramp up production in the wake of higher demand, Blue Star is setting up a new plant at Sri City, Telangana, by availing the government’s production-linked incentive (PLI) scheme.

While manufacturers may have to continue to deal with inflation in the near future, there are some positives, too. But till commodity prices cool down, India Inc. will have to survive on hope.