Omicron pushes down the business confidence index again in Q3 of FY22, belying the expectations of the previous quarter with infections -- and restrictions on mobility and businesses -- rising by the day, the prognosis for the next quarter isn't too bright

After the crest, the trough. In the July-September quarter of 2021-22, Business Today’s Business Confidence Index (BCI) had hit a 10-quarter high of 49.6. Come Omicron, and the sentiment reversed, sending the BCI into a deep dive to 48.4 at the end of the October-December quarter. It is pertinent to note here that the BCI is a combined sentiment of the performance of the quarter gone by and the expectations of the coming one. So, while Q3 performance was hailed by respondents of the BT-C Fore BCI survey, they gave a clear thumbs down to Q4 business possibilities across all parameters, thus pulling overall BCI down. “The glimmer of an upside that was emerging after the festive season (October onwards) got washed out by the emergence of Omicron,” says Aditi Nayar, Chief Economist, ICRA Ltd.

The BCI survey respondents seemed satisfied with how Q3 played out for them, giving ratings above five (which is considered good) in four parameters—overall economic conditions, financial situation of the companies, demand conditions, and profit margins—with only hiring conditions at 4.9 (all on a scale of 10). However, by the time the survey ended on January 5, Omicron was in full flow, followed by the now-familiar restrictions on mobility and business. The predictions for Q4 (January-March) are, therefore, rather morose, with every one of the five parameters scoring well below five (see charts). More than 66 per cent of the survey respondents said they expect Omicron to negatively impact their businesses in Q4.

And so, putting the data for Q3 and Q4 together presents a ground image that is mostly uncertain, with BCI falling across all sizes of business, and also across heavy engineering and light industry segments. The only exception is services, whose BCI value grew to 50.1, mostly driven by the positivity in the sector in Q3. “The hospitality industry saw 70-80 per cent growth in Q2 over Q1, and Q3 built on this with about 40-50 per cent growth, driven by leisure and business travel coming back,” says Sanjay Sethi, MD & CEO, Chalet Hotels, adding that MICE, weddings and staycations also contributed strongly. The industry expected a better Q4 than Q3, which is typical, but Omicron has put paid to that. Despite the omicron surge, there is a sense of hope in the air. “Restrictions have started, but they are still mild. Compared to the previous wave, hospitalisations are lower as of now. We need to track this metric to understand how much restrictions will need to intensify, and the impact this might have on economic activity,” says Nayar of ICRA. The provisional GDP figures released by the National Statistical Office projects India’s GDP growth for 2021-22 at 9.2 per cent. That’s high growth over the (minus) 7.3 per cent in 2020-21 and, in fact, anything above 8.9 per cent would be the highest annual GDP growth since economic reforms began in 1991. Even Nayar is optimistic. ICRA had predicted 9 per cent GDP growth for FY22 before Omicron, which it has only marginally shaved. “Right now we foresee an 8.9-9 per cent expansion for FY22,” she says.

The underlying factors are giving mixed signals. While inflation—both wholesale as well as consumer—has been rising in recent months, industrial productivity has been falling, with the Index of Industrial Production (IIP) slipping since April-May. At the same time, exports—another barometer of economic activity—have taken off big-time. December 2021 has seen exports of $37.3 billion, which is the highest ever “in the history of India”, as Khalid Khan, Vice President of exporters’ association Federation of Indian Export Organisations, says happily. Not to forget that Q2 and Q3 garnered more than $100 billion each in exports, also a first. This growth came in difficult times, says Khan: “Everything was negative. Freight rates had gone up. Raw material prices were going up. But suddenly, the order books of our exporters are looking very healthy. In particular, engineering and handicrafts industries have done well.” But Nayar is quick to point out: “More importantly, domestic demand is rising, and so imports are surging. If this continues, the current account deficit is going to widen in the second half this year.” At $165.7 billion, imports, too, have been at an all-time high in Q3.

What of Q4? There are hopes of a quick recovery. “While the [third] wave is here and it is escalating sharply, our limited [medical] understanding suggests a spike followed by a steep fall. So, the disruption could be limited to one quarter,” says Nayar. Sethi of Chalet Hotels goes a step further. “This wave seems to be moving at fast-forward pace, which means we expect it to peak very quickly and then come down,” he says. “Post wave one and more so wave two, the pent-up demand activation that we saw was more than our expectations. I think the industry should get a very strong ramp-up in the second half of this quarter itself, post mid-February, which should make up some of the losses of January, subject to no other waves coming in.” 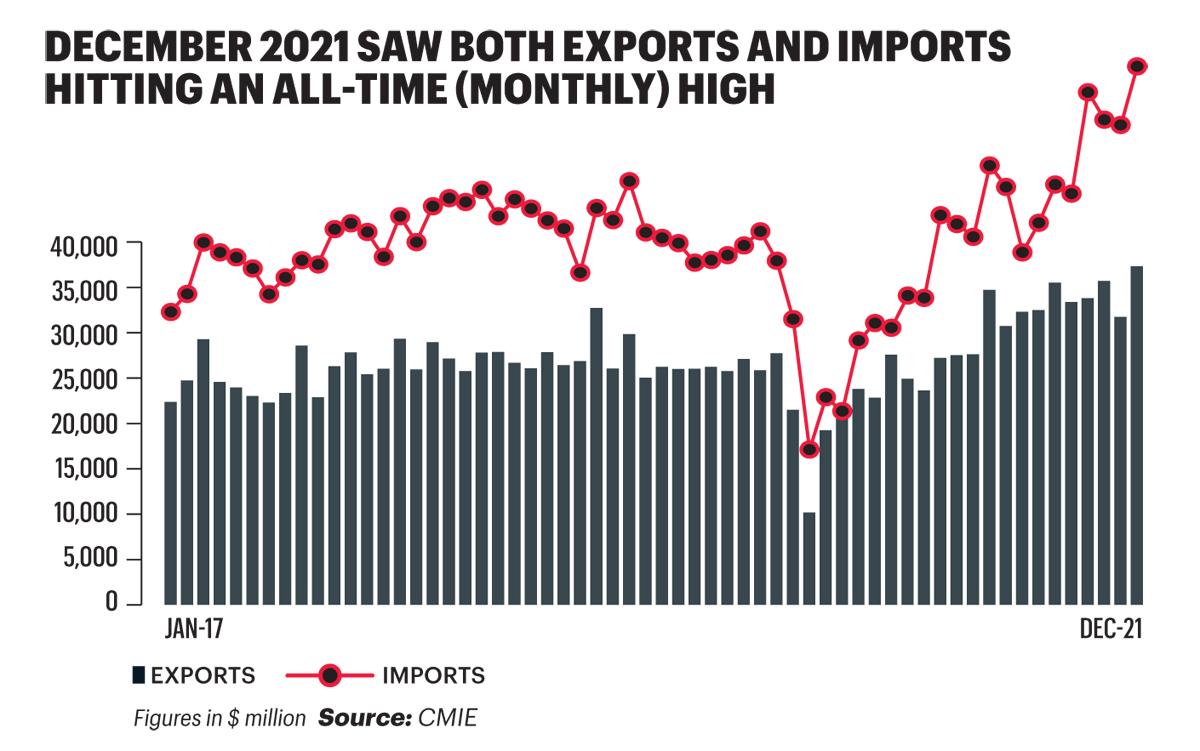 The Union Budget for FY23 is now what everyone’s looking at to keep the growth momentum going. Some respondents of the BCI survey gave suggestions for the Budget. M. Amjat Shariff, Joint Managing Director of Shriram EPC, says the Budget should focus on infrastructure and renewable energy. Jayant Paleti, Co-founder, Darwinbox, says: “[The] Indian tech/internet sector is well placed to generate employment in the country in the near future and boosting this growth trend with the right investment and sops can set the sector up to lead in the global markets.”

There is growing consensus that there needs to be greater focus on capital investments. “This should be the right time to continue the government’s investment orientation through capex and focus on sectors that act as an engine for additional job creation and demand generation,” says Satyakki Bhattacharjee, Managing Partner, GrowthSqapes Consulting, pointing to infrastructure, aviation & hospitality, e-commerce, healthcare and manufacturing as the focus sectors. Nayar says the government should build into the Budget the amount it can realistically provide for capex, and that it should plan for a normal year.

A normal year. We like the sound of that.