More than five months after the launch of the ambitious Atmanirbhar Bharat Mission by Prime Minister Narendra Modi, there's a slow realisation in policy and corporate circles that the odds are pretty much against its success. The key purpose of the mission is to not only reduce dependence on China but also provide mass-scale jobs to the large unemployed population in the country.

But for India to follow the Chinese model of becoming a global manufacturing hub - and self-reliant at the same time - having the right policy environment won't be sufficient. China could do it because of its authoritarian and centralised system. Nevertheless, the mission has just started and its fate is yet to be decided.

The growing pessimism around Atmanirbhar Bharat is captured in the latest Business Confidence Index (BCI) survey for the July-September quarter in which nearly 65 per cent respondents said the plan would increase cost of production while another 26 per cent said they expected no impact. 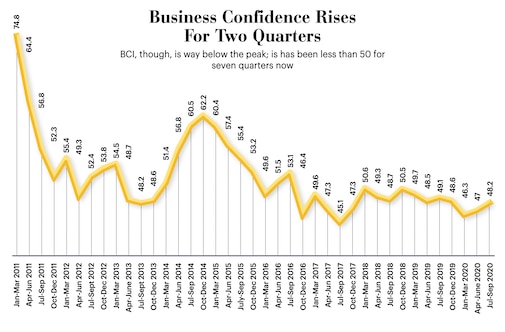 "It's a reaction to the fact that India has an unemployment crisis. There's a perception in the government that India's manufacturing is not competitive and it's been hollowed out by unfair practices, particularly by China. We have to wait and see if it [Atmanirbhar Bharat] is done intelligently," says Suman Bery, Former Member, Prime Ministers Economic Advisory Council.

As India enters the 5th phase of unlocking, business sentiments have improved marginally. The BCI - on a scale of 100 - rose to 48.2 in the July-September quarter compared with 47 in the previous quarter and 46.3 in the quarter before that. Market research agency C fore quizzed 500 CEOs and chief financial officers across 12 cities for the survey.

The reason for the jump, say economists, is that even though the lockdown was severe, the un-lockdown process is gaining momentum. "The index number is correlated with the un-lockdown process. By the end of September, nearly all economic activities had opened up. Some of the indicators are close to pre-Covid levels," says N.R. Bhanumurthy, Vice-Chancellor, Bengaluru Dr. B.R. Ambedkar School of Economics University. This is the second consecutive quarter of improvement in BCI. Since March, when lockdown was first implemented, the index has moved only up. Despite this, there has been deterioration in a large number of parameters in April-June quarter. A large number of respondents have weak outlook in areas like economic prospects, overall economic situation, overall business situation, financial situation, sales, working capital requirement, production level, availability of finance, demand, supply, cost of raw material, utilisation of production capacity, sales, exports/imports and profits.

For example, just 20 per cent respondents believe that their financial situation will improve in next (October-December) quarter as against 37 per cent hoping so in the previous survey. Several reports say companies, particularly financial institutions, are raising capital to create liquidity buffer to overcome pandemic-related issues.

Only 18 per cent respondents hope that their capacity utilisation will improve in the December quarter as compared to 63 per cent expecting the same in the previous survey. Data shows capacity utilisation is rising, says BASE University's Bhanumurthy. He says even before Covid, India had excess capacity in most sectors. "Are we going back to the pre-Covid situation? I believe yes. But it's still going to be excess," he adds.

A total of 77 per cent respondents believe the government hasn't done enough to revive the economy. This is slightly lower than the last survey number (82 per cent). Also, 68 per cent say the economic stimulus has had no impact on their businesses.

Experts say the perception among corporates is that the Rs 20 lakh crore stimulus package was largely aimed at MSMEs (medium, small and micro enterprises). "The reason the corporate sector is less enthusiastic is that it was looking for relief handouts, particularly the services sector. The government's actions were more directed towards MSMEs, which are less vocal than the large companies. Large corporates are concerned about demand stimulus. It's certainly the case that the government has done more to avoid financial crisis than to stimulate demand. That's what the disappointment is about," says Bery.

The survey shows that respondents are expecting improvement in some areas like cost of external finance, investment in business, hiring, selling prices and stock prices. For instance, 17 per cent respondents are planning to invest in their business in December quarter as compared to just 5 per cent in the previous survey. "Fresh investments in businesses are a positive sign. At an aggregate level, demand has been reviving due to unlocking and fiscal stimulus," says an economist.

As a supplement to the survey, we do an assessment of other economic indicators. These are export-import, index of industrial production (IIP) and consumer price inflation (CPI). IIP stayed in the negative zone for the fifth consecutive month. The rate of fall has been coming down though - from -57.3 per cent in April to -10.4 per cent in July. Retail inflation stayed high at 6.7 per cent in August and exports rose to pre-Covid levels in September while imports remained lower compared to months before March. One of the reasons for moderately high inflation is that the increase in aggregate supply is not catching up with the increase in demand due to a variety of reasons.

Even as corporate sentiment shows improvement, pain points in the economy continue to outnumber the comfort zones. As for corporates' dissatisfaction with the government's efforts so far, an economist quips that whether in good or bad times, they always want more.