Why Kanpur’s Tannery Owners are Struggling Despite Surging Demand

LOOKING OUTWARD: The industry is heavily dependent on other countries for accessories and components (Photos: Maneesh Agnihotri)

Heaps of leather are stacked over one another, and an overpowering, pungent smell from a concoction of chemicals hangs in the air at Homera Tanning Industries’ office in Jajmau area of Kanpur. Asad Rizwan, one of the founders of the company, is busy checking the quality of leather produced at his tannery, where raw hides are converted into leather. “Nubuck leather, aniline leather, and burnishable leather are good quality leather, while haircell leather is a mid-range leather,” Rizwan tells someone on the phone, ensconced comfortably in his corner room. On this reporter’s query, he gazes out the window and says, “The leather industry in Kanpur is booming post the pandemic. That is reflected in the strong order book of the companies. But in this industry, quality is key. Whoever will ace the game of producing quality products will grow by leaps and bounds.”

Jajmau is home to more than 200 tanneries like Homera, with a combined processing capacity of 18,000 hides daily. According to one tannery owner, Kanpur contributes roughly 30 per cent to the leather trade in India, accounting for around Rs 6,000 crore of leather exports from India to the UK, the US, China, and the Gulf countries, among others. The city’s leather industry—including tanneries and leather goods manufacturers—provides direct and indirect employment to about a million people in Kanpur and Unnao districts.

For perspective, with annual production of 3 billion sq. ft of leather in 2021, which constitutes 13 per cent of the world’s total leather production, the leather industry is among the top 10 foreign exchange earners for India.

With three tanneries and two manufacturing units, Homera exports safety and casual shoes to China, Italy, France, the US, and Germany. Ashraf Rizwan, another founder of the company, says, “We clocked Rs 100 crore revenue from exporting leather stuff abroad in FY22. It is a big rise from Rs 65 crore exports in FY21, which was marred by the Covid-19 waves. But 2014 and 2015 were the golden years for the leather industry. We exported Rs 180 crore worth of leather in FY15.” Asad Iraqi of AKI India, who owns one tannery in Magarwara area of Unnao and one shoe manufacturing unit and saddlery manufacturing unit in Jajmau, witnessed exports of over `60 crore in FY22, significantly higher than the `52 crore of exports in FY21.

“There is no doubt that post Covid-19, there is an uptick in opportunities and that is being translated into export values; the order book is very good as of now. This is because the western countries are drifting away from China, which is giving many opportunities to Indian businesses,” says R.K. Jalan, Vice Chairman of Council for Leather Exports.

However, according to industry insiders, Kanpur’s leather industry is grappling with multiple challenges, from paucity of skilled labour to lack of design capabilities, from unstable policies to logistical issues, and lack of availability of good quality and cheap accessories. “There can be no compromise on quality, which comes from skilled labour that is not available easily,” says Asad Rizwan. Adds Iraqi, who exports fashion shoes and riding shoes to Italy, the UK, Germany and Australia, and has more than 600 employees across his units: “The government’s policy and environmental rules and regulations have made it difficult for us to survive and the downfall had begun in 2014.” 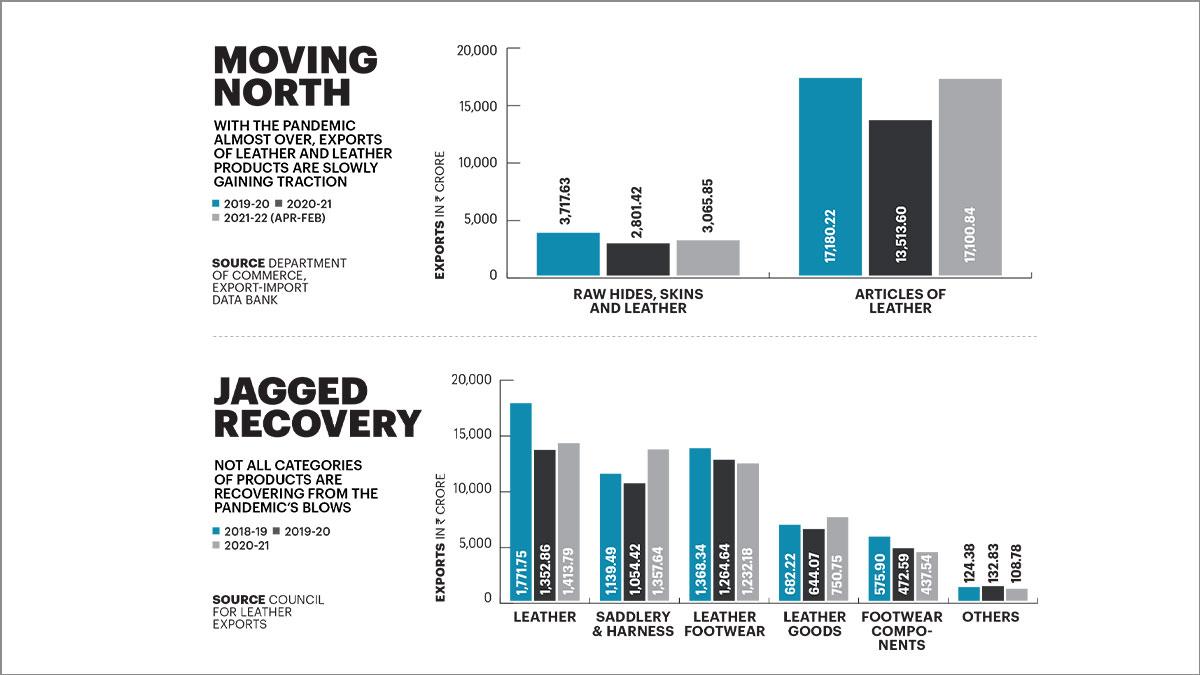 Iraqi says logistics is the biggest challenge for the leather industry of Kanpur: “The government must have a clear policy for logistics and transportation. We send our stuff through Maersk and MSC shipping companies, and now the prices are rising. Earlier we paid $1,000 per container for the UK, now it has gone up to $9,000 per container.” Rajiv Suri, Chairman of Lex International in Rai Purwa area of Kanpur, who exports saddlery to Germany, the Netherlands, the US, France, Italy and Australia, faces the same issue: “I had to dispatch my consignments to Australia; it has been more than 15 days and I am not able to find a single container.”

The industry in unison raises the necessity of having an inland freight subsidy scheme, which they believe is fully WTO compliant. “We have to bear the extra cost of transporting stuff from Kanpur to Nhava Sheva (port) in Mumbai, which Chennai and Kolkata cluster people need not pay. So, we are disadvantaged, and this subsidy scheme is important,” says Jalan. In the backdrop of limited freight trains being available, they sometimes have to send consignments via trucks, which is more expensive than freight trains. Industry players say currently there are only two freight trains run by CONCOR (Container Corporation of India) that run twice a week.

In addition to exports, importing components from other countries is also a challenge. For example, Homera imports ox leather and other good quality leather for specific products from Europe. “But ox leather is not a notified product for import at ICD (inland container depot) Kanpur, thus that raw leather reaches Nhava Sheva, from where it comes to us via trucks or trains,” says Ashraf Rizwan. “Because the raw material is not notified at ICD, we have to pay $3 extra per hide for transportation from Nhava Sheva to Kanpur. One container can have 700-800 hides, so container cost increases by $2,400 per container.” Asad Rizwan adds that container charges for Chile have risen from $6,000 to $24,000. “Similarly, for the US, prices have risen by four times, from $3,000 to $12,000,” he says.

Jalan says logistics and transportation should be the government’s focus for boosting exports: “The government should focus more on improving rail, road, air connectivity and air cargo handling. I think mega logistics parks could be game changers for an industry like ours.”

Industry folks point out that China leads in leather exports globally not because of cheap labour, but because of skilled labour, and also scale. In India, both are in short supply. In Kanpur, there is only one training institute for upskilling, which is just not enough for the city’s needs, says Jalan, who is also Director of AFPL Global. “We should have a world class training institute with international trainers for bringing in quality and for our products to be competitive in the global market.” Jalan further adds that India needs to invest in design capabilities to succeed in overseas markets: “As of now, we are doing contract manufacturing for the world. We don’t have our own brand, and we are copying different designs. The need of the hour is to have our own designs, and for that the government should invest in increasing designing capabilities.”

On the supply side, the industry is dependent on other countries for accessories and components—lining from Taiwan, chemicals and raw hides from Europe, toe caps and insoles from China, and adhesives from Italy and Germany. Any disruption in the supply chain has a big impact on the overall production of shoes and leather products. Jalan says, “We import trimmings and embellishments from China because they are better in quality and cheaper than in India. We never invested in plugging these gaps, and never invested in consolidating the components industry. That is why we are in the middle of such a crisis.”

Now that the Chinese city of Shanghai is under stringent lockdown due to rising Covid-19 cases, component supplies have been hit badly. “Our clients abroad are very specific about turnaround times (TATs). Brands like Zara have a TAT of eight weeks and if you fail to send the order within that time, they will ask you to send by flight,” says Jalan.

Policy stability is another big challenge for the industry. Tanneries on the bank of the Ganga, which discharge effluents into the river, are at the receiving end of anti-pollution drives, and many of them have shut down because of the norms. Amin believes that because of the constantly changing norms, tanneries find it difficult to function, which has a ripple effect across the industry as tanneries provide raw leather from hides.

Suri of Lex International says uncertainty over tanneries is a big challenge. But the industry is hopeful that this uncertainty will ease after the launch of a mega leather textile cluster park in Ramaipur area. “Work is going on in full force at the 300-acre park. Land acquisition has also taken place, and not even an inch of space is left in the park,” says an industry source on condition of anonymity. All tanneries will be shifted from Jajmau to Ramaipur, which is expected to put an end to the problem of effluents being discharged into the Ganga.

High power prices are also a big pain point for the industry. “The government should subsidise electricity for us. Currently, we are paying around Rs 10.5 per unit, which is not the case in any other country. I know Ethiopia or Uzbekistan charge Rs 1.5-2 per unit, but the power cost in India is too much,” says Tarique Rizwan of Homera Tanneries. Iraqi of AKI says the ideal power rate for the industry should be around Rs 5-9 per unit. He also believes that the government’s pollution policy should strike a balance between industry and environment.

Given the positive growth sentiment in the leather industry, it is time the government took cues from industry-friendly policies of other countries. Only then can India compete with giants such as China and Brazil.