Will the Sensex hit 19K?

With a stable regime at the helm, the momentum is back in the markets. But this might not be the start of a bull phase.

The stock markets are euphoric. The bulls are going for the kill. The bears are running for cover. Most investors are convinced that 16 May marked the beginning of another bull rally in India. This was the day the UPA was voted back to power, and that too without the economic shackles of coalition partners.

Expectedly, the Sensex zoomed on 18 May (Monday). Within 60 seconds, the index added Rs 3.12 lakh crore to investors’ wealth and registered its biggest single-day gain. With a stable government in power, Prime Minister Manmohan Singh is expected to pursue economic reforms aggressively and hike FDI limits to ease the inflow of foreign money. So, is it time to go shopping for stocks?

“The poll results pleasantly surprised the market. In the past five years, as the Congress was playing more of a survival game, it could not carry out many reforms,” says Nirmal Jain, chairman, India Infoline. “The time has come to respond swiftly and decisively and bring the economy to the path of at least 7% growth in the next six months,” adds Ficci president Harsh Pati Singhania.

How realistic are these expectations? Will coalition politics cease to play a significant role? More importantly, what should be your strategy now? Should you buy, hold or sell?

THE OPPORTUNITY EXISTS, BUT…

With the support of over 300 MPs in the Lok Sabha, the UPA can push through pending finance bills and reintroduce those that have lapsed. These could hike the FDI limits in insurance and banking. Manmohan Singh can even sell the government stake in profitable PSUs such as the Power Grid Corporation, Rural Electrification Corporation and Oil India. “Given the comfortable majority, reforms can be enacted at a fast pace,” says Sonal Varma, economist at Nomura Securities. However, there are a few problems. A few chinks are already showing in the UPA armour, with a leading coalition partner, DMK, unhappy with ministerial portfolio allocations. Also, the Congress has won because of rural votes, which it wooed through its aam admi programmes. “Since it is the big rural vote that has brought the government to power, its initiatives will concentrate on the social and rural sectors,” agrees Shankar Sharma, vice-chairman, First Global.

Also, there is still no consensus on big-ticket reforms in labour laws and agriculture. Even the move to allow FDI in front-end retail was opposed both by Congressmen and its partners such as the Trinamool Congress. “I expect the government to implement the reform process in a more staggered manner over the next couple of years,” adds Varma.

WHAT ABOUT THE FISCAL DEFICIT?

In the past few years, when the UPA pursued welfare schemes, fiscal prudence took a back seat. As a result, the combined fiscal deficit of the Centre and the states is expected to more than double to 10% of GDP in 2009-10. Poll promises like cheaper rice and wheat and subsidised interest rates for farmers may increase the deficit. In such a case, global credit rating agencies, which have already downgraded India, may do so further.

There will be a greater impact on deficit this year because of lower growth estimates (6%) and lesser revenues. “With the consolidated budget deficit in double digits, it would not be unlikely for the government to raise tax rates for the rich and/or for the industry,” feels Saurabh Mukherjee, head, Indian equities, Noble Group.

Manmohan Singh faces several challenges. He has to kick-start growth, create positive sentiments and control deficit. He has to pray that the rain gods are on his side as good monsoons will boost agriculture and the overall growth. He has to hope that his coalition partners support him on reforms despite differences in the past. Finally, he needs to cajole foreign investors, who are facing a severe credit squeeze back home.

WILL CORPORATE EARNINGS GO UP?

At the moment, experts are unanimous that a broad-based improvement in corporate earnings might take longer than expected. “India cannot decouple from the global markets. This (rally) is temporary. By and large our markets will follow global cues along with the government’s policy announcements on infrastructure and export growth,” says Sharma. 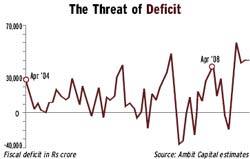 On the positive side, with the pressure on profitability easing (due to lower input costs and benign interest rates), it is believed that the worst is over for India Inc. “From three downgrades for every one upgrade over the past few months, earnings revisions turned favourable last month with 1.6 upgrades for every one downgrade,” says a report from Macquarie.

WHAT SHOULD INVESTORS DO NOW?

There’s a feeling that India may witness a huge capital infusion. Nomura expects net capital inflows of $25 billion in 2009-10, 38% higher than in 2008-9. “India will get a higher premium in valuations compared to its Asian peers,” says Anita Gandhi, head of institutional business, Arihant Capital Markets.

This and other factors, say Morgan Stanley’s Ridham Desai and Sheela Rathi, have a 40% probability of taking the Sensex to over 19,000 by end-2009. But there’s also a 10% chance of a downside—back to around 9,000 levels. So, although the Indian market is the right place to be in, it may not be an opportune time to enter the markets now. “Retail investors will get a chance to buy cheaper. There could be a sell-off that could take the markets 20% lower,” says Sharma. “We believe that in the medium and long term, the government and elections are much weaker drivers of the stock market than many believe them to be. The market is driven by the state of the economy (which is still weak) and the mood of FIIs (which has improved but can falter due to global pressures). Hence, we would urge the investors to pause,” advises Mukherjee.

However, the real cues will come in the next few weeks. Watch out for Budget 2009, monsoons, signs of recovery in the Indian economy and global cues.