It’s a question that’s taxing millions of people in this country: how will the meltdown on Wall Street impact India?

It’s a question that’s taxing millions of people in this country: how will the meltdown on Wall Street impact India? The short answer to that is: only peripherally—those employed in the India offices of the major Wall Street firms will face some turbulence; the stock markets will gyrate some more; television and print journalists will spend many thousands of man-hours analysing the whys and the wherefores of the issue; and politicians and intellectuals of all hues will congratulate themselves for having kept India insulated from the fallout of what is definitely the worst global financial crisis since the Crash of 1929. 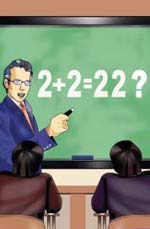 However, the crisis in the US, and some other parts of the West, does have important lessons for us; and it’s important that we draw the right ones. We have heard from the policymakers, including Finance Minister P. Chidambaram, that Indian markets are safer than those in the US and most others. Is this by design? Or default? The distinction is important to ensure that we remain unscathed in future, too.

One of the reasons for this relative safety is that we are not yet as globalised as many other countries are. Expectedly, politicians on the Left wing of the Indian polity and their fellow travellers are tom-tomming this isolation as an “achievement”. Tragically, even centrist politicians are buying this argument. There’s a very real danger that India will end up drawing the wrong lessons from the crisis.

The fact is that the Indian financial sector is nowhere near as reformed as it should be. This results in suboptimal allocation of resources and high operating costs. To celebrate this non-achievement on the reforms front is to worship at the altar of a very mediocre status quo, as the opportunity cost of not reforming is infinitely higher than the actual losses that may indirectly result from reforms. Tragically though, the bigger opportunity loss is less visible than that smaller actual loss that individual firms may suffer.

It must also be noted here that financial market reforms—like the pension, insurance and banking sector reforms that India has been dragging its feet on— invariably result in greater economic activity, and the multiplier effect lifts the living standards of individuals not even remotely connected to the sector. Example: a boost to the insurance sector will make more funds available for infrastructure projects, which will benefit everyone from the tycoon at the helm of the company implementing the project, to those sections of society whose lives become easier as a result of such infrastructure, to daily labourers who get assured work for longer periods of time.

Interestingly, parallels are being drawn with the East Asian Crisis of a decade ago. There, too, India’s relative isolation stopped the contagion from washing up on our shores. But here, too, we drew the wrong lessons. In every case, then and now, the countries affected had far higher standards of living than India’s. So, the choice seems to be between remaining isolated and poor on the one hand and being connected with the rest of the world, occasionally facing an ebbing tide that lowers all boats, and then rising together again.

Distinction also needs to be made between institutions and individuals... Right institutions or instruments in the hands of wrong individuals can lead to disastrous consequences. The US situation is partly explained by this. At the same time, the crisis also proves that regulation— as distinct from the micro-management that it often degenerates into in India—has a lofty place in the world’s, and India’s, financial market infrastructure. It is nobody’s case that Indian markets should be reformed to benefit the investment bankers and other moneybags who so visibly gain from such initiatives. We must reform our financial infrastructure so that the housewife in some small town, the labourer at a road-building site and the vegetable seller at the street corner can also look forward to a better tomorrow.