In this period, a measly amount of less than Rs 400 crore has been collected under the voluntary option that is open for citizens aged between 18 and 60. This pales in comparison with money flowing into pension schemes of insurance companies where premium collections in 2007-08 were over Rs 31,000 crore, but which dropped to Rs 19,000 crore in 2010-11 due to the impact of the revised norms on unit-linked insurance policies (Ulips).

The stuttering NPS had its first institutional casualty recently when IDFC Pension Funds Management Co, one among the first batch of six pension fund managers licensed by the Pension Funds Regulatory and Development Authority (PFRDA), let its contract lapse when it came up for renewal on October 31.

Other than the insufficient business volumes, the income on whatever was on offer was also not adequate. The good news is that things are changing for the better. The regulator has revised the fund management fees from a minuscule 0.0009 per cent of assets under management to a somewhat healthy 0.25 per cent, while the Rs 20 fee allowed for each account opened by the points of presence has been increased to Rs 100. There have been more moves to make the scheme attractive both for the seller and the buyer. Our cover story tells you all about that. 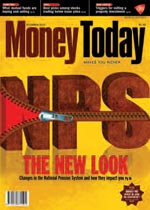 Money Today's latest issue
It may be worthwhile to give the NPS a look, if you haven't so far. With its attractive features, including flexible investment options with varying degrees of exposure to equities, the NPS holds the promise of emerging as one of the best retirement savings tools in the country.

The PFRDA chairman, Yogesh Agarwal, says in an interview that "NPS is the only genuine pension product" in the country. Investors would do well to lock in some portion of their funds into the NPS early in lives to take advantage of the compounding effect.

All stakeholders of NPS, including subscribers and fund managers, would do well to remember that retirement planning is for the long haul. Since inflows are sure to grow with the evolution of the scheme and on the back of new marketing initiatives, the changes will also make NPS an attractive business proposition for fund managers.

Remaining with the fund management theme, we provide you some interesting investment insights into mutual funds. We look at how some of the oldest fund schemes stack up as investment options, while we analyse schemes that have been around for less than three years and see how they fare. You might find good investment options at both ends of the spectrum.