From the Managing Editor: December 2014

Foreign institutional investors (FIIs) are making a beeline for India since the new government took over at the centre. Nearly Rs 50,000 crore net investment has flown into Indian equities since May 16 when the National Democratic Alliance government came to power, while another Rs 1,10,000 crore has found its way into the debt market.

In comparison, net inflows in stocks were a pale Rs 22,000 crore during the corresponding period in the previous year, while there was a net outflow of nearly Rs 80,000 crore from debt instruments. What is fanning FII interest in India? At the base of it, of course, is the prospect of making good investment gains given the current buoyant sentiments. Over the past months, the equity market has been on a roll with the indices touching new highs.

The benchmark BSE Sensex closed above the 28,000 mark for the first time on November 12, a 16% gain since May 16, and a 32% gain since the beginning of the year, making it the best-performing market in the world during 2014. Inflation has been on a downward spiral with October wholesale price index (WPI) touching a five-year low of 1.77%. Expectations are also building that the government's 'Make in India' campaign would attract foreign direct investment and provide a major boost to the manufacturing sector. 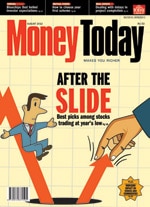 Money Today
On top of all this is hope for economic reforms the new government is holding out and its efforts to ease doing business. There is surely money to be made in this market as experts predict a multi-year bull market in Indian stocks.

Tracking FII moves could be a good way to understand market trends. With their armoury of researchers and knowledge of markets and stocks they are better equipped than any retail investor to take investment calls.

In our cover package, starting on page 16, we bring you sectors and stocks that they are betting big on. It could give you an indication on where to put your money. Our analysis shows that there has been a major shift in FIIs' sector preference during the past six months compared to what it was a year ago. The financial sector stocks have attracted maximum investment since May 16 with Rs 11,456 crore. The sector, in fact, saw an outflow of Rs 5,981 crore during the same period in the previous year.

There has been multi-fold increase in net inflows into the telecom sector, which has come as the second in the most-favoured list with investment of Rs 7,439 crore. Software and services, which topped the list last year, has now slipped to the number four slot. We bring you stocks in which FIIs have been consistently raising their holdings during recent months. There is a large universe to choose from.

However, remember, equities are a risky game and there will always be chances of losses. Hence, debt should be an integral part of your portfolio. Thus, we also tell you why FIIs are pumping in huge amounts into the debt market and how you should position yourself on fixed-income securities.