Business Today showcased the rapid strides made by women in corporate India at a glittering ceremony in Mumbai. It was an evening to remember. Business Today's Most Powerful Women in Indian Business awards ceremony -at Mumbai's ITC Grand Central on September 10 - saw a packed house. As always, the event celebrated the remarkable achievements of the awardees. Some had taken up challenging roles successfully, some came up with innovative solutions in a competitive market while a few others reinvented themselves to impact their organisations and the community in a big way. 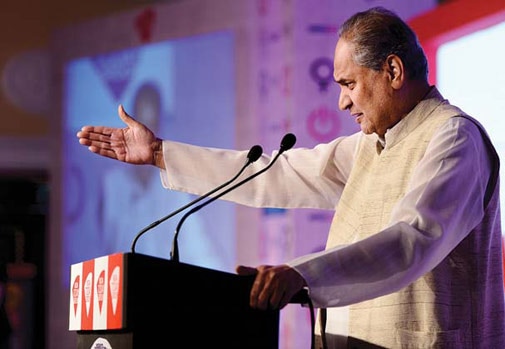 Rahul Bajaj, Chairman, Bajaj Auto, addresses the audience at BT's Most Powerful Women in Indian Business awards
The awards were given by chief guest Heather Bresch, CEO of global generic pharma giant Mylan, and Raj Chengappa, Group Editorial Director (Publishing) of the India Today Group. Bresch pointed out that the US numbers did not differ much from the Indian numbers, when it came to women entering the workforce and eventually reaching the top of their organisations. Women only account for six per cent of the senior management in corporate India and at the board level they are even lesser.

Mylan CEO Heather Bresch (left), talks to Nita Ambani, Director, Reliance Industries, at the awards
Bresch asserted that the best management style has to be open, and must welcome diversity. "Most people want work ethics, competency? irrespective of gender." Women bring unique skills to management, stressed Bresch, adding: "Women are better at multitasking, tend to be more compassionate and can be more balanced."

Founder, MD and CEO of Multiples Alternate Asset Management Renuka Ramnath (left) shares her views with a guest at the awards
The award ceremony was preceded by intellectual sparring, as top women business leaders - and some men as well - took part in two panel discussions. "Glass ceiling: Are there some industries that are still women-unfriendly?" was the topic for the first. The panellists came from a wide array of sectors. Veteran corporate lawyer Pallavi Shroff, Managing Partner of Shardul Amarchand Mangaldas; Radhika Piramal, MD of VIP Industries; Jyoti Deshpande, Group CEO and MD of Eros Interna-tional; GE's Chief Commercial Officer for South Asia, Ipsita Dasgupta; and Santrupt Misra, Group HR Head, Aditya Birla Group, took part in the brainstorming session.

Heather Bresch, Mylan CEO and Raj Chengappa, Group Editorial Director (Publishing), India Today Group, field questions from the audience at the event
The second panel had India's top banker Arundhati Bhattacharya, Chairman of the State Bank of India. Joining her in the discussion was Aruna Jayanthi, CEO, Capgemini India; Kirthiga Reddy, MD, Facebook India; and Renuka Ramnath, Founder, MD and CEO of Multiples Alternate Asset Management. The discussion was moderated by Sudhanshu Tripathi, Group President-HR of the Hinduja Group. This group debated the topic: "Mid-career breaks: Is it difficult for women to come back?" The panelists believed that there was a dire need for organisations to fix the issue of 'leaking pipeline', referring to the trend of women give up their careers early.

Has tech levelled the playing field between small and big companies?