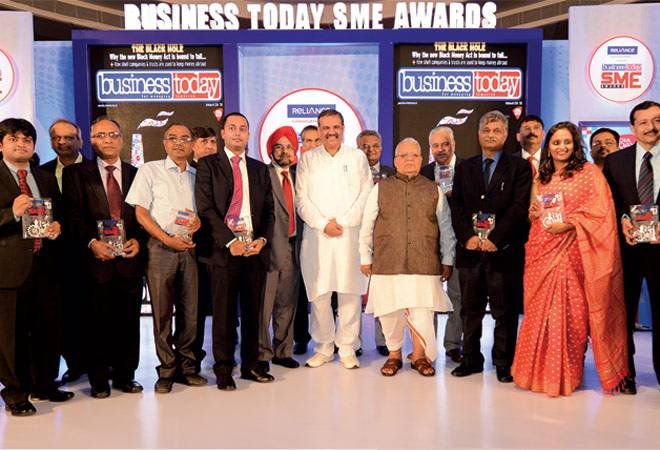 The excitement was palpable, as the banquet hall at the Hyatt Regency steadily filled up on the evening of September 23. And why not, considering the occasion. This was the awards event for the sixth Business Today Best SME Awards, an occasion graced by Kalraj Mishra, Union Minister of MSME, as chief guest. Vijay Sampla, Union Minister of State of Social Justice and Empowerment, graced the function as the guest of honour. Then there was K.V. Srinivasan, CEO of presenting sponsor Reliance Commercial Finance, Ashish Bagga, Group CEO of the India Today Group, Prosenjit Datta, Editor of Business Today and, of course, there were the representatives of the companies that were nominated for the awards. Woman power: Aakanksha Bhargava, CEO of PM Relocations, receives the award for the Best Woman Leader
India Today Group's Bagga set the action in motion. While welcoming the distinguished guests, he said when BT first launched the Best SMEs survey six years ago, the idea was to identify SMEs that were doing exemplary work and recognise them for their contribution to the economy. "I am happy to share that our objective has been well met over the past few years," he said. 'To make India a manufacturing hub, small businesses must be given the right opportunities and facilities in India's villages', says Kalraj Mishra, Union Minister of Micro, Small and Medium Enterprises
Reliance's Srinivasan pointed out that his company had made SMEs the core of its business, and disbursed more than Rs 50,000 crore worth loans over the past few years. "A large chunk of that has come back," he said, adding that he has noticed a sea change in the attitude of SMEs towards new technologies, and also in bringing in greater governance in their companies. 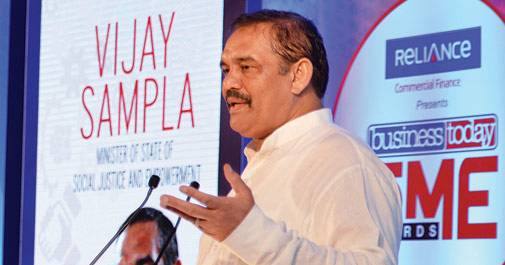 Members of the jury: (L to R) Anil Bhardwaj, Secy-Gen, FISME; Vivek Kulkarni, MD, Brickwork Ratings; Mahendra Swarup, MD, Avigo Capital
Mishra gave a rousing speech, where he spoke in detail about the need to encourage and empower SMEs, and about the various schemes that his ministry had launched. "Everyone in India - policy makers, intellectuals, businessmen - recognises the power of MSMEs to propel India into becoming a developed country," he said. "To make India a manufacturing hub, small businesses must be given the right opportunities and facilities in India's villages." The minister urged people to invest in small businesses in India. He also announced that the MSME ministry would soon launch an Udyog Aadhar Card for MSMEs.